Voronoi map in the compositor

I just saw this on codegolf and thought it would be an increadibly cool application of the Blender compositor for NPR. Perhaps coupled with a blur shader this could make a nice painterly effect. Is there any way of creating a Voronoi map effect in the compositor?

This is the effect (from the codegolf topic above): 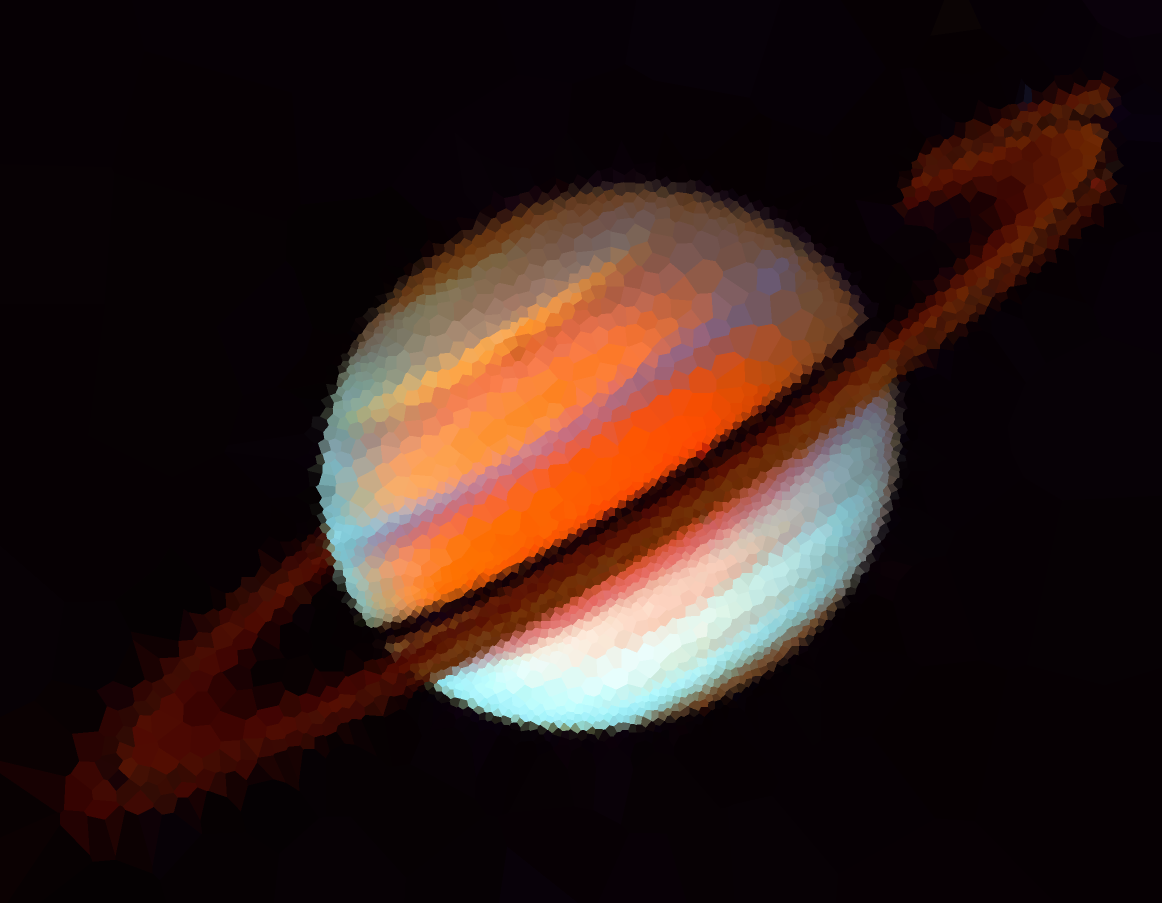 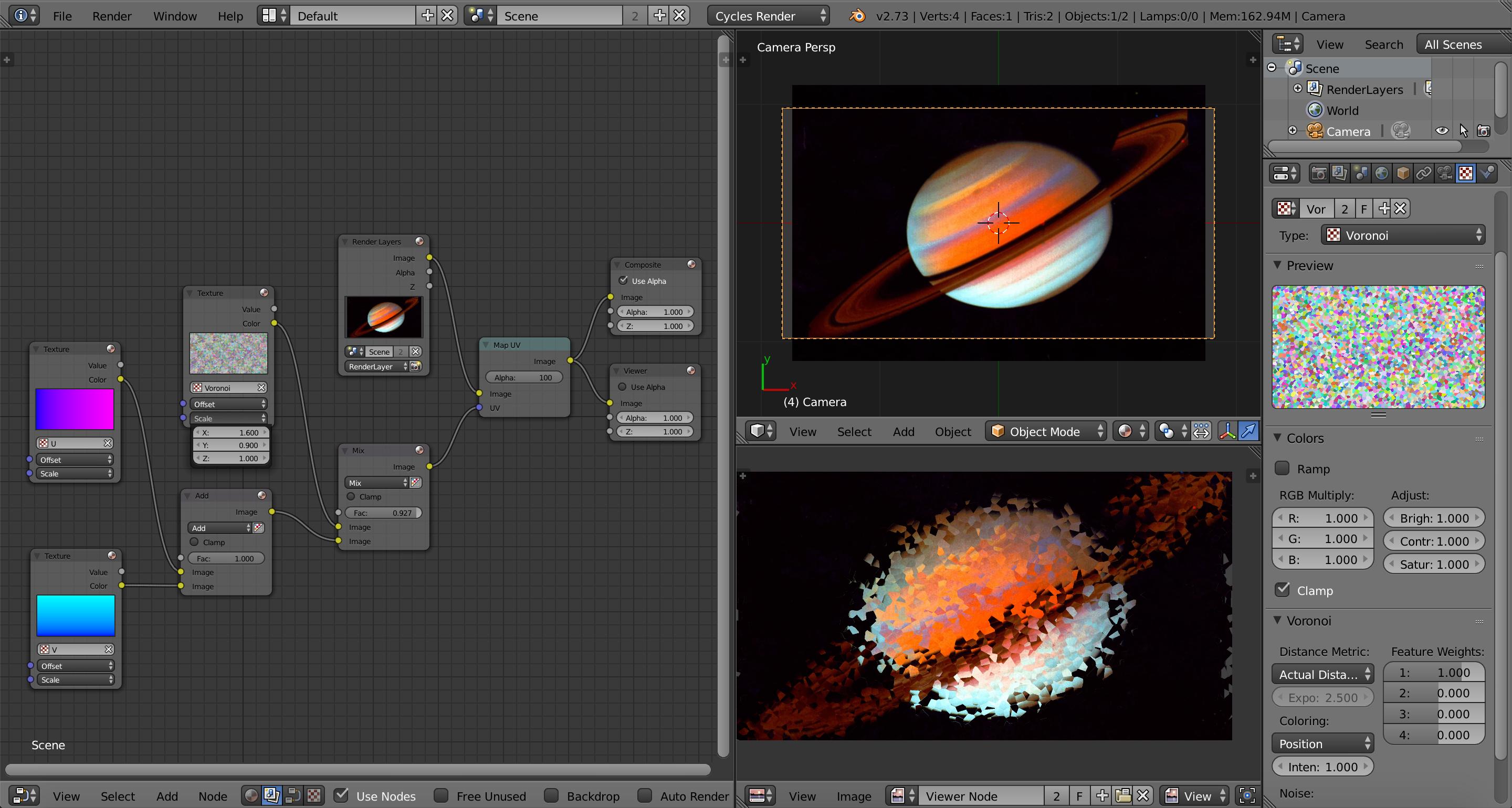 This is about as close as one could get, I think. The scale of the voronoi texture could maybe be controlled by the image if you ran some filtering to find edges. (which just requires placing the source image ontop of itself with "difference" mixing, and shifting the upper image by a pixel or two on both X and Y)

There are multiple things happening in the algorithms presented in the link you shared, but the most important thing that's happening is not possible in Blender's compositor.

Now, in theory you could reduce that set of instructions into just one step

but to do that is no small chore

I'd like to offer up the code for a python compositor node that just does all that for you, but it would just take a terrible amount of time. An onerous amount of time. Enough time that the short answer to your question is "no."

On the other hand! If you're also interested in exploring the general effect and breaking out of the compositor-node-constraint, there are other things you could explore. (in your comments, it seems you're only interested in voronoi specifically, but i'll try anyway)

Here's an image that was made with a "lens" made from a box, one side heavily subdivided, displaced with a cloud texture, and then decimated. The lens is using a glass texture with 0.02 roughness to generalize the colors coming through each face. If the displace filter was made to transpose over time, the facets would change and shimmer.

While it's not exactly what you asked for, in my opinion, it falls into the non-photo-realistic category. I think you could go quite far with it -- especially with render layers feeding into the compositor. 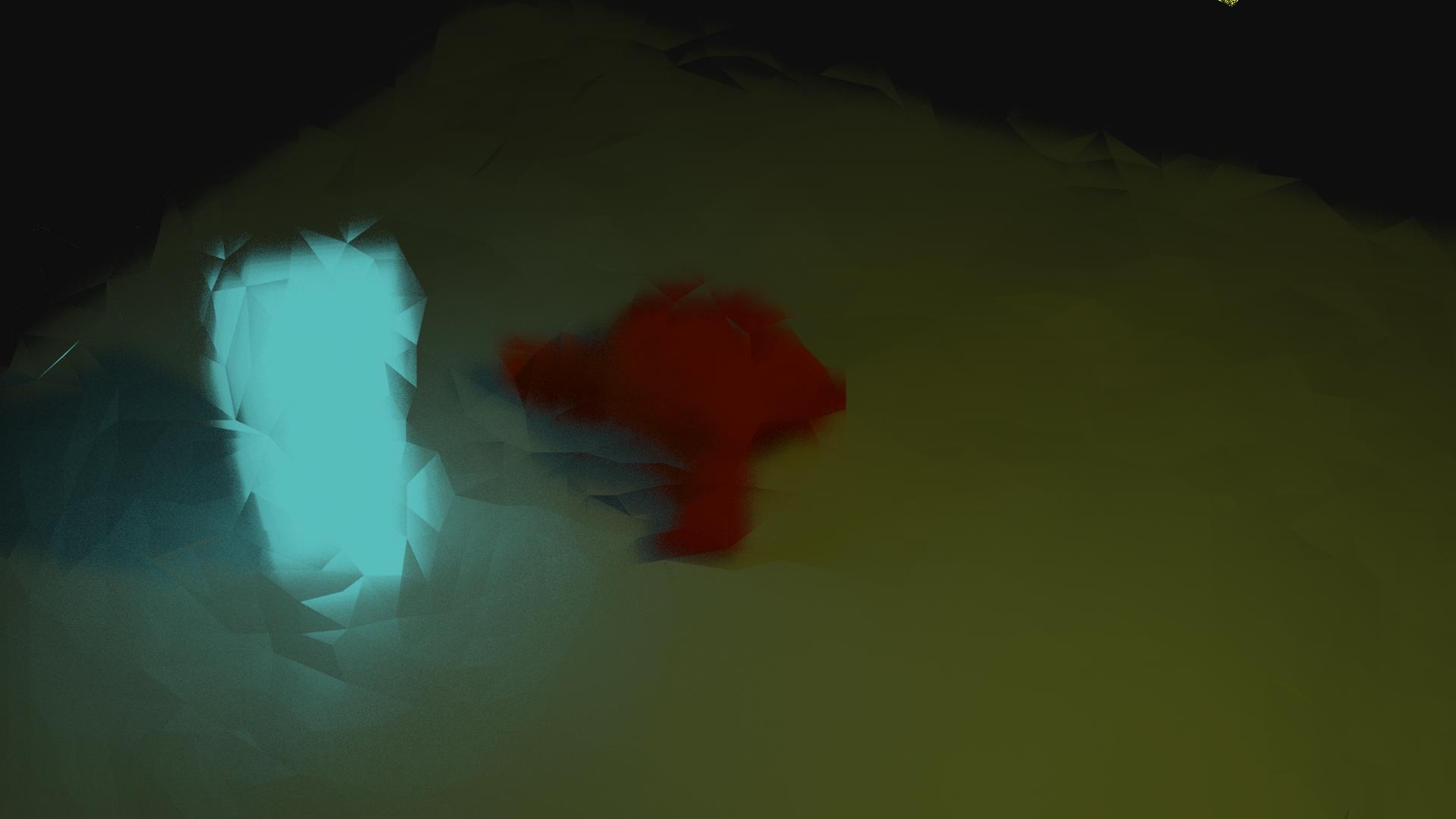 Create an image pane with the image you want to distort. Place a new plane between the image and the camera and add a glass texture to it. 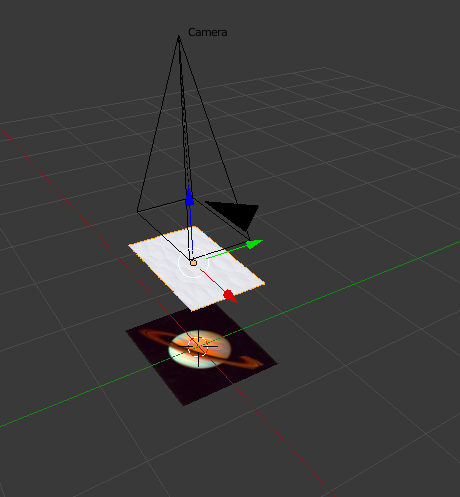 Subdivide the glass plane and apply a displace modifier that uses the voronoi texture. 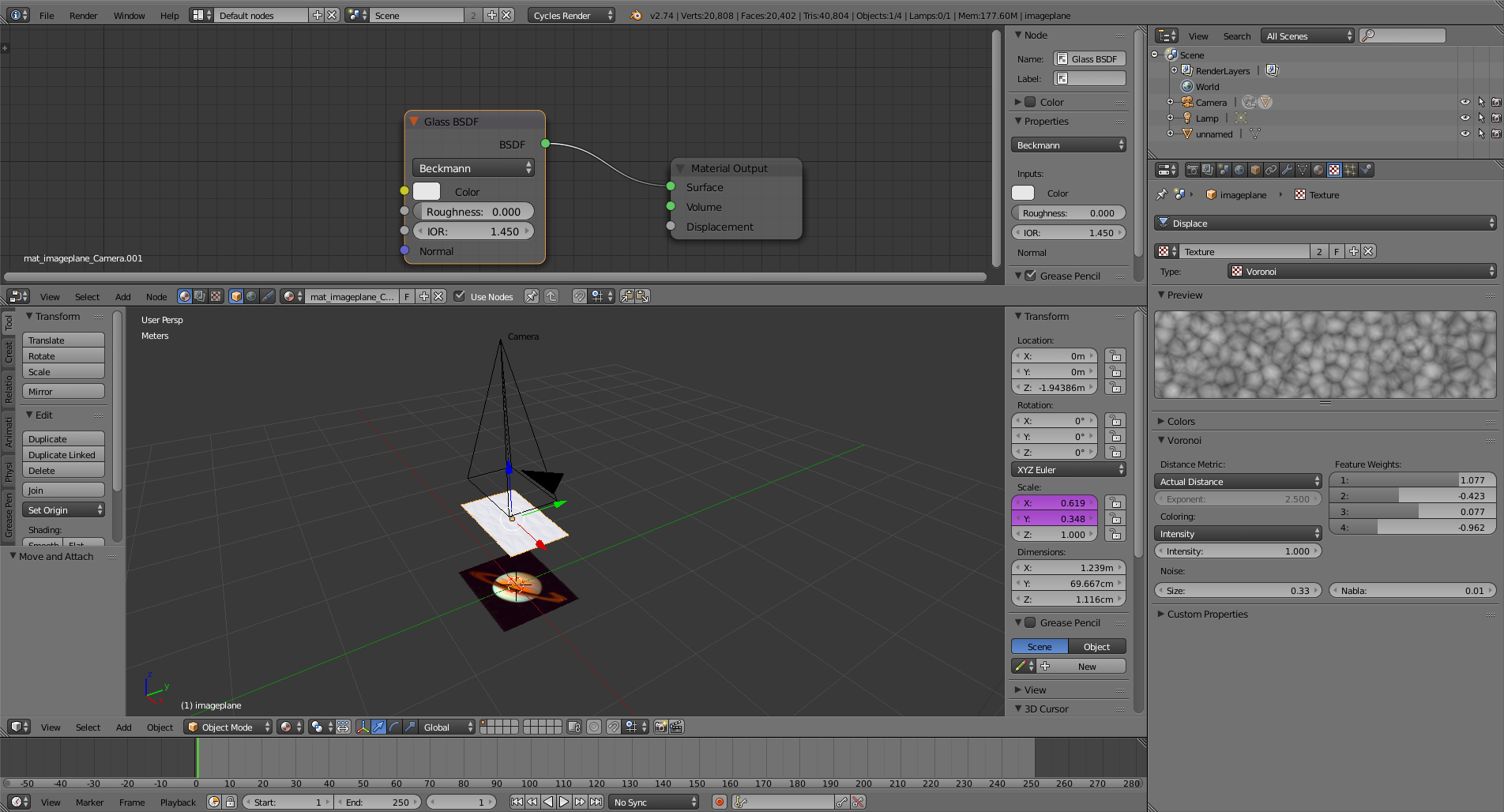 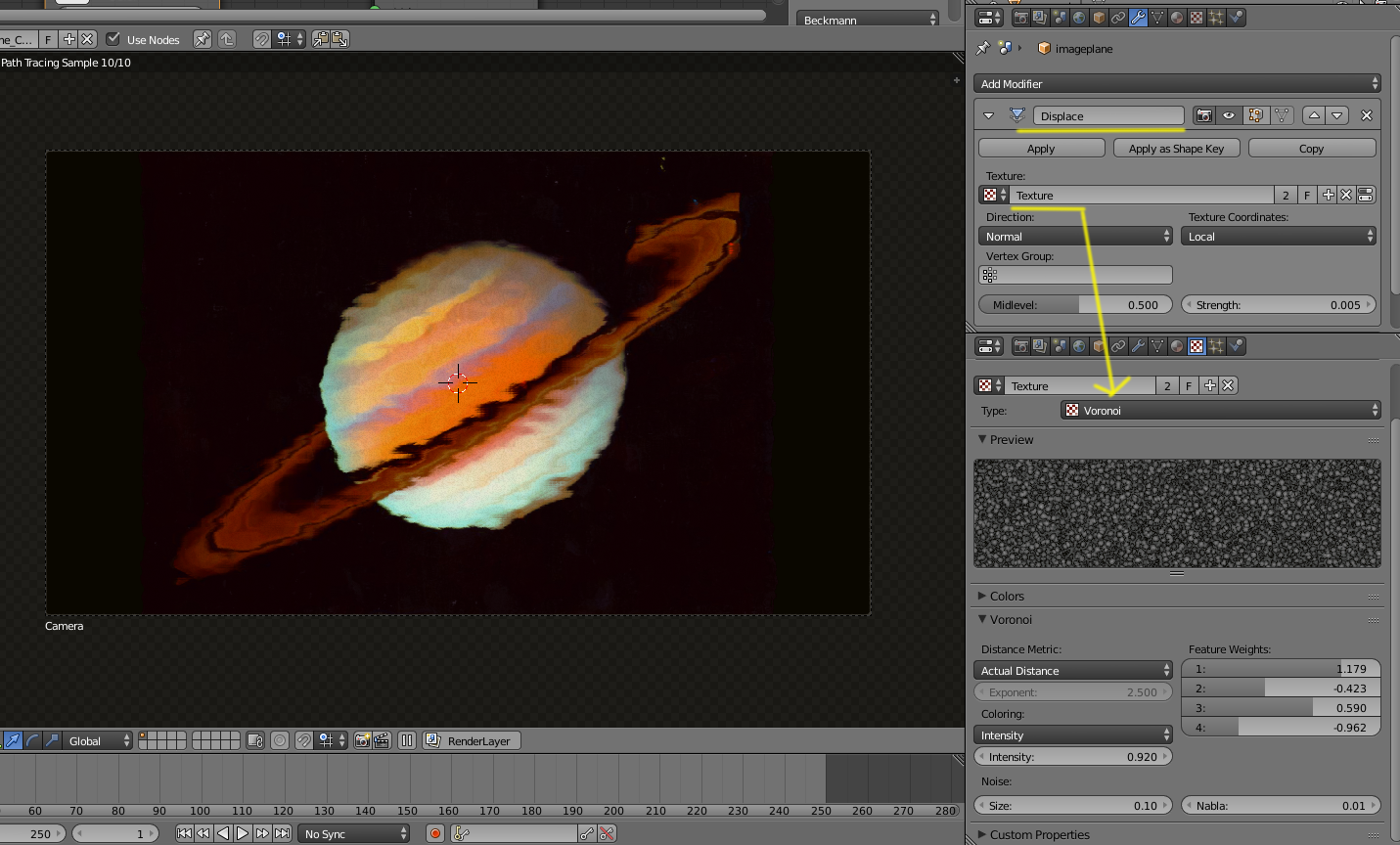 By changing the parameters on the texture you can get to the results you're after.

Not the answer you're looking for? Browse other questions tagged rendering nodes compositor npr or ask your own question.

0
How do I achieve this color effect in the compositor?
1
OSL: Can I use a closure as an input to an OSL script?
2
Object not showing up in final render when using compositor
1
Rotated Gradient Blur in Compositor
0
render compositor only in 2.8