How to create a Nebula in Cycles?

I'm trying to create a Nebula walk through using Blender but my final art is unrealistic. I would like to create a realistic nebula without Image backgrounds... I used particle System and clouds, but the isn't realistic. Any suggestion? Or tutorial? Thans in advance.

Update 1: It seems that the best approach is using the "Quick effect smoke." I'm working on it and here you can find my first render... 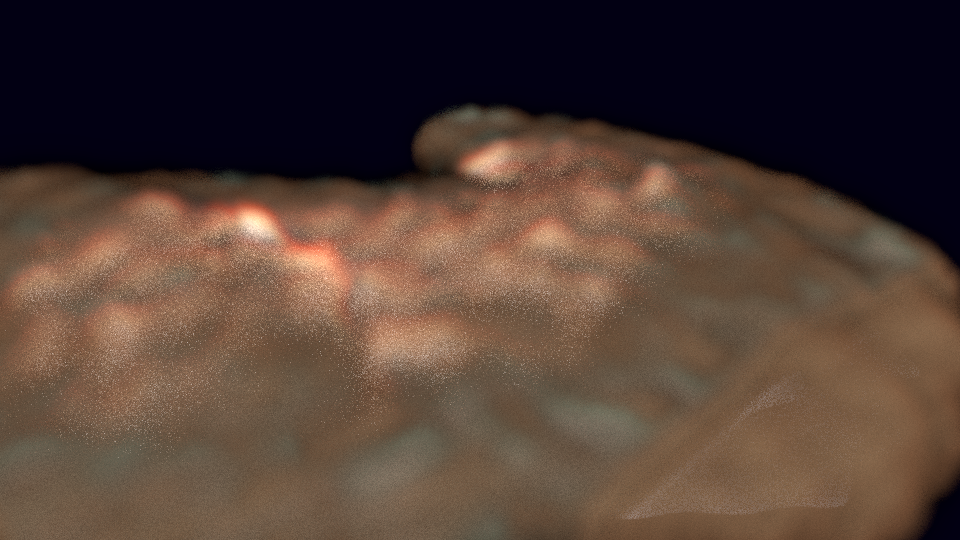 Update 2: More tests. Now the background is a Ocean System and Clouds with Particle System... I think looks better... 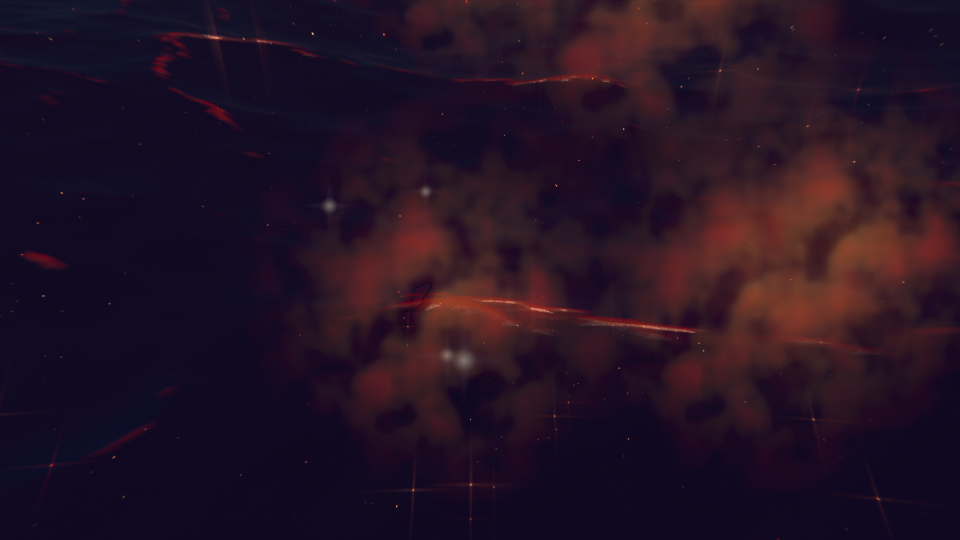 Final Update: The easyest way is create an Ocean (via Ocean System) in Cycles render and some durst and stars (via particle System) in Blender render; and mix both scenes in Compositor. Here you can find the final render... https://youtu.be/-Lx_U_Z3Z6s

Here's what I came up with using the ocean modifier and a volume shader: 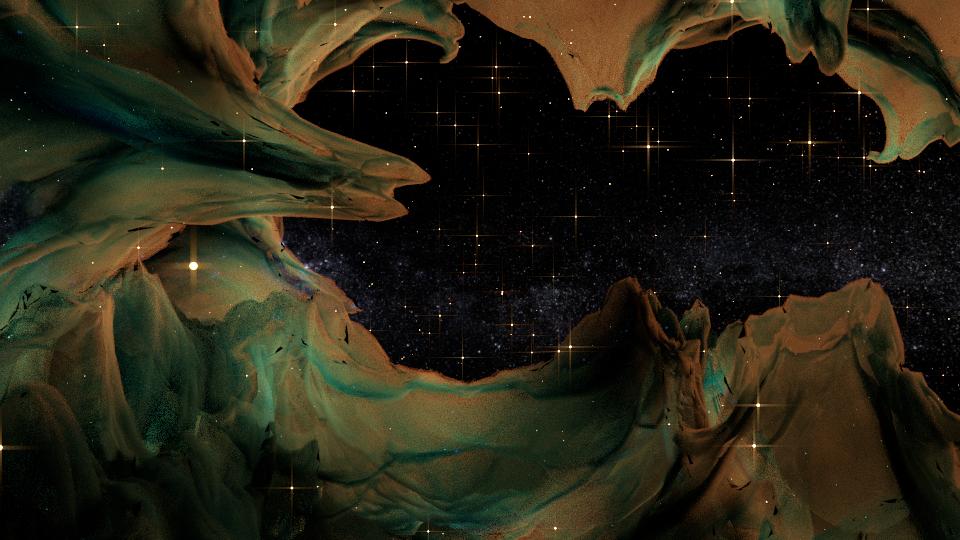 I used a cube with a volume emission particle system to add stars: 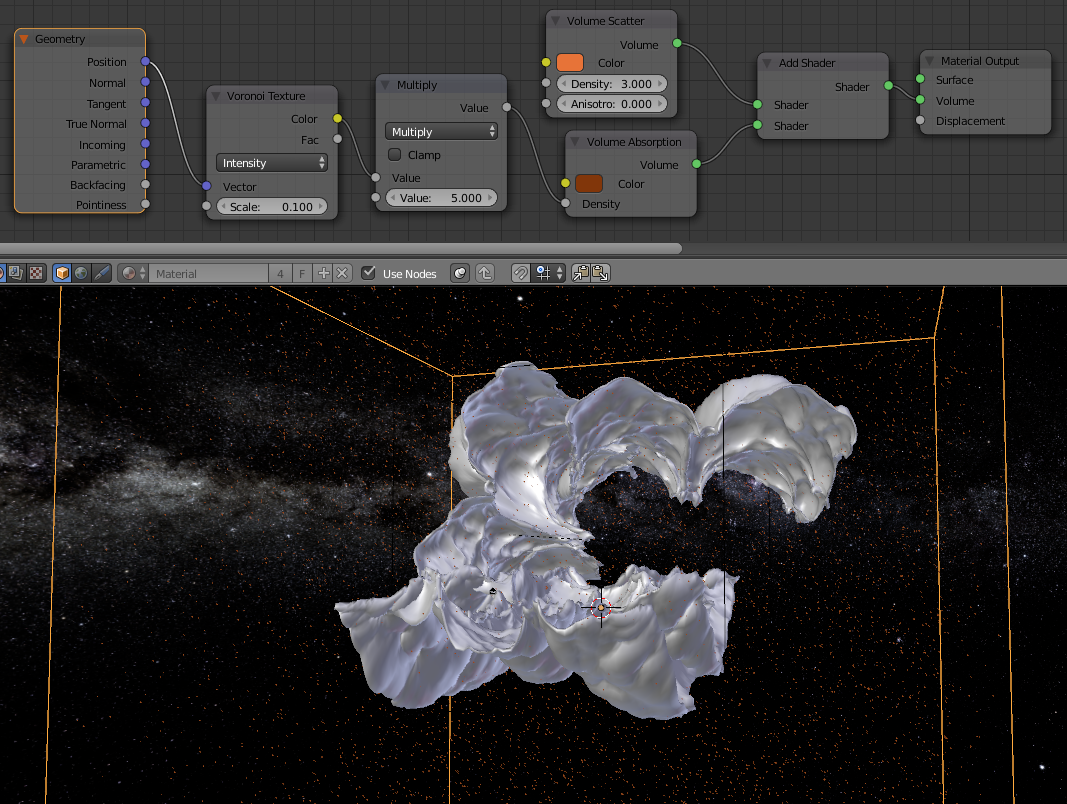 I had planned to use a smoke simulation with the ocean objects as emitters, but a smoke rendering bug is preventing me from testing this atm.. Will update further once the bug is fixed.

I've been experimenting a little, but I've mostly used Blender Internal, and only recently started using Cycles on a more regular basis, so this isn't perfect, but it may serve as a starting point. And to be clear: This isn't intended to create a nebula shape from a primitive object like a cube or a sphere, by just varying the density. Perhaps it can be built on to create something that does that, but probably not. Either way, with this setup, the shape has to be modeled.

This is an overview of the material: 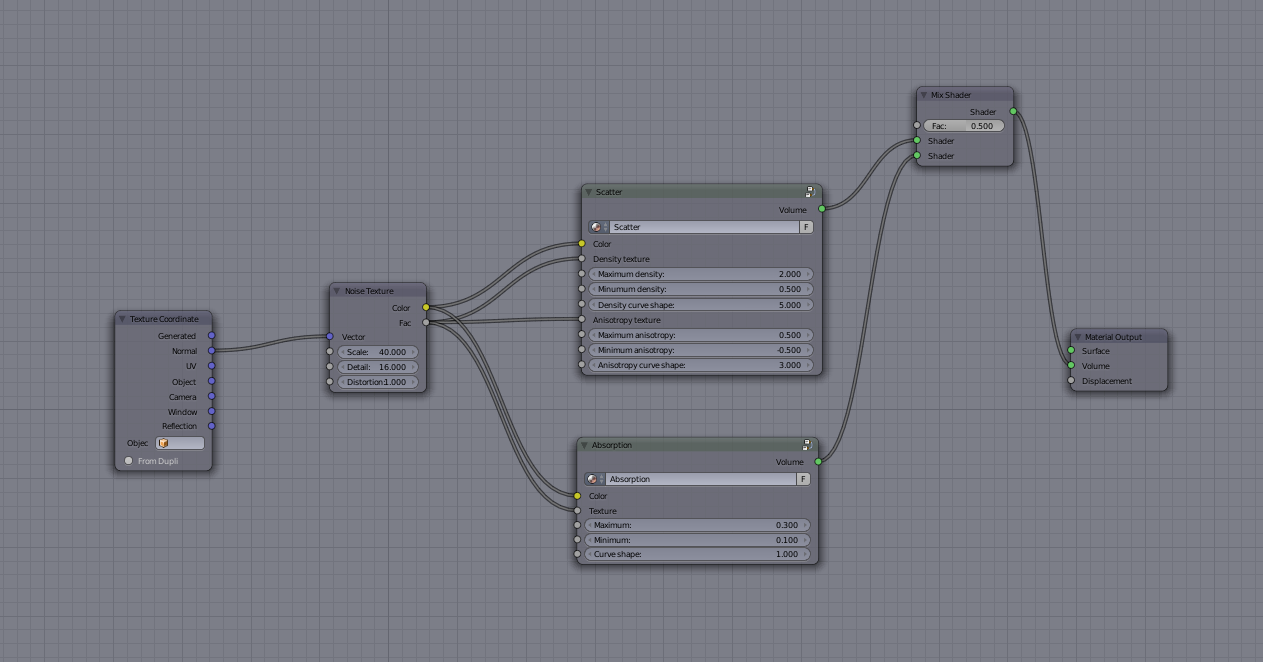 The Color input of both the Scatter and the Absorption node groups are just that, color inputs. You can connect anything that outputs a color to them, ColorRamp, MixRGB, textures, or simply change the color directly, like with any node.
The Density texture and Anisotropy texture inputs of the Scatter node group and the Texture input of the Absorption node group control the density and anisotropy of the scattering and the density of the absorption respectively. You should connect the fac output of a texture, or anything that produces a value between 0 and 1, or you can set it directly.
The Maximum and Minimum inputs control the max and min density and anisotropy of the scattering and the max and min density of the absorption. The density of both go from 0 to the ridiculously high 10000, and the anisotropy of the scattering goes from -1 to 1. You can connect other nodes that produce such values, or you can set them directly.
The Curve shape inputs control how the densities and the anisotropy are distributed. A value of 1 gives a straight line from highest to lowest, a lower value gives more of higher density/anisotropy and a higher value gives more of lower density/anisotropy. They go from 0 to 1000.

Here's the "inside" of the Scattering node group: 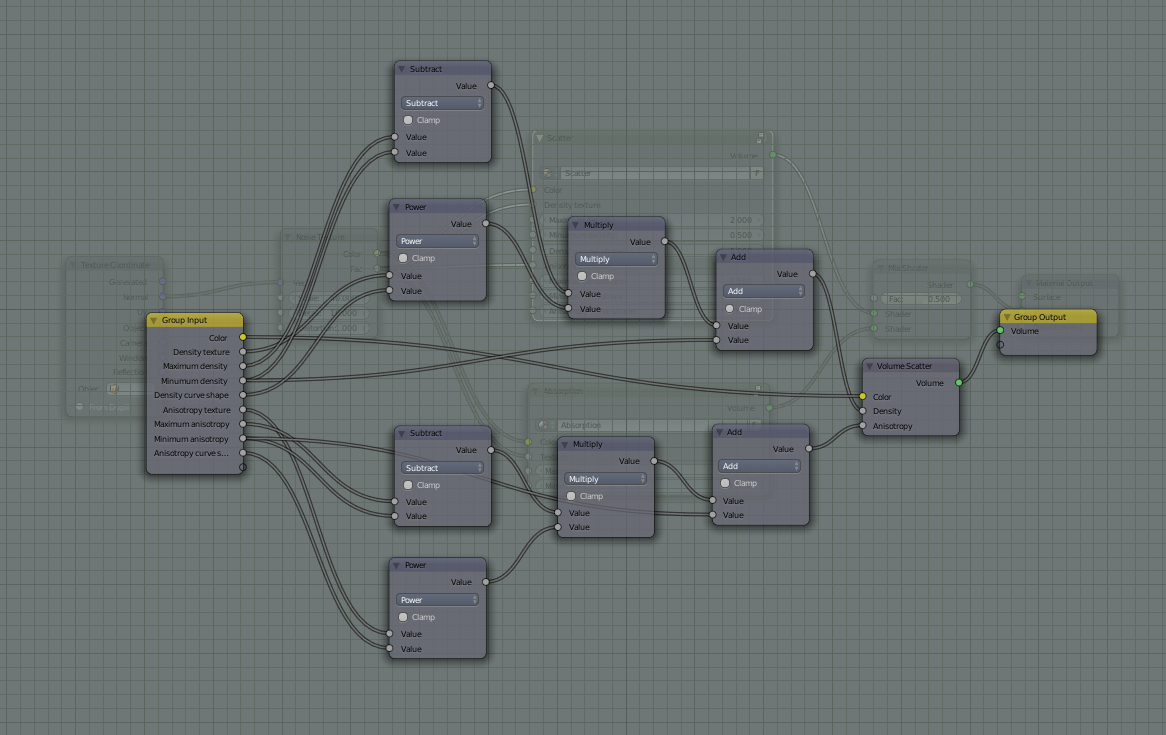 And here's the "inside" of the Absorption node group:

In the setup I show here, I've used only one of each node group, and combined them with a mix shader with a factor of .5. As you can see, I've also used the same noise texture for everything. You may want to combine several of each node group, with different values, and, of course, different textures, and possibly something that gives a little randomness to the fac input of the mix shader(s), or perhaps try using (an) add shader(s) instead.

Here's a little something I put together with the exact setup shown here. It's certainly not a nebula, but like I said, this may be a starting point. It's not a complete solution. 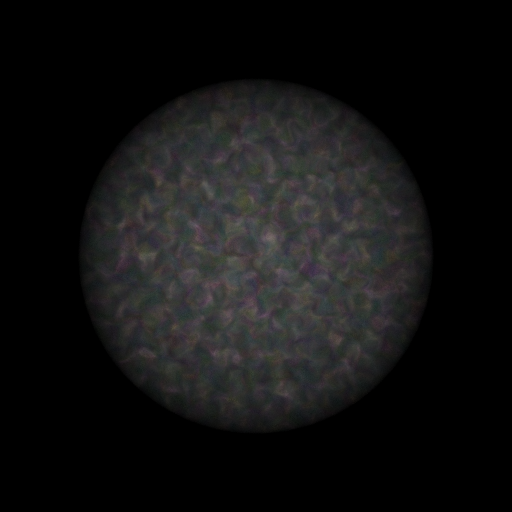 Here's the .blend for this setup:

This way let's you speed up render times a lot! 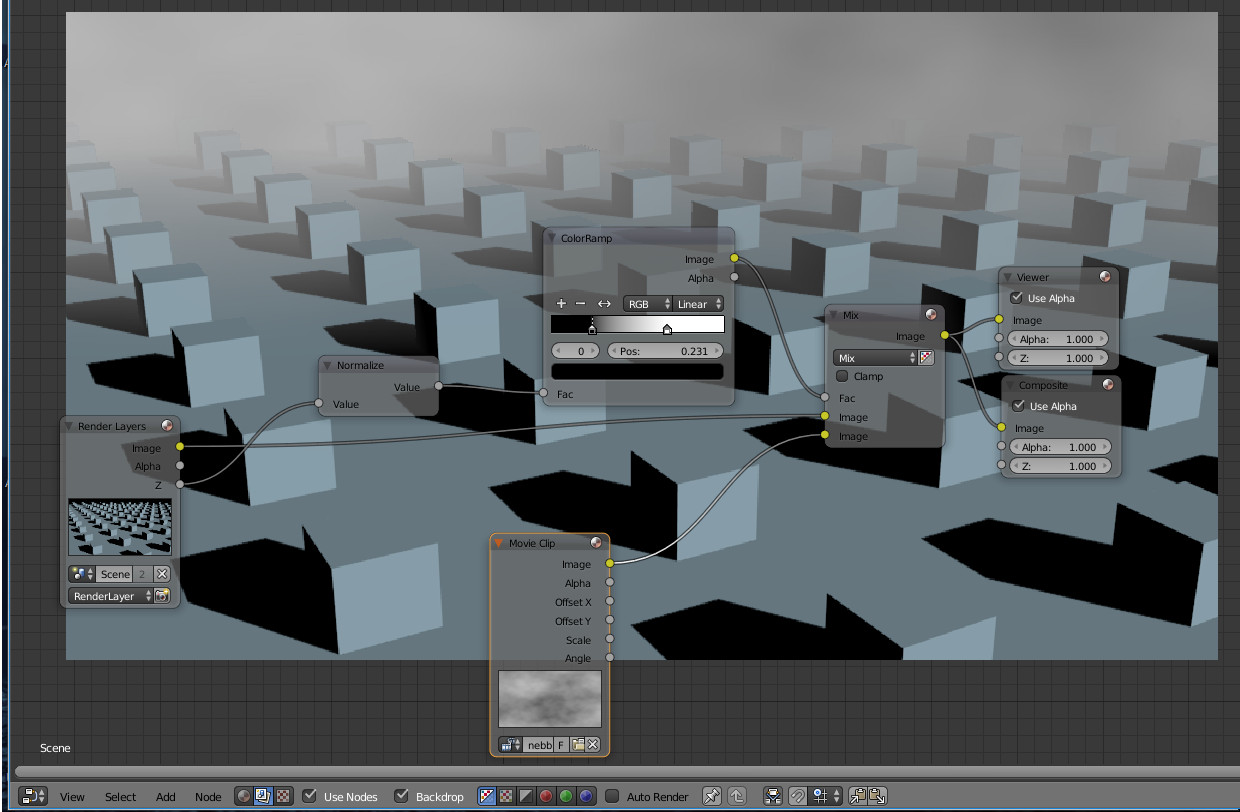 The movie clip has been done by shooting a plane with a clouds texture, animating the texture coordinates during the 1000 frames shot. The color ramp lets you control the amount of the fog: more black equals to more crisp, more white means more fog.

On Blendswap the user viksaz came up with a shader that produces procedual nebulas like this:

12
Abstract Wave with Particle System
7
Mulitple point density clouds - intersecting each other
15
Is there an easy way to make volumetric clouds for Cycles?
3
Best way to create Godzilla's Atomic Breath (Cycles)?
1
Metaballs and particles
3
how do delete individual (dust) emitter particle that passes in front of the camera?