Why should triangle meshes be avoided for character animation?

I've read many times that triangles should be avoided in meshes, too give one reference: "Introducing Character Animation with Blender by Tony Mullen" says that equilateral triangles work fine as long you don't deform them. It seems to be common in game development that the models are triangulated.

Rather than thinking of limitations with using triangles (I think this is an over simplification of the topic), learn common workflows that take advantage of quad-dominant meshes.

However in a specific situation you may find it's not a problem to have a 100% triangle mesh so don't be single minded about this.

Instead of defining triangle meshes as bad, try to learn to use these tools and you'll better understand why in most cases, triangle heavy meshes are not ideal for character animation.

When people refer to character animation, they often don't include robots with rigid surfaces where, apart from the modelling process, tris for flat surfaces aren't that bad. They refer to human faces or otherwise flexible surfaces.

To simplify controlling the mesh for facial expressions or lipsync, faces of characters are modeled more or less low poly to control their features and then a Subsurf Modifier is used to create a high degree of smoothness. That's the point where tris cause all the mentioned problems.

Look at this simple example. The tris to the left give some nasty bumps when subsurfed, the quads to the right are wonderfully smooth. Imagine the difference in a character's face. 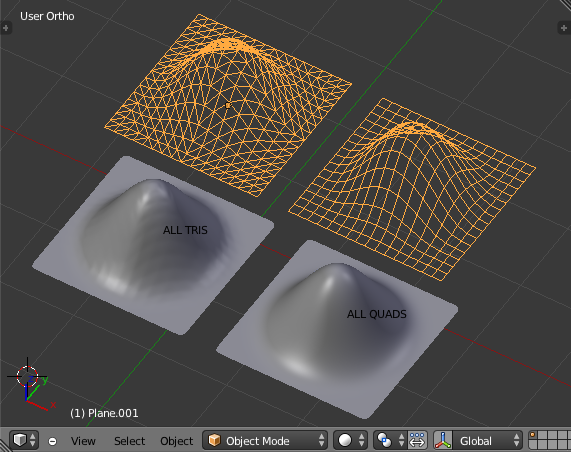 Since Ideasman has a point, here's another example of topology. To the right you have a very clean structure and the desired smooth result. The left shape is not so lucky. Achieving the same amount of smoothness would require a high amount of tris if it's possible at all. 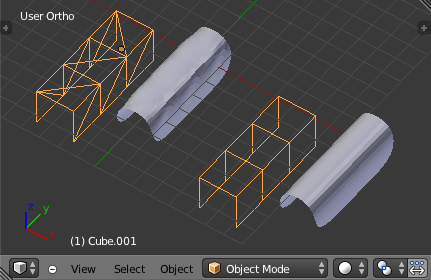 Regarding modelling: Add a UV Sphere and put an edge ring somewhere at the equator with the Loop Cut. That's fast and easy. Then try to put an edge ring around the single vertex at the top. It's harder to add detail if your topology doesn't follow the form.

N-Gons with more than 4 sides and Tris are bad because they do not subdivide smoothly and so break up the flow of edges through a model. Tris are only bad when you need to smooth a mesh ie add subdivisions. This diagram shows the effect of using quads and the subdividing as you see you still have quads after subdivision, so you could do it again for example. 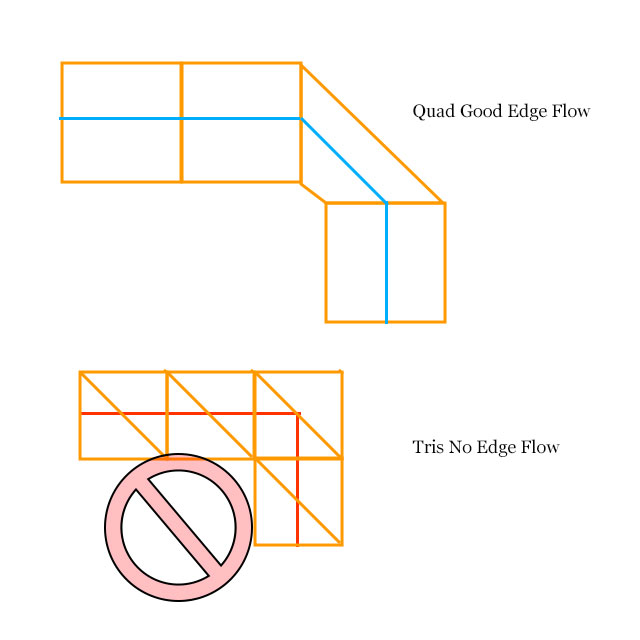 There is nothing wrong with Tris except were you are wanting to smooth and sometimes they can't be avoided, in which case hide them in a unseen part of the mesh, under a arm etc.

Tris are not bad and in fact when the mesh is rendered all polygons are reduced to Tris.

Triangles work fine in lowpoly models (such as for games).

However, when you subdivide them, they dont respond well. You will often see stretching and artifacts. Since subdivision is such a common workflow, it has become a general rule of thumb to avoid triangles.

I will at a later time (if nobody beats me to it) show an example.

It can be ok to use triangles if the surrounding area is completely flat. Or if the triangle is hidden away in inside of something (like an ear).

Pentagons are a little better than triangles (I think, please correct me if I am wrong), but generally avoid them too, if you can. More vertices than 5 are really bad.

I'm relativly new to modeling characters, but what I've found is:

I am not sure about ngons and issues using them in character animation.

0
Are triangles bad for a mesh
0
Is it bad to have triangles in the model?
1
What's the reason to do all-quad modeling?
0
combine triangles with squares
67
When should N-Gons be used, and when shouldn't they?
17
How can Tris be used to an Advantage?
4
When are tris used effectively?
0
how important is it to keep faces to 4 vertices for rendering?
1
Make hole with right topology
0
Are quads or triangles better for games?
See more linked questions

9
Is this face topology good for animation?
0
Are poles a problem for the animation?
0
Should I restart my character mesh?
0
Character Modeling problems- frankensteining meshes and retopo