I know that the Fresnel and Layer Weight nodes do much the same thing, but with one accepting a proper Index of Refraction, and the other a value between 0 and 1. I have always used the Fresnel node as it allowed me to simply look up the proper IOR of any specific material online and plug it in. However, if I wanted to use Layer weight, how would I go about translating an IOR, which I've seen as low as .18 and as high as 2.5, into a value between 0 and 1 to get the same effect out of layer weight? Is there a conversion formula or ratio?

By comparing visual results from both LayerWeight's Fresnel and Fresnel Node on a test sphere I concluded that these settings give similar results: 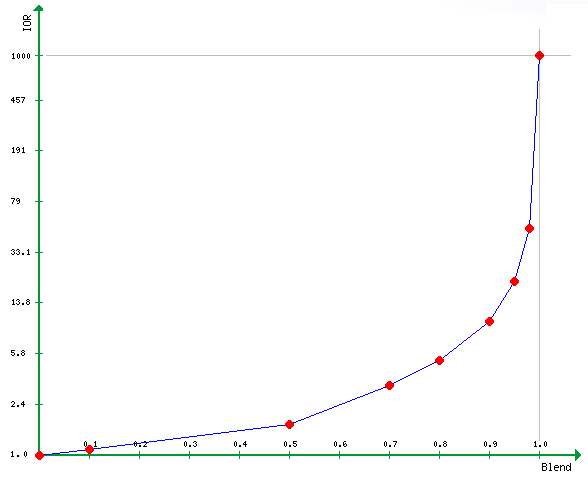 The Y scale is logarithmic

Confirmed by Brecht (thanks) the conversion formula is:

On the other hand the Fresnel node allows for proper IOR input:

I use Fresnel node when dealing with glass-like materials, where the light goes through - where it bends at the interface. I can set proper IOR for the interface this way.

I use Layer Weight node when dealing with reflectivity, it allows for better control over the transition on the surface (how smooth it is) and over how the materials are mixed (with that blend slider). This suits artistic approach better when you are eye-balling stuff.

Not the answer you're looking for? Browse other questions tagged cycles-render-engine node-editor shaders or ask your own question.

1
Normalize mix shader fac to .75 as midpoint instead of .5
2
What's the relation between Cycles' sampling pattern and the pixel filter?
26
How to understand the math behind Andrew Price's embedding his beer within his glass
30
Physical iridescence in Cycles?
4
Can't find IOR and Density value nodes
8
how to recreate microscopic diatom glass material
9
What circumstances or material types should have a different specular value in a PBR workflow?
3
Change node links based on which Render Layer is rendering
0
Is Principled BSDF suitable for metals in terms of Fresnel?