I'm looking at an export script and I see where it extracts the various 3d properties from an object named "me" like these 3 lines:

Which it goes on to format and write to a file. Where can I find a list of all the things I can access like this? I found the python API but I haven't found this specifically.

in the console for instance

if you type obj. and hit ctrl+space you'll see all the attributes of the object at that level. This list is long, and you can scroll the sidebar 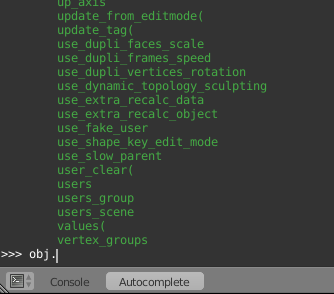 As you state me = obj.data, the me named variable is just a convention, it could be called whatever, but it's handy to stick to the convention. 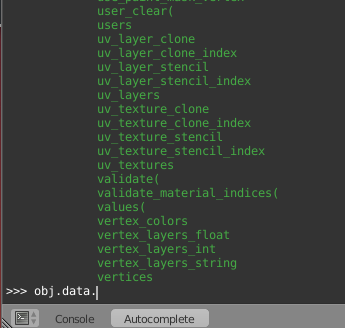 Note that the ctrl+space feature will show all attributes starting with the letter v if you do obj.data.v<ctrl+space> like this:

This becomes useful once you get a mental picture of the API, it can speed up navigation big time.

Not the answer you're looking for? Browse other questions tagged python documentation or ask your own question.

5
Is there a simple/concise explanation out there of script manipulation of mesh objects?
3
Access operator's property with python
3
Books or web resources for blender-python (bpy)
0
bpy text attributes: how to set, how to discover

1
How to avoid permutations of vector objects when dumping data?
5
Does Blender API have any evaluation function for Bezier curves?
6
Is there a non-blender API for producing blend files?
3
how to specify active window for a series of screen captures in python
2
How to know if RNA property was created at runtime
0
How to write a script that executes a list of commands only if a specific object is already inside the scene: Easy question I think!
3
How to export Bone Weights?