I remember reading (I can't remember where though), that the Blender Internal render engine had become difficult to maintain and is not based on a modern architecture (hence - Cycles was created).

My question then is this:

I have grown somewhat fond of the internal renderer (because I'm accustomed to it and setting up scenes for it), and wish it could be more modern, but I know things might have to change.

Yes, for the upcoming Blender 2.8 release, Blender Internal has finally been superseded by Cycles. 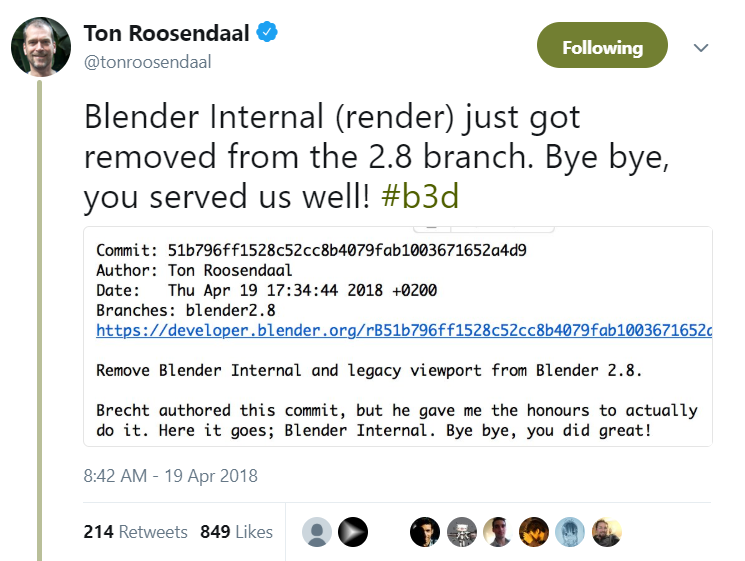 As far as I know, It is not yet officially confirmed. I asked a developer on IRC and he said No. However, one of the other developers has this on his blog.

The goal of Cycles is to probably replace the Internal Render Engine in 1-2 years and have a fast and modern Render/Shading system which can be used for production rendering and for animation as well.

from code.blender.. the main developer also hints with..

There may of course be developers that want to continue developing Blender Internal, and the intention is not to drop it immediately.

Cycles will eventually replace the internal rendering engine, becoming the standard that every Blender user will soon use. The sooner you can jump aboard, the better.

It seems such a decision was made a long time ago too.

@andrewpprice There has been no further development for the BI (for about 2 years now) apart from critical crash fixes. That won't change.

It is all inconsistent information here and there but all very credible sources, so a definitive answer for this would be, It has not yet been confirmed.

Blender is really made by and for users. Removing any feature from the program won't be done without a good long public debate (and good reasons).

Our blender.org project works with the "Module Owner" principle, developers who are responsible for maintaining and work on areas in Blender.

If you want to know who can give a reliable answer for the future or plans on specific development topics, check on the Module Owner list here: http://wiki.blender.org/index.php/Template:ModulesOwners

Or check with one of the Blender project admins, such as Campbell Barton, Brecht van Lommel or me :)

There is no plan to drop Blender Internal at the moment.

It got some new development recently with Freestyle support and 3D viewport rendering so that definitely would not be thrown away soon. How much further development it will receive is unclear, but as long as there are enough users it is unlikely to be removed.

Not the answer you're looking for? Browse other questions tagged cycles-render-engine rendering blender-internal-render-engine or ask your own question.