Mirror modifier can not be used in edit mode

I am using a technique I found on YouTube titled "Blender 2.59 Boat Hull Modeling Tutorial with converted B-Spline Guides". Here is the link I used: https://www.youtube.com/watch?v=ij6RicPUoaA&feature=iv&src_vid=aWoB5x6VPkc&annotation_id=annotation_370854

I have followed along with it and made those B-Splines as best I could using the orthographic views I made of the model using Inventor. So far everything worked except for applying a mirror modifier to the plane as described at time 23:53/42:28 in the tutorial.

I understand that the narrator is using release 2.59 and we are using 2.72, so the problem may be a version issue but I'd appreciate some advice as to how to continue.

You can see in this image that the narrator is applying a mirror modifier while the plane he has created is in the edit mode. 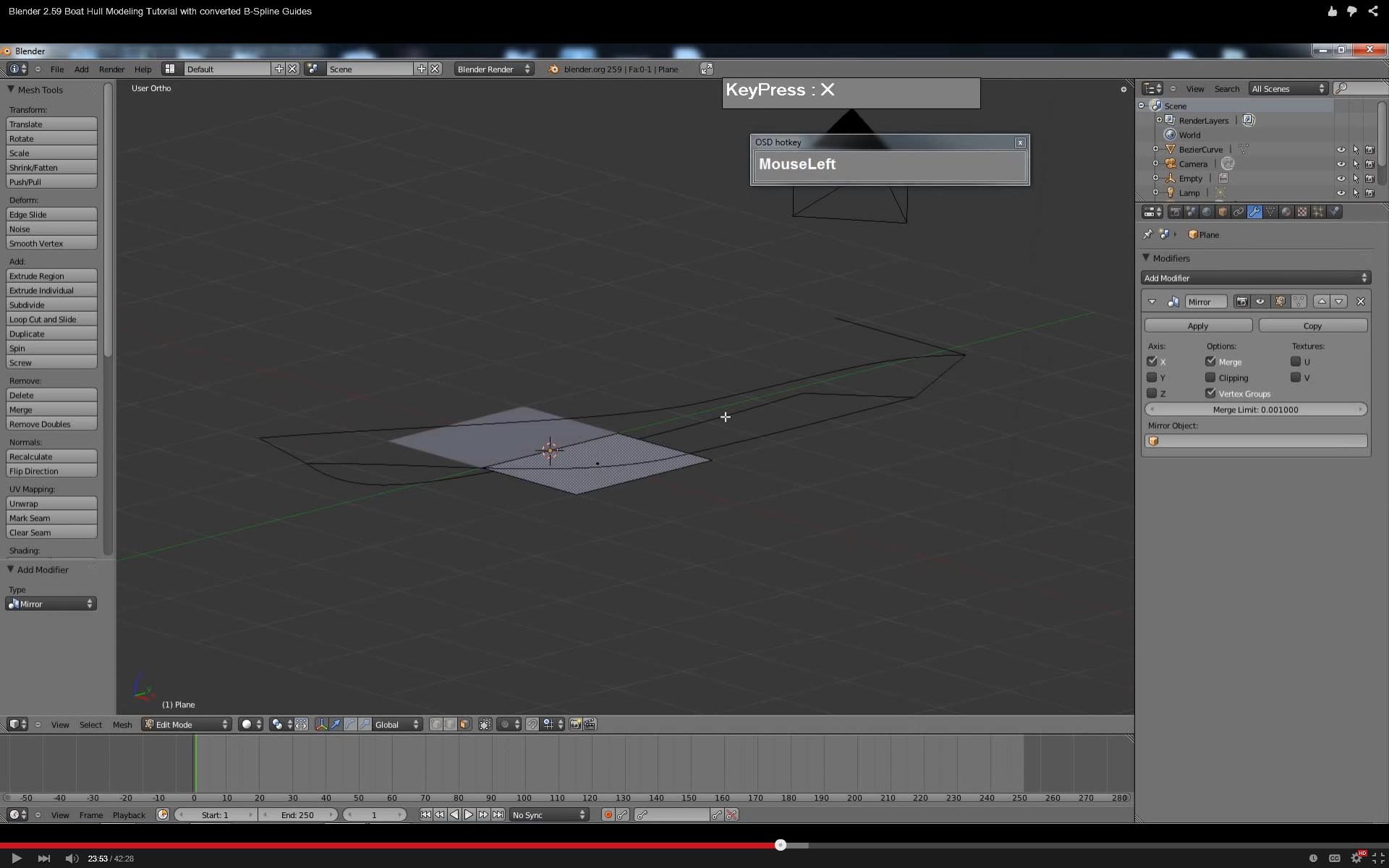 When I try to do that I get the message "Modifiers cannot be applied in edit mode". My question is, "How can I continue modeling the hull as shown in the tutorial if I can't use the mirror modifier?"

The person who made the video is simply saying 'apply' instead of 'add'. They do not 'apply' a mirror modifier, they just 'add' one. At no point, at least around the time you mentioned, do they actually press the 'apply' button on the modifier.

If you were to apply the mirror modifier you would no longer have a mirroring effect on edits you make to the object. You only get mirroring for as long as the modifier is added to the object and not applied. When you are finished you can press 'apply' and the mirrored side of the mesh will now be editable like any other piece of geometry. Seeing as at that time in the video he hadn't made much geometry it wouldn't have made sense to apply it.

So, to summarise, to use the mirror modifier you just have to add it to the object by choosing it from the list of modifiers.

7
How can I fix the non-stitched seam that is present after applying mirror modifier?
1
Mirror Modifier is visible in object mode but disappears in edit mode
2
Remove ridges from hemisphere in half circle ngon that appear with the Subdivision surface modifier
0
Duplification preview with mirror modifier and subdivision surfaces
0
Adding Bend Modifier for a parent object and treating as if it's a single object
0
Is it possible to make a mesh symmetrical without mirror modifier?
2
Are weird shading artifacts normal with the subdivision modifier in edit mode?