When modelling / rendering a glass with liquid inside (in Cycles), which direction do the normals for the glass only surfaces, shared glass-liquid surfaces, and liquid only surfaces point? I have looked into this myself but seem to get conflicting answers from different sources. See here for an example.

Also, should each of the surface types mentioned above need a separate material / IOR?

Autodesk has information about these here, but I'm not sure it applies for Cycles / path tracing: Autodesk, normals and IOR for glass-liquid interfaces

Note that Blender SE has some related questions:
How to illuminate the darkness inside glass objects in Cycles?

The answer seems to be yes. This is a fairly commonly used technique, it works with LuxRender and Yafaray as well.

Here is an example rendered in cycles with the normals and materials setup like the autodesk example:

It is evident that in the most common case of an interface with air, the IOR to use is the IOR of the media (since the IOR of air is 1.0), whereas in an interface between two different media, the situation is different. 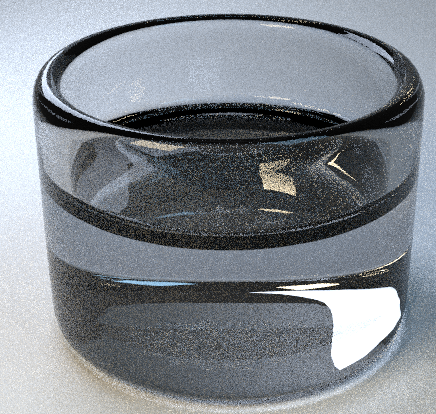 It seems that the basic thing to keep in mind is that the interface IOR should be equal to:

If you set up the normals the other way around, (e.g. here) it is the opposite:

In the autodesk example, Liquid (with an IOR of 1.33) is divided by Glass (IOR of 1.5), because the normals are facing the Glass medium. 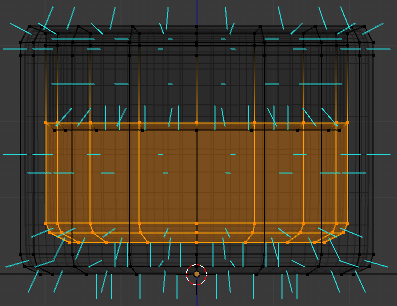 Yes, you do need to use separate materials and IOR values for each surface type. Assign the materials to the appropriate faces:

Not the answer you're looking for? Browse other questions tagged rendering cycles-render-engine normals or ask your own question.

50
How to illuminate the darkness inside glass objects in Cycles?
24
fluid in a glass
10
How should a glass material be setup in Cycles?
11
Is it possible to simulate an optical fiber with cycles?
26
How to understand the math behind Andrew Price's embedding his beer within his glass
10
Is it Possible to Dynamically Change Object Materals?
4
What are alternative methods to Fluid for making a glass appear to be full of liquid?
3
How to make liquid's color intensity less, where the geometry is thinner?
2
Help with putting liquid in glass in blender
2
Why is the liquid's reflection look so weird after the render? (Blender Guru tutorial)
See more linked questions

50
How to illuminate the darkness inside glass objects in Cycles?
2
Strange seams while rendering glass object
26
How to understand the math behind Andrew Price's embedding his beer within his glass
5
Glass Volume Material with Caustics and Colored Shadow
0
Cycles spotlight creates fireflies on glass and glossy materials
1
Glass refractions in Eevee vs Cycles
1
Strange liquid appearance inside glass
0
My pocket watch is not visible through it's glass except