How can I reflect a transparent background?

I'd like to make a glossy surface which reflects objects above it, but that also reflects a transparent background in the final render.

So in effect, the final render would contain only the reflections, not the surface itself.

Is this possible please?

You need to use a Transparent shader, and a Glossy BSDF shader, combined with an Add Shader, not a mix shader. 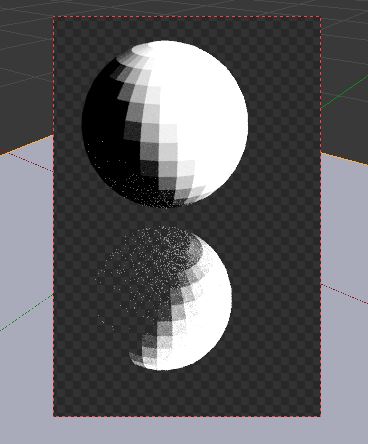 Although you should normally use a Mix shader (greater realism) this is a perfect use case.

Here is a comparison of the two methods:

This solution does not require compositing, and is actually very simple. Think of the ground plane as being a plate of glass instead of an invisible mirror, transparent, yet glossy. So we will use a glass shader and not a glossy mixed with a transparent node.

Plug a Light path node into the IOR socket of the glass node to start with. The light path reference comes from a forum discussion I saw on BlenderArtists (unfortunately, I don't have the link presently, I'll add it if I come across it again). Add a transparent shader, then plug the glass shader into the top input of a mix node, and the transparent into the bottom input. Run this out to the output, render, and invisible, reflective surface! 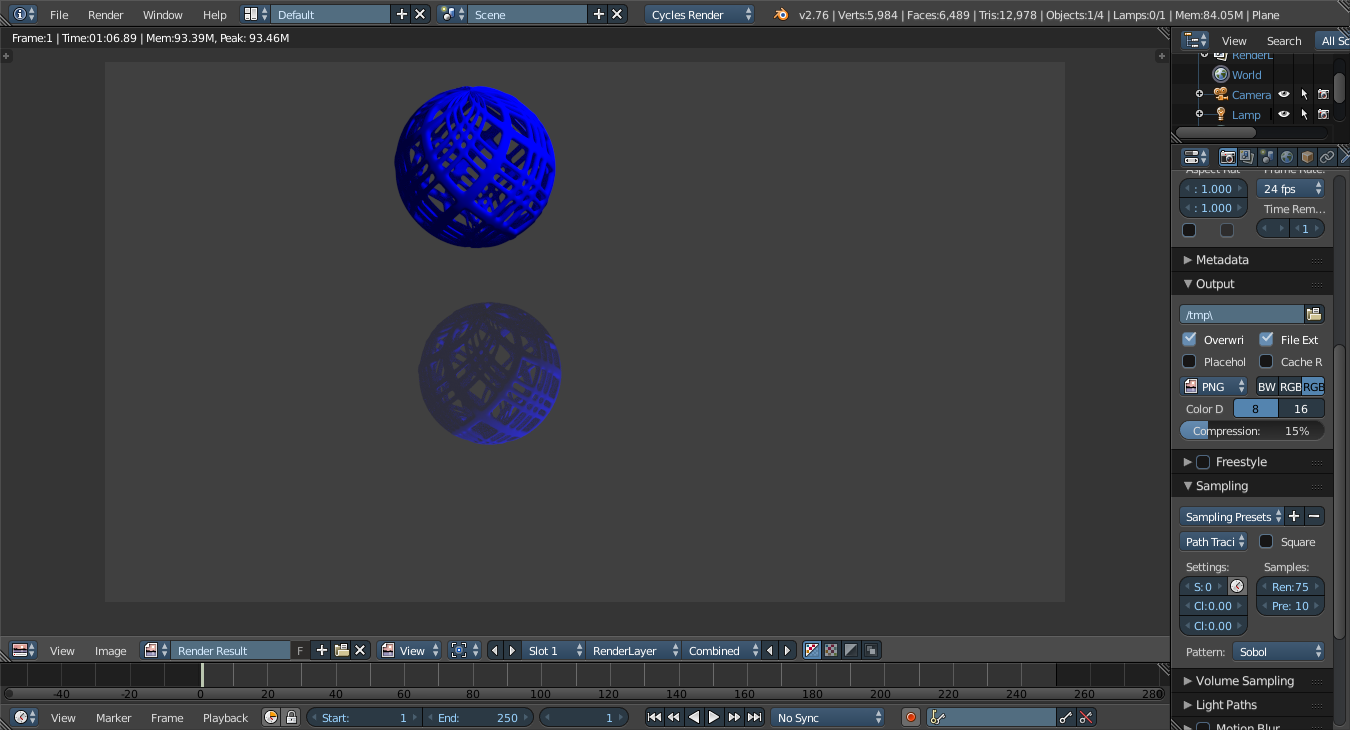 You can achieve this relatively straightforwardly using render layers and the compositor. Here's the result I was able to get. It looks much better over a black or grey background than white. 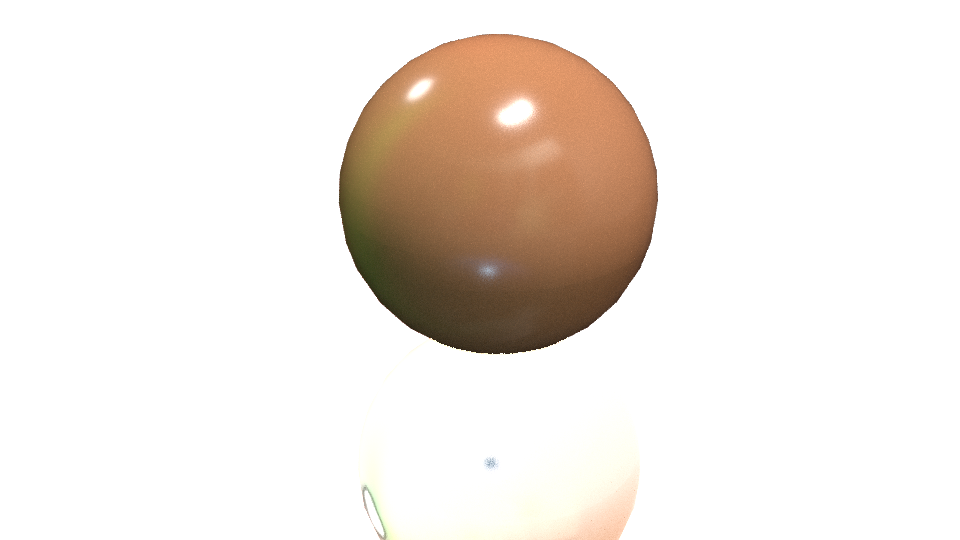 With lots of simplification to the node setup it's easy to mask out just the reflection. 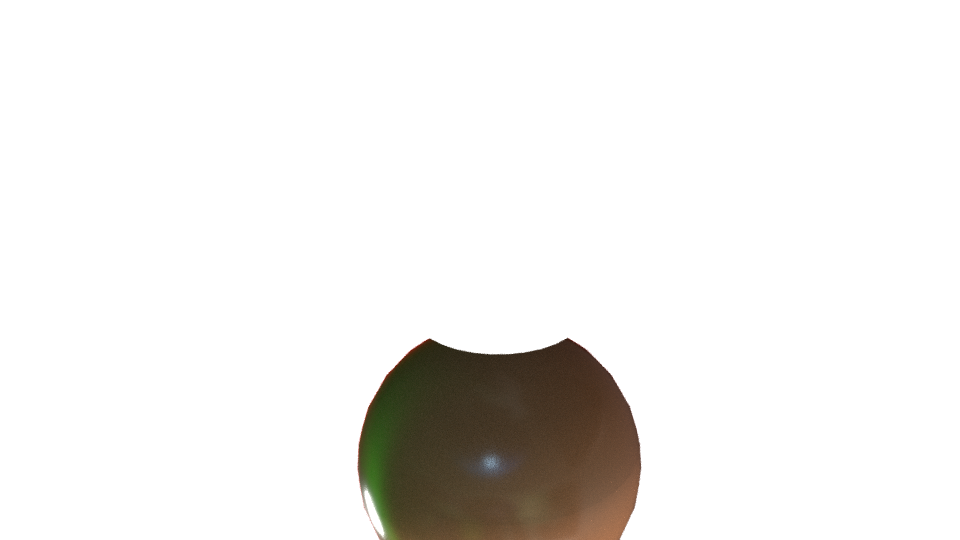 Set up two layers in your scene. The first layer will be your main render, and the second layer will be used to mask out the reflections. Make instanced duplicates of all of the scene objects (Alt+D) and move these duplicates to the second layer. Keeping all of the duplicates selected, change the material properties to be linked to object instead of to data and copy that setting to the other selected scene objects using the context menu. Add a new material to the active duplicate and set it up to be Emission, white, strength 1. Link this material to the other scene objects (Ctrl+L, Materials) so that they're all emissive. At this point the first layer should look something like this: 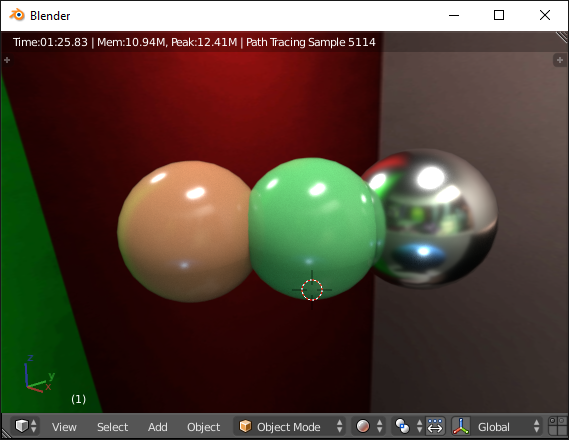 And your second layer should look something like this: 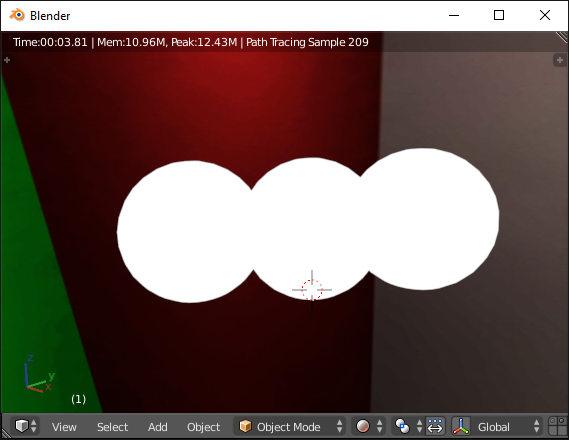 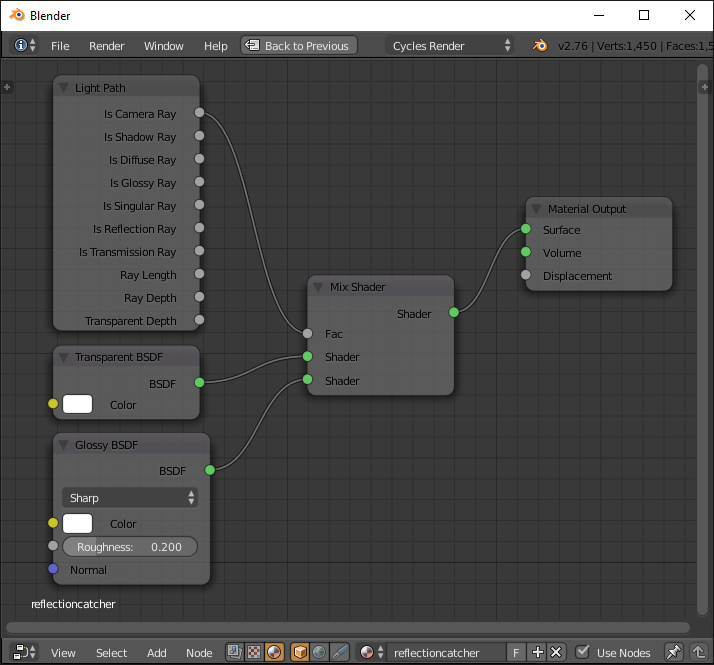 It's set up to show a glossy surface to the camera and to be invisible otherwise. This prevents it from affecting the rest of the scene's rendering. Of course, if you want some other behavior, you should feel free to make it happen.

Now that the scene is set up, it's time to set up the render layers. There are two, one for each layer in the scene. 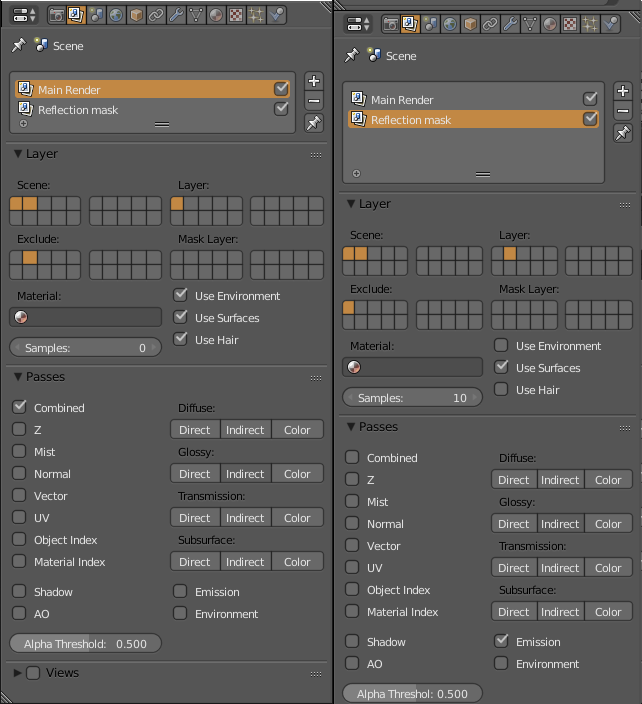 The first layer is set up to be a beauty render. It excludes the second layer and uses the environment IBL to get a good final render. I've enabled the glossy indirect pass as well, although I suspect it might not be necessary for your use case.

In the composite, you can get the mask for the scene with the Emit output of the reflection mask layer. 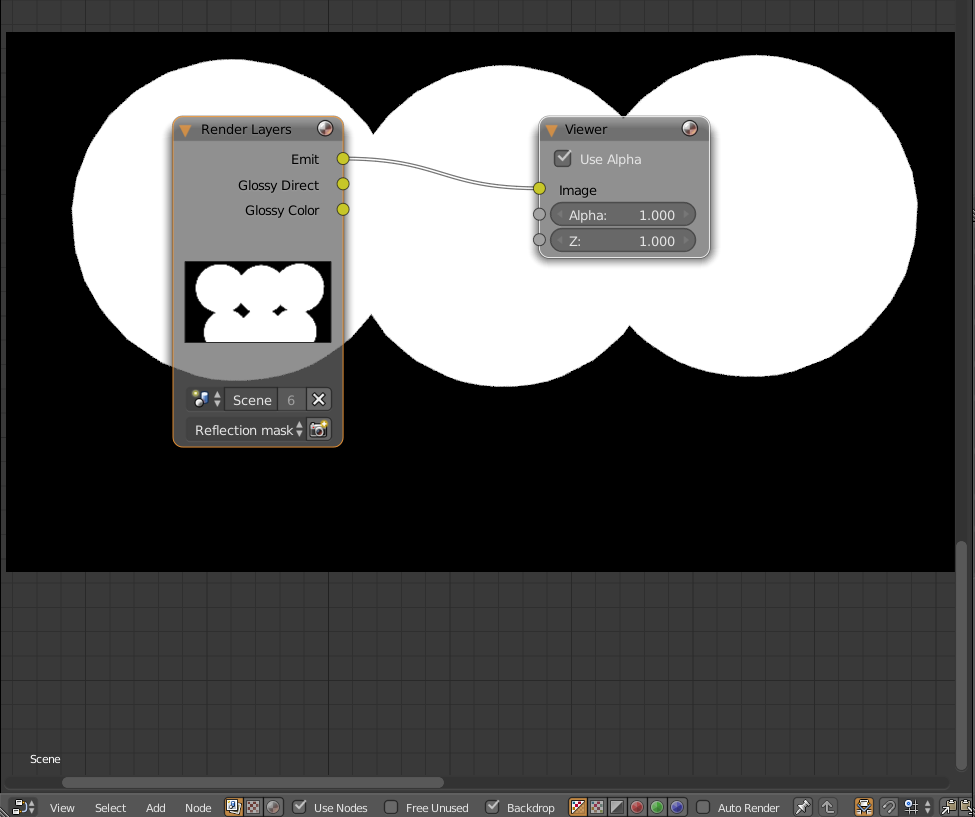 You can get the mask for the reflection by multiplying glossy direct contribution by glossy color. Just glossy direct is close, but isn't antialiased in some areas. 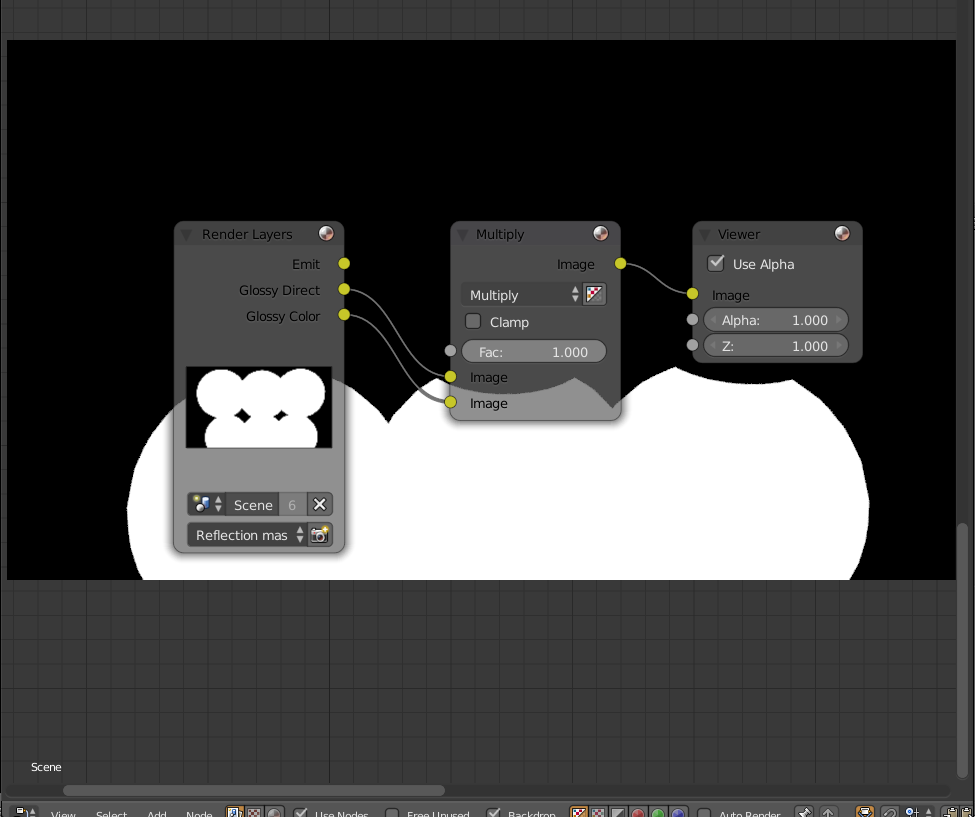 You can get a mask of the scene and the reflection together by enabling and using the combined pass for the mask layer.

From here you can use that mask to get an image of just the reflection: 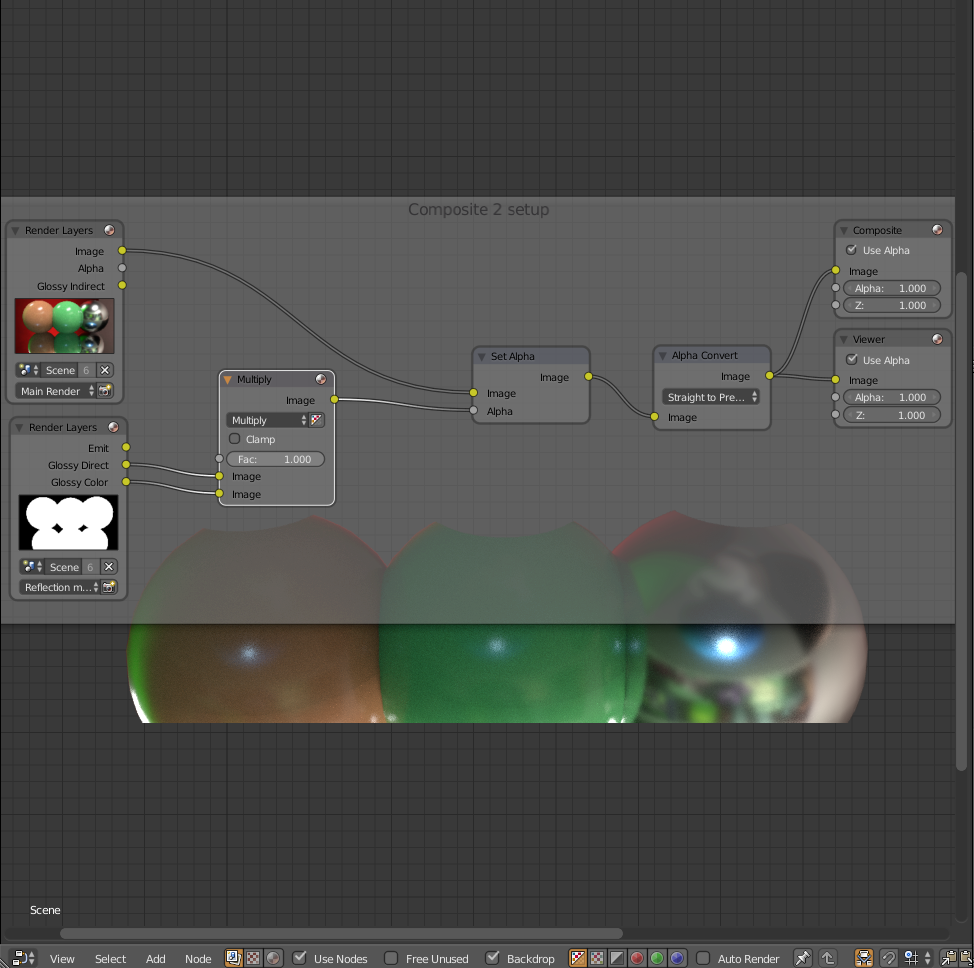 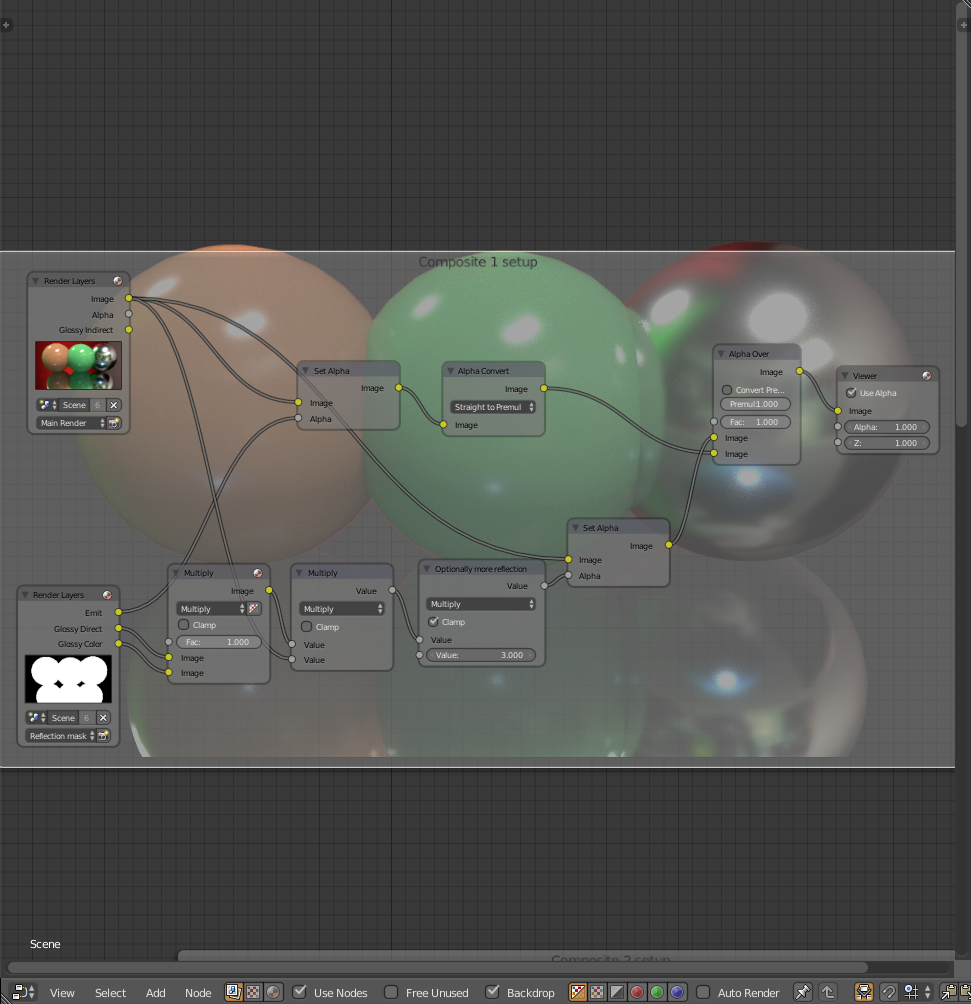 The setup also works pretty robustly with curved reflecting surfaces. Here's a monkey, which I used the glossy indirect pass to get the color of since I didn't want the direct specular highlights it was picking up. 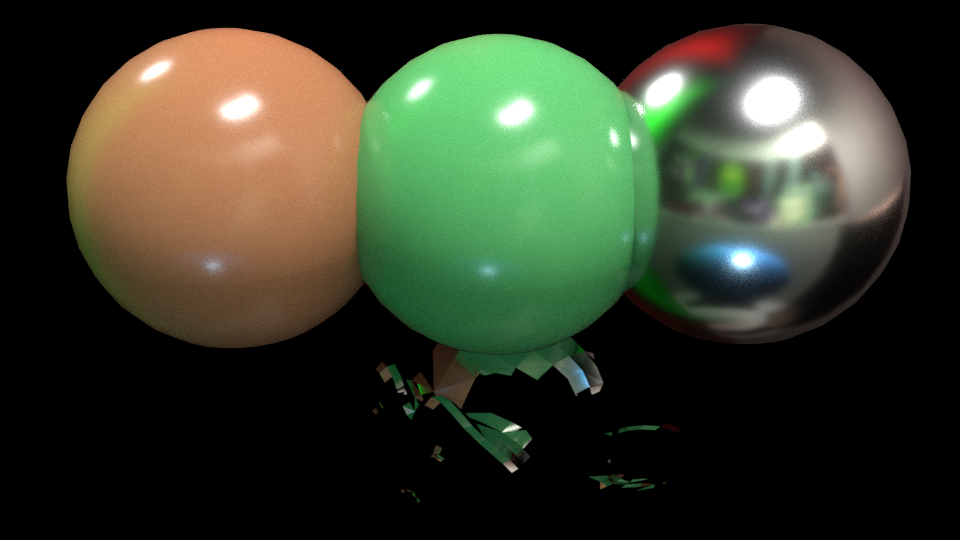 I am sorry, but the only "correct" solution is to render a custom mask as a secondary render to your scene like this:

Where you give all the objects a white emission shader, the ground a sharp glossy shader and you uncheck the environment from render-layers.

For this to work in one render layer the ground shader would have to react whether the ray reflects environment or reflects an object. Which it cannot, because for the light-path node all the ground plane is one ray type, has same transparency depth and same ray-length.

For multi-layer solution utilizing the same objects you would have to overwrite their material with a white emission material in the second render layers and you would have to have a choice to exclude the ground plane from the overriding. Which is sadly not possible.

Multi-layer solution that would work needs copies of objects with a different material (white emission) on separate scene layer which is same like a dupli-scene for the mask or a second render for the mask.

So the only option is to use a compositor and key the reflection objects with some color-key. Which put's a restriction on those objects to not have that color.