Im trying to solve a certain problem. i've tried several different approaches, but since i have not found any solution yet, i'm asking you guys.

I don't want to keyframe the whole process because i have several rotating object, but they all rotate in different speeds and offsets. I want to be able to change the speed in which object 1 is turning without having to manually adjust object 2. So i would like to use drivers for this task. But i have no idea of scripted expressions being any more complicated than e.g. var*.5 etc. Can somebody show me a way (scripted expression) which delivers an output of 1 for the duration of a 90° rotation and 0 for the remaining 270°? Or even an other approach. 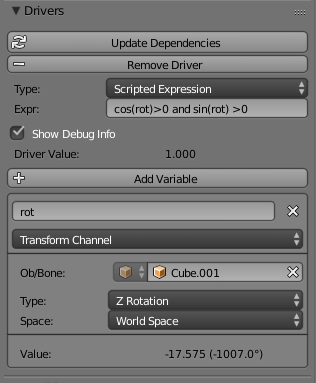 Note: the angle is in radian

7
Drive Objects Rotation depending on state of other objects sin and cos value
2
Can I drive multiple drivers with a Vector from one procedure call?
3
Set driver variable ID-block using python
1
How to set driver distance max and min influence?
3
Rotation Value ist not the same as given in the driver output
1
Offset on driver via scripted expression
0
Wheel Rotation Driver