Align both ends of a bone to a curve without stretching?

I'm trying to rig a series of bones that follow a curve and stay an equal distance from eachother and have strings that stretch between each segment. The thing that makes this a little complicated is that I only want certain parts to stretch to the curve length, not the whole mesh. The model provided is just a shareable "demo" version of the model I'm rigging. My goal is to make a mechanical arm that functions similarly to the beast cutter from Bloodborne, but much simpler and with exactly 4 segments. I need the resting pose for these segments to be in a "locked" position, like in the video. The gif below is what I got so far. 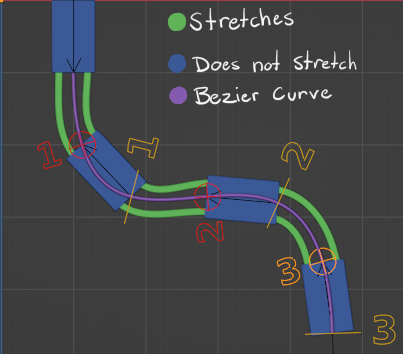 Each "segment" bone has a copy location constraint set to an "anchor" bone, as well as a damped track constraint that points towards a "pointer" bone. Both the anchor/pointer bones have a follow path constraint with fixed position turned on. The offset factor for the anchor bones are in increments of 0.333 while the pointer bones are set to a lower relative value for the damped track. 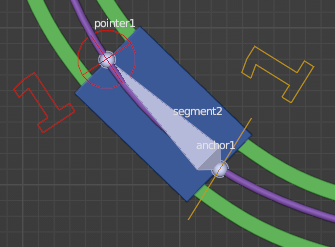 When the arm is near its resting pose, it looks great, exactly what I want. But when it's extended, the segments diverge and it no longer follows the curve due to a greater distance between the pointer bone and the segment bone.

Then I need to readjust the offset factor for each pointer bone so that the damped track points the segments along the curve again, then it's back to normal.

But then bringing it back to a bunched up pose causes the bones to work more like the "follow curve" option in the follow path constraint, which is what I don't want because it causes a jagged shape. 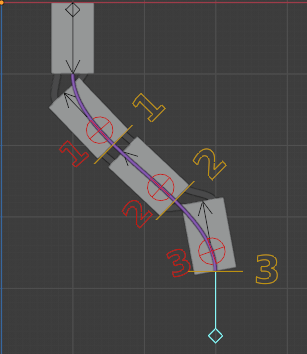 Is there a way to make the pointer bone automatically adjust its offset factor to stay at a fixed distance from the segment bone, depending on curve length?

I thought perhaps this could be possible with some driver magic if I were able to use a curve's length as a driver variable. While blender doesn't seem to have a reliable way of doing this, I found a janky workaround here that makes it possible. Unfortunately, I don't know how I could plug this value into a driver to get it to work, or if even having the curve's length is enough to accomplish this.

Below is an illustration of why I don't want to use the "follow curve" option in the follow path constraint. I'd rather the bones point "in the general direction" of the curve, illustrated in the third example. 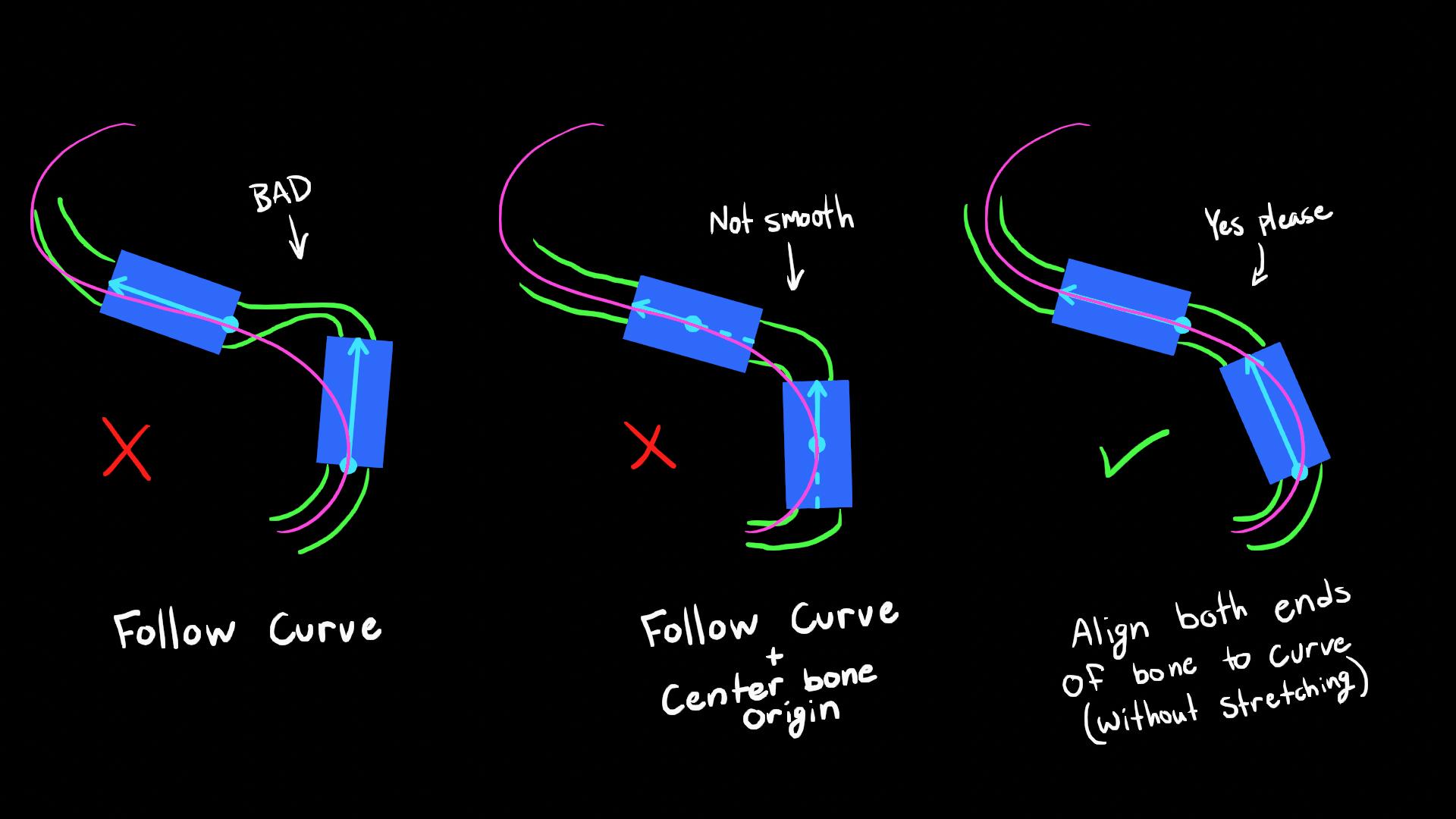 Here's a GN Group that will modify a given Bezier curve to a set of smooth, stretchy double-cables linking fixed-size blocks at equal intervals along it. The Curve can be animated, for example, using Hooks. This example has 3 hooks on the curve's 3 control points.

That's a subgroup in a tree which furthermore:

Given a curve, the modifier allows you to set

Have a look, see if it works for you:

I think I may have figured it out. I'm gonna put this out in case there's ANYONE who also wants to do this. I might also change the title to something more search term friendly.

I was thinking about this as I was trying to sleep and how I would go about using the janky workaround method to get a driver equation that could solve this problem and had a bit of a light bulb moment. I jumped out of bed and tried it out. It's 1:30am.

So in the video, it shows someone using the array modifier set to "fit curve" on a plane that's scaled down by A LOT (the smaller the plane, the more accurate the measurement). The plane's dimensions will then display the length of the curve in whatever axis was chosen. 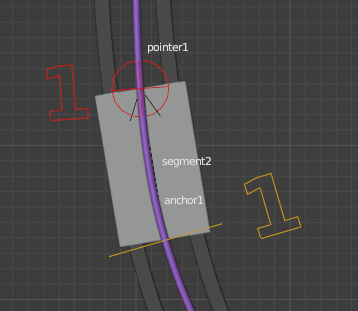 I took the pointer1 bone and added a driver to its offset factor and put this in: 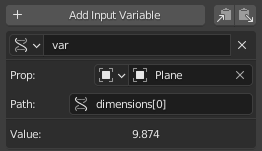 I used the plane generating the curve length as the object, and If I'm not mistaken, 0 = x axis, 1 = y axis, 2 = z axis. In my case it's the x axis. The value should now be displaying the length of the curve in meters.

Now before, this is where I got stumped and gave up cause I couldn't figure out the math to use in the scripted expression but I think I got it now.

I put 1/var as the expression and that made the pointer bone stay at a FIXED point exactly 1 meter into the curve, no matter how long/short it got. Then I tried to take it further and experimented with different numbers and operators and came up with a formula:

y = the offset you want in meters (in this case, the length of the segment bone)

The anchor1 bone is set to an offset factor of 0.333. I want the pointer1 bone to stay at a distance equal to the length of the segment2 bone, which is 1. So I put this in the expression box:

It works! The pointer bones (red) stay at a fixed distance from the anchor bones (orange), all while staying aligned with the curve!

The ONLY problem I've noticed with this has is that since I scaled my plane down to 0.001 of a meter, the plane will now generate 1,000 vertices per 1 meter of curve length, which could cause some bloat if your curve is several hundred meters long or something.

2
Actual speed of object on curve
2
How can I rig telescopic parts to move one at a time?
0
Bendy bone ends don't follow rig, also 'stretch to' issues
1
Actual Constant Offset for "Follow Path" Constraint
1
Generate Curve from Motion Path of a Bone (to animate steering of a fork lift)
1
Spline IK with control of both ends