What type of Euler angles is used in Blender?

There are several possibilities for representing a rotation, e.g. direction + angle, which is the most visual but requires two distinct objects, and matrix or quaternion, which are preferred for computation but not visual at all.

Blender uses the previous methods and also an Euler angle representation, similar to a gimbal system. Any transform in a 3D space, excluding pure translations, can be expressed by three angles representing a chain of three rotations around three different axes in a specific order.

There is an infinity of choices for the axes. Usually axes are part of a Cartesian frame XYZ, and either fixed (extrinsic) or rotated (intrinsic). Proper Euler angles use a chain with the same axis for the first and third rotation, Tait-Bryan angles use different axes for the three rotations, but are also often referred to as Euler angles. One commonly used possibility is:

The red axes initially aligned with XYZ have been rotated by φ about Z, then by Φ about ξ, the older X axis now rotated, and finally by Ψ about ζ, the old Z. This Euler mode would be referred to as ZX'Z'' to give a meaning to the triplet (φ, Φ, Ψ).

In Blender these three angles can be grouped into a Vector of floats when a single object is preferred to represent the rotation. Still the angles mean nothing unless we know the chain of axes used (mode).

What the documentation says

From the Advanced section:

The special thing about this is that the axes have a hierarchical relationship between them: one of the axes is at the top of the hierarchy, and has one of the other two axes as its immediate child; at the same time, this child axis is the parent of the remaining axis, the one at the very bottom of the hierarchy.

Which axis is on top, which one in the middle and which at the bottom, depends on the particular Euler gimbal: there are six types of them, as there are six possible combinations: XYZ, XZY, YXZ, YZX, ZXY and ZYX Euler rotation modes. These modes are named using the letters of the axes in order, starting from the axis at the bottom of the hierarchy, and finishing with the one on top.

It doesn't indicate which mode is used.

I setup an experiment to try understand which mode Blender uses:

It's just three Cartesian systems, a fixed set of XYZ axes, one set with darker colors randomly oriented using a Transform node and used as a target. One last in lighter colors can be oriented manually using a Rotate Euler (Euler + Object options) connected to a Transform.

I'm able to match the darker system by orienting the mobile system. When matching, the Euler angle values match. But I still have trouble understanding the axes used.

When manipulating the Y input of Rotate Euler, and looking along the world Y axis:

It can be seen that the size of the rotated light green axis changes during the rotation, which indicates the rotation is not about the world Y axis. I tried other possibilities but I was not able to determine which axis is associated with the Y input.

What are the axes and the axis order used in Euler defined rotation?

In the viewport, you can select the order of Euler component rotations: 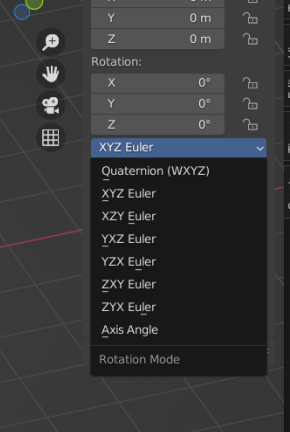 But in GN, you are not offered the choice. It's XYZ.

Unless you're offered a 'Local' option for entities with their own axes, such as instances (or rotations, which you can think of as axes themselves), transforms in GN are of the geometry, in its object's space, as previously transformed at object-level. (Just like other modifiers.) So rotations are about the modified object's axes.

Euler rotations are compounded; as in a physical gimbal, each axis becomes the child of the axis before it. Chaining single-axis Eulers in another order does not work. The axes revert to the object's, after a rotation is executed.

If you want to assemble your own compound Euler rotation in GN, setting the axis order, you can do this... 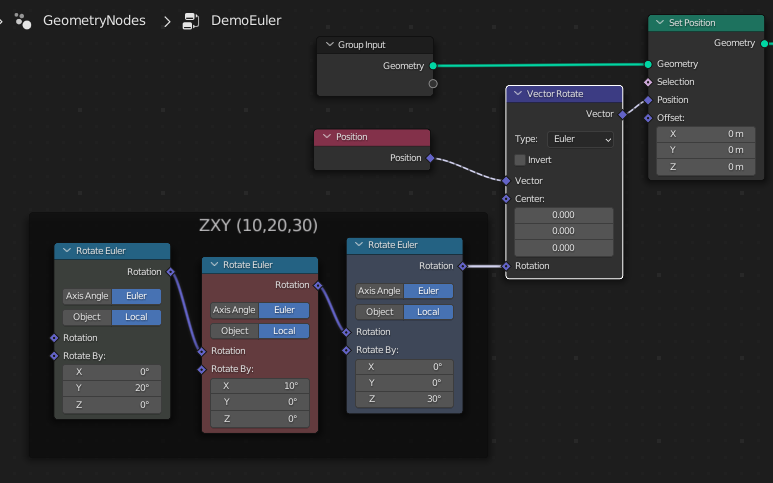 Note the rotations are 'Local', and read backwards from their effect.

As far as I can tell from the source code, Rotate Euler is simply multiplying two matrices after translating the Euler rotations into them.

The translation from Euler rotation to matrix is as follows:

The axis order for Euler rotations can be set. Click the drop down list Mode in the Transform tab in Object Properties. 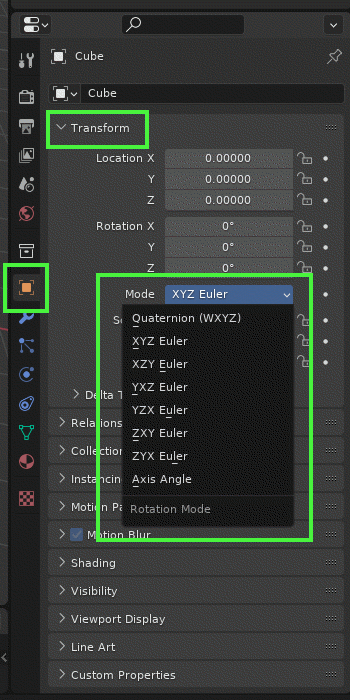 I did some testing on this, by setting the Euler rotation from python on one cube and then on another cube I rotated manually (using R followed by angle) on the global axes in the same order as I did in python, and the two cubes lined up. My conclusion is that the axis order refers to the global axes, i.e. Tait-Bryan rotation.

The comments I received made me want to understand this. I'm not sure the following will fully answer the OP's question, but I'm hoping it'll at least be a step in the right direction. A little more testing (after a more thorough reading of the question) gave this result. I did enable displaying the object local axes to make things clearer. 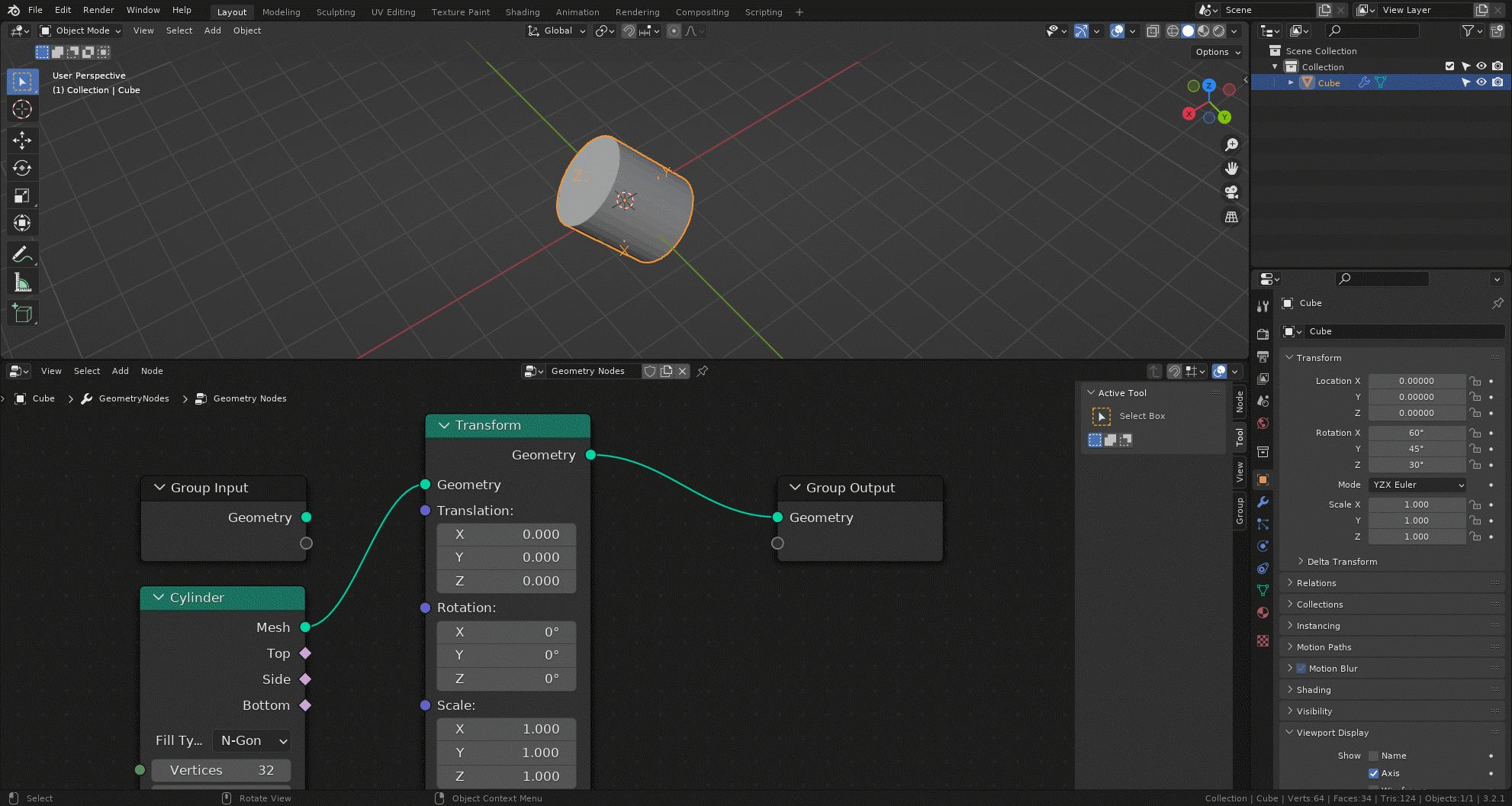 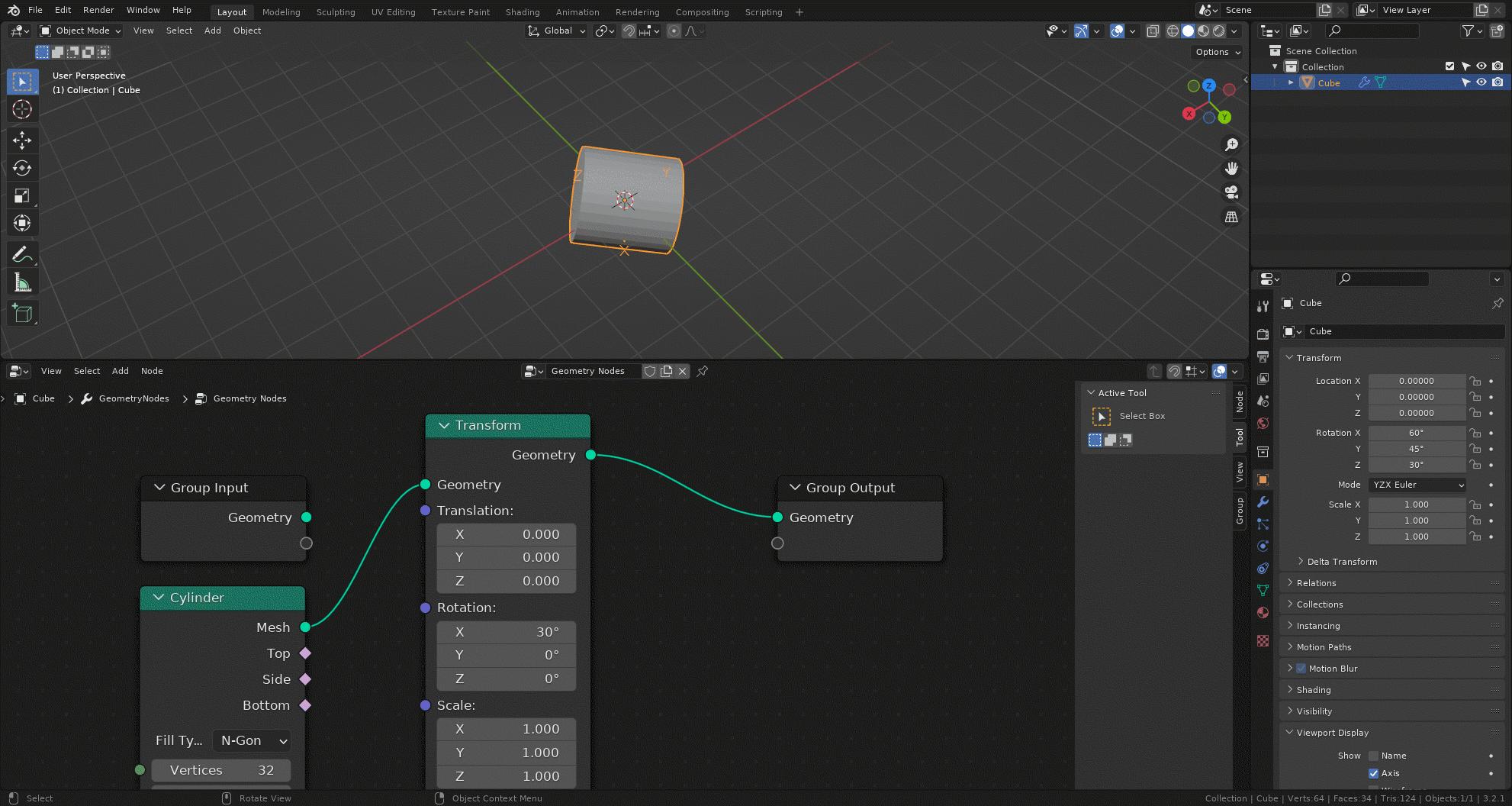 Look at the rotation set in the Object Properties panel, and at the local axis indicators. It seems that the local axes inferred by the rotation in the Object Properties are taken by Geometry Nodes as the axes around which to calculate rotations and along which to do scaling and translation. Look at the rotational difference between the two images, and you'll note that the cylinder is rotated about the object's local axis, which is indicated by an X (there are also lines going to the object origin, but those are obscured by the object's geometry).

2
Geometry Nodes - How to randomise rotation around just one axis
2
Geometry Nodes Align to Curve/Face Problem
3
How to auto-smooth in Geometry Nodes?
1
How to get different instances of an object created using a Random Value node?
2
Transfer/Align curves normals to faces normals
3
Values for Rotation and Vector sockets in Align Euler to Vector node?
0
Error while converting from Vector to Euler angles (red link)