In the Blender Game Engine, I used servo control to move a cube along the x axis when "W" was pressed. That worked fine, but when I used the exact same settings (except for direction, of course) to make it move on the negative x axis when "S" was pressed, it wouldn't move. I even tried changing the direction to the positive x, and that worked fine. But when I switched it back, it didn't work again. And I don't think that it is because of directional friction, because this same thing happens when it is on a different platform, or even in midair. Also, it works fine when I don't give it an x limit, but even if I give it a limit of 10000 it wont budge. And I really need that limit on it. Does anybody know why this is happening? Thanks!

Since you are moving the Object in the negative direction ( -X ) you need to set the minimum limit instead of the maximum and it should be negative as the force applied on the object will be negative : 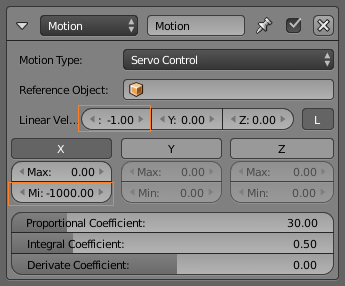 11
Game Engine does not conserve momentum
3
Ideas for how to make a cube explode into smaller cubes in game engine
0
Game Engine: Cube is rolling instead of moving forward
2
Blender Game Engine Rigid Body Instability
0
How do I apply force to an object that must move with the forehead?
0
BGE: 6DoF constraint - change in real time