I'm dealing with a Nodegroup that receives the output of several Texture Map nodes. One of those nodes needs to receive the result of some calculations as vector mapping data.

I could have such calculations dangling at the left side of the involved Texture Map node, connected to its Vector input, but I intend to distribute this material among friends, so, I want something a little simpler and tidier to reduce the chance of mistakes on their part. What I'm doing is including such calculations inside the Nodegroup, too, as a sub-block that doesn't contribute to anything other than this auxiliary output to feed that Texture Map node (the attached image is a simplification. The actual Nodegroup is rather large, complex, and full of inputs). 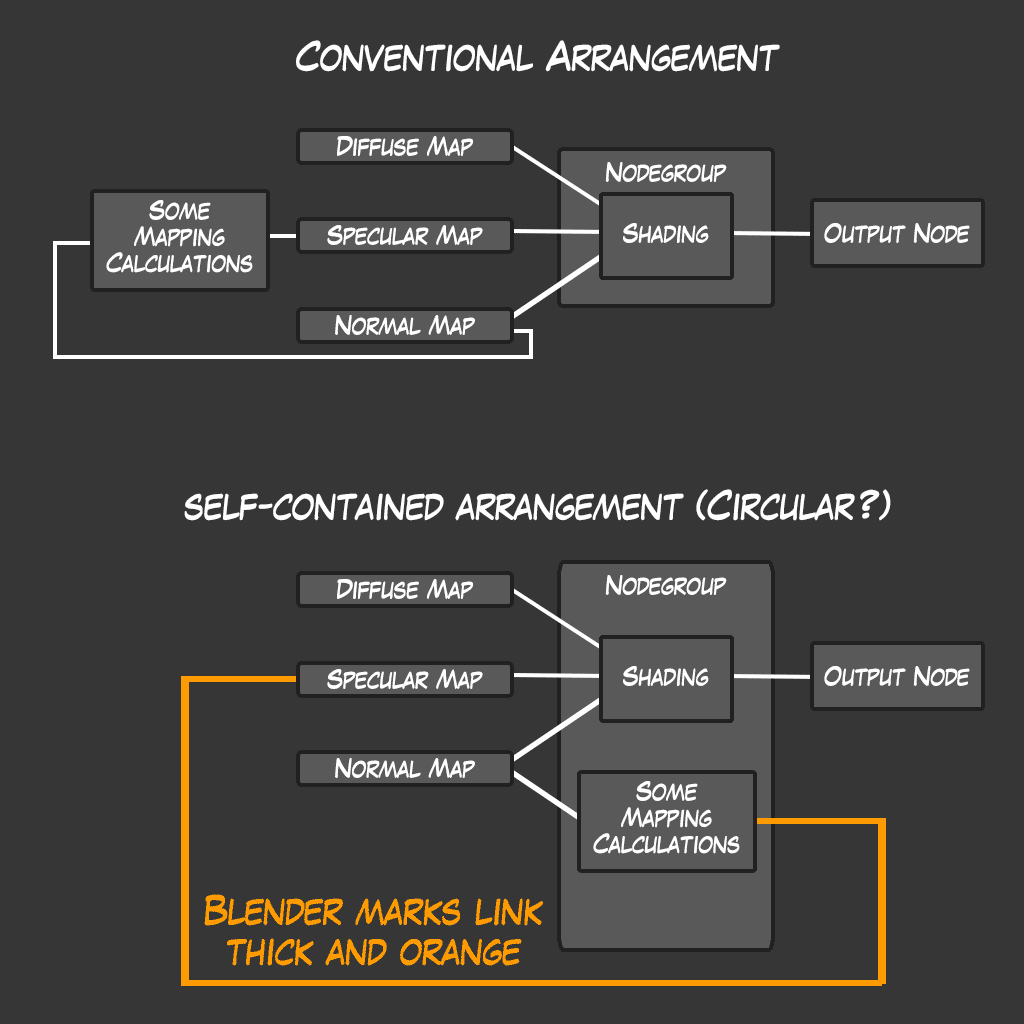 It does work, and the results are correct.

But I don't know if it is a good idea. That kind of thick orange link looks like some kind of warning (for the life of me I can't find what it means in Blender's manual), and I'm noticing that sometimes I'm having to force a recalculation of the material by tweaking some other input field to make Blender react (I'm on Mac, so, I don't know if it's a Mac issue or a Blender-level one). The alternative is to put the mapping calculations back outside the Nodegroup, but I'd really want to spare my friends the hassle they would mean (they re-use data from a normal map, meaning more links criss-crossing the node tree).

So, my questions are:

Nodegroup output connected back into the same nodegroup is an invalid connection.
Even if there's no circular dependency.
Such connections will not properly update, or work at all.

Two identical setups, but one of them goes through a nodegroup

0
Alternating colour striped material
1
I want a procedural texture on a PNG "Decal". How do I set up the nodes?
1
Rotate (generated) UVs of environment texture without mapping node
4
How do I displace/distort a texture map with another texture map?
5
How to avoid violating energy conservation when making shaders and node groups?
1
How does the Attribute Sample Texture node work?? I'm a beginner at Geometry Nodes
4
How to tidy up node arrangement in Shader editor
2
Red shader node noodle (line) from node group vector output to image texture vector input