how to pack received data into a list? [closed]

This question was put on hold since it doesn't seem to be strictly about using Blender as defined in the help center. If you can rephrase it, [edit] the question to make it on topic by focusing on the Blender specific part of the problem.

I have a range of values. Which comes from python-redmine in column one by one. I tried to make a list out of this by wrapping it in [] and thus I get only the first value. This is already a result. I have enough. But I do not understand how to work with it using regular expressions. I need to split the parameter into epxx, seqxx, shxx where xx = two numbers. I wrote a regular expression

and checked that it works with the basic version. But if I insert my "list" then everything breaks down 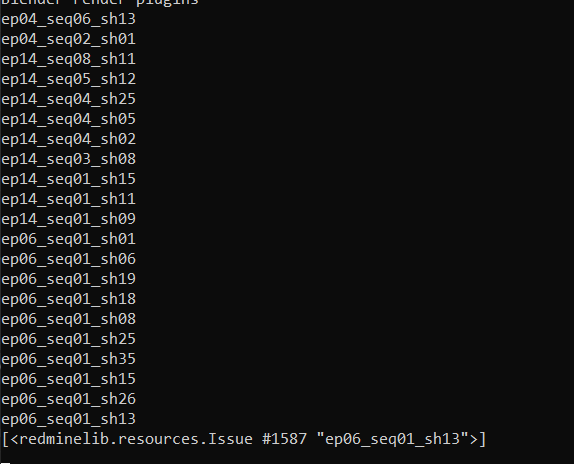 here's what it looks like for a single file. Now we need to put one value of the issues list there. And to be more precise, create a list of issues 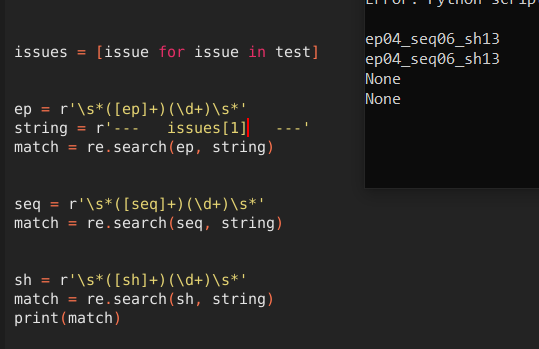 So you can do this in couple of ways.

If that doesn't work you can also try

You can also do this even simpler with list comprehension.

But again, if you're able to do the last two then the first one ought to work right away, because the second two require the object to be iterable.

A few other pointers:

print() only writes the value to the standard output. If you want to store the value in something else that won't do it.

Writing [variable] doesn't convert the variable to a list, it just puts that object inside of a list.

Writing variable == other_var with two "==" rather than one is asking Python for the identity of the object, not setting the value. Setting the value is one "=". Using "==" will always return True or False (Boolean).

EDIT: Regarding your additional question about RegEx:

Additionally, your regular expression is not correct, which means you will always return None, because it's not finding it, even if you do figure out a loop.

Or just omit regex altogether and just do:

Which would give you the same exact result.

3
Populate a list with custom property dictionary data
3
Serial data from arduino not received properly
6
Controlling drivers with data received via TCP/UDP
3
Splitting an objects data_path into hierachal list
2
Help with 3D data representation algorythm
1
Return list of nodes inside material?
3
How to pack data into .blend with bpy.data.libraries.write
0
Data Visualization - Iterate through a Collection of objects and set Z scale to a value from a specific csv file column index
0
Trying to use dynamic values in PropertyGroups