Is there a way to update Blender without deleting it and downloading the new version?

I like to stay up with the latest version of Blender. I use Blender on my Macbook Pro and it is kind of a pain to update Blender because you have to delete it and then re-download it.

This isn't a huge deal but is there a way that you can just update Blender without deleting it and re-downloading it every time? It is kind of ridiculous to just re-download the entire program when the new version consists solely of bug patches.

Blender doesn't have an (auto-)update function that would do this for you.

Some years ago I experimented with a way to create binary patches - that works pretty ok, but the experiment never took further form, as an entire infrastructure to support this needs to be created, and for such an effort no resources have been found (people willing to work on it, maintain it and the servers).

Until that day you'll just have to download the entire program. Note that you don't have to install Blender, you can just run it from the location you downloaded and extracted it to (at least on Linux and Windows, so assuming it works also on OS X).

That isn't possible with the binaries. However, you could do that with the source code.

You could download the source code from the repository and compile it by yourself. With this method, you only need to download the files that changed. If you choose to do this, you will need to compile Blender each time you update your code which is more time consuming than just installing it.

I heared that you can install Blender via Steam and it should be updated automagically.

If your on Ubuntu (or some linux distro with automatic updates, basically all of them), you can choose to download the latest development build. You'll get the updates then. If your interested, here's a link: http://mbah.net/2010/11/11/installing-blender-2-55-beta/

If your OK with using the buildbot dailies, you can use BlenderUpdater application:

You can install Blender via Steam, which has a built in auto-update feature.

This should keep your Blender installation up to date automatically.

After googling for a while, found this blender updater program. 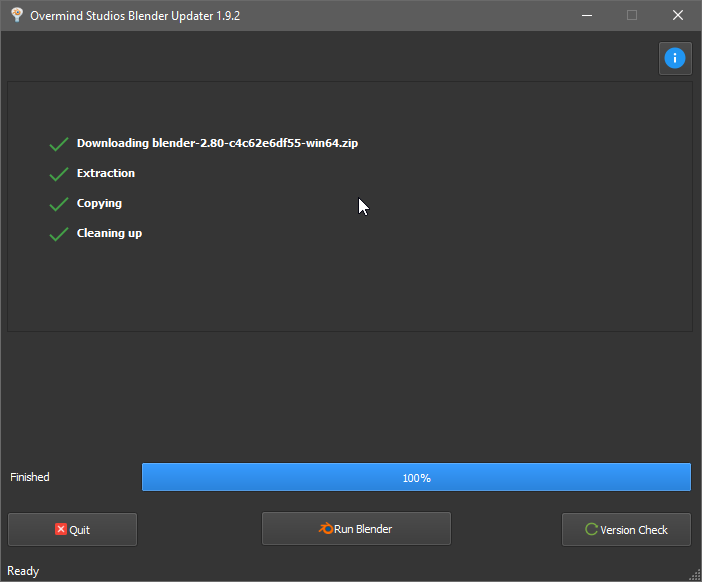 Not the answer you're looking for? Browse other questions tagged versions osx or ask your own question.

19
Updating to latest Blender version
2
Should I update Blender?
3
Why is the Steam version of Blender taking so long update?

13
Is it advisable to update Blender to the newest version as soon as possible each time?
10
Are the books written for blender 2.5 or 2.6 still useful for the latest blender 2.7 version?
3
Why is the Steam version of Blender taking so long update?
2
Should I use Blender 2.44 rather than the latest version of Blender?
6
Transfer settings to new version of Blender
4
What is the proper way to update a portable Blender installation while keeping user settings?
1
Advice or workarounds to use Nvidia Drivers in Mac OS Mojave
0
Is there a way to transfer a rigged mesh from a new version of blender to an old one?