I am fairly new to Blender and don't have a very firm grasp on it. I was wondering if anybody knew how to add a .png overlay on a different keyframe.

Assuming your circle is an image with alpha, you can use one MixRGB node to mix the circle into the wood, and another to control the Alpha.

There are many ways to do this. For example, to mix in the Alpha you could use a Math node set to Multiply instead. A Fac socket is designed to receive a float value between 0.0 and 1.0, and the MixRGB node provides that, so I thought it would make a good example. As in other graphics applications, when we are dealing with alpha values, 0.0 is represented by black, which results in 0% opacity (100% transparency), and 1.0 is represented by white, which results in 100% opacity (0% transparency). (Forgive me if I'm over-explaining, but you mentioned you were "fairly new to Blender" so I'm trying to be thorough.) That's the reason the Color1 input socket is set to black in my example.

Note that the keyframing (yellow slider) is on the Value node. You can of course keyframe the Mix slider directly, but this way you allow for the possibility of letting the Value node's automation simultaneously control some other parameter, should you decide to add one at a later point.

If you end up adding several of these, it might be a good idea to start labeling your nodes to make it clear what each is doing:

On the subject of keyframes, to make an abrupt transition you can either make sure the 0.0 value keyframe is the frame immediately before the 1.0 value keyframe, or you can navigate to the Graph Editor, select the parameter you have keyframed, and press T. Then set Keyframe Interpolation to Constant. This will ensure that the transitions are immediate. First there's no circle, then suddenly there's a circle.

You might find that you want to reposition or resize your circle at some point. For that you can precede the Image Texture node with a Texture Coordinate node followed by a Mapping node. For an image texture, usually you will use UV as the mapping method. Here I've set the image extrapolation method to "Clip" so that the circle won't repeat if scaled down. 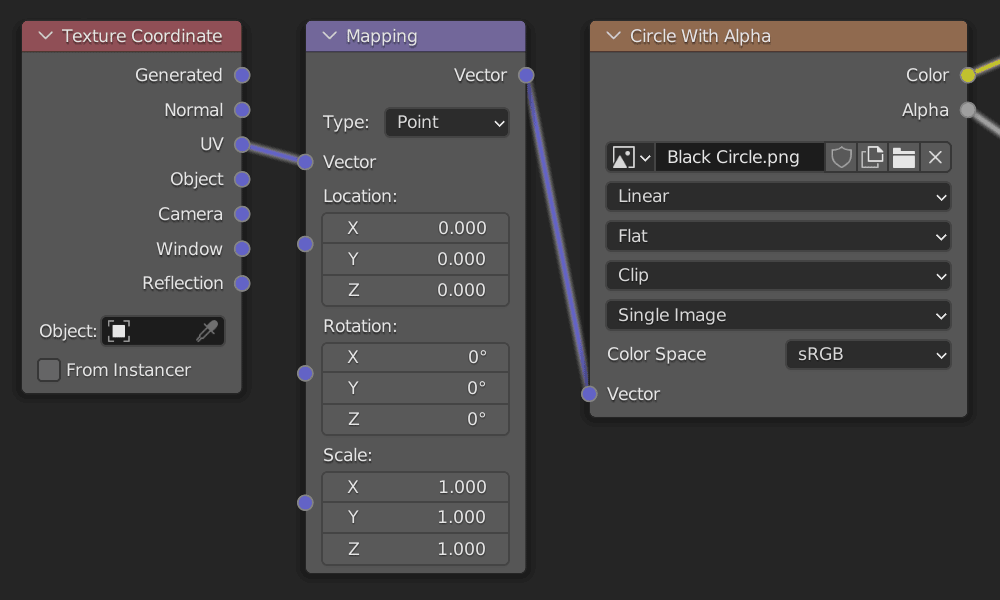 Now that you know how to overlay an image with transparency, you might consider going procedural for something as simple as a black circle. With this method there's no need to think about image resolution, it uses less memory than an image, and it's very customizable. Using Object coordinates will place it on the center of the object. Add a Gradient Texture set to Spherical, then route that through a ColorRamp set to Constant interpolation to change the smooth gradient into a flat circle with a hard boundary. 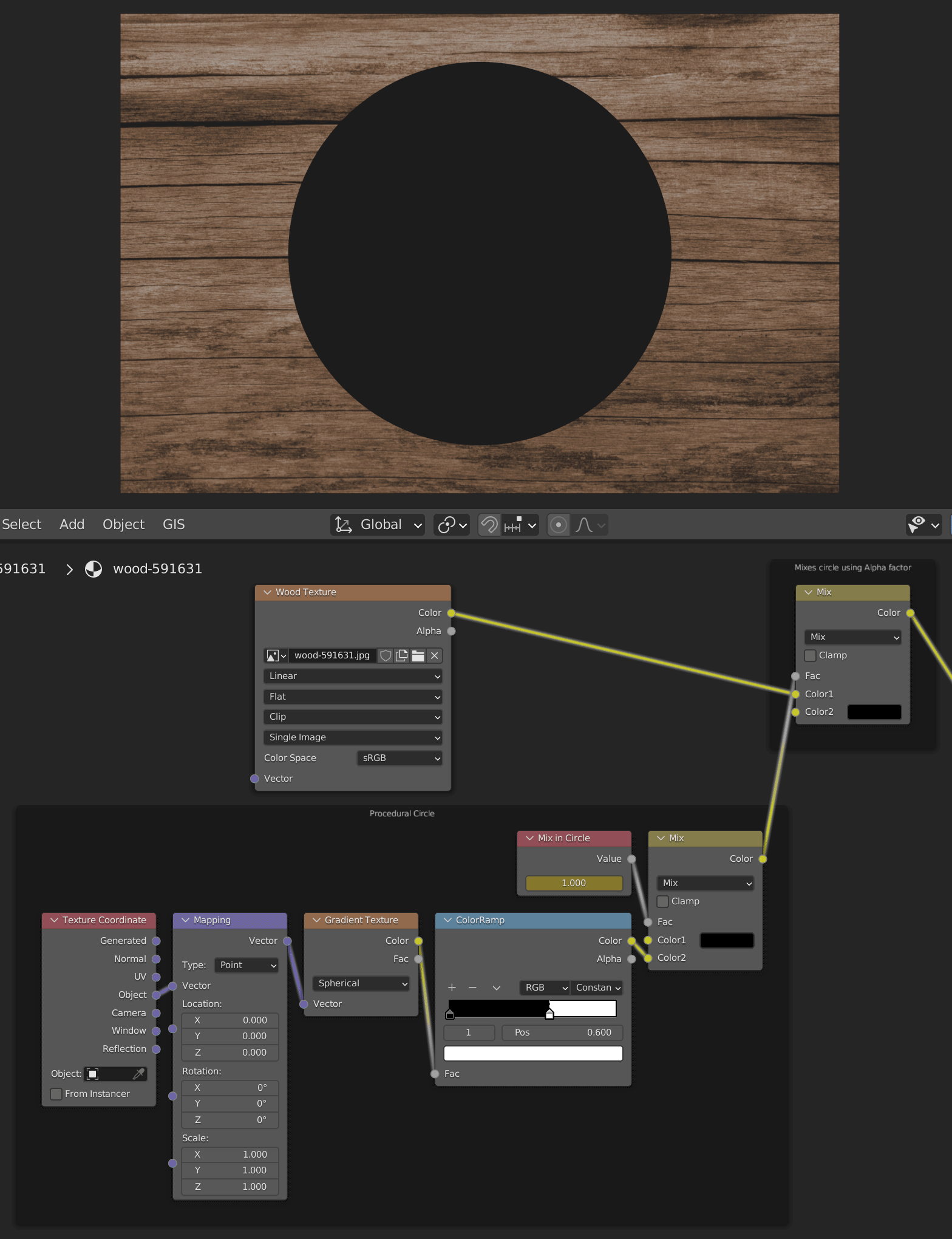 Notes: ①"MixRGB" is the way this node's name appears in the Add menu. In recent versions of Blender the node itself is displayed with the name "Mix", in case you are wondering why I refer to it as "MixRGB" in this answer. ②The nodes on the right in my example are from the Images As Planes add-on. I imported the texture as "shadeless" so it will have a fixed brightness value and not receive lighting. Your node tree likely looks different here, but don't worry about that. ③ Technically Object coordinates will be the coordinates of the object's Origin, so there is a possibility that for you this will not be the center. There are various ways to get around this, such as repositioning your object's Origin, using the coordinates of another object, or simply offsetting with the Mapping node's Location sliders.

You can also try this node setup: Mix your original material with the image texture of the circle (give the color you want to your circle, keep the background white) through a MixRGB in Multiply mode, keyframe the Factor of the MixRGB in order to make the circle appear:

If you need to mix 2 differente shaders, use a Mix Shader and plug the Image Texture into the Factor, mix it with a MixRGB in Multiply mode so that you can make the circle appear:

Not the answer you're looking for? Browse other questions tagged animation texturing shader-nodes or ask your own question.