How do I make ambient light in building with sky?

I'm creating an abandoned factory/warehouse building, and I've run into a lighting problem. I've searched a lot on Blender SE for a solution, but none of the questions I found helped. This question is very similar to mine, but the answer is not helpful at all for me, as in my case I have a very bright, direct light shining directly into the building.

For my world's sky, I'm using Background surface with an Environment Texture using an image. Here is the node setup for my world:

A lower-quality version of DSCF6016.JPG (the sky).

Here's a screenshot using Scene World, where the sky looks perfect, but there is absolutely no light inside the building, except where the sun hits the floor: 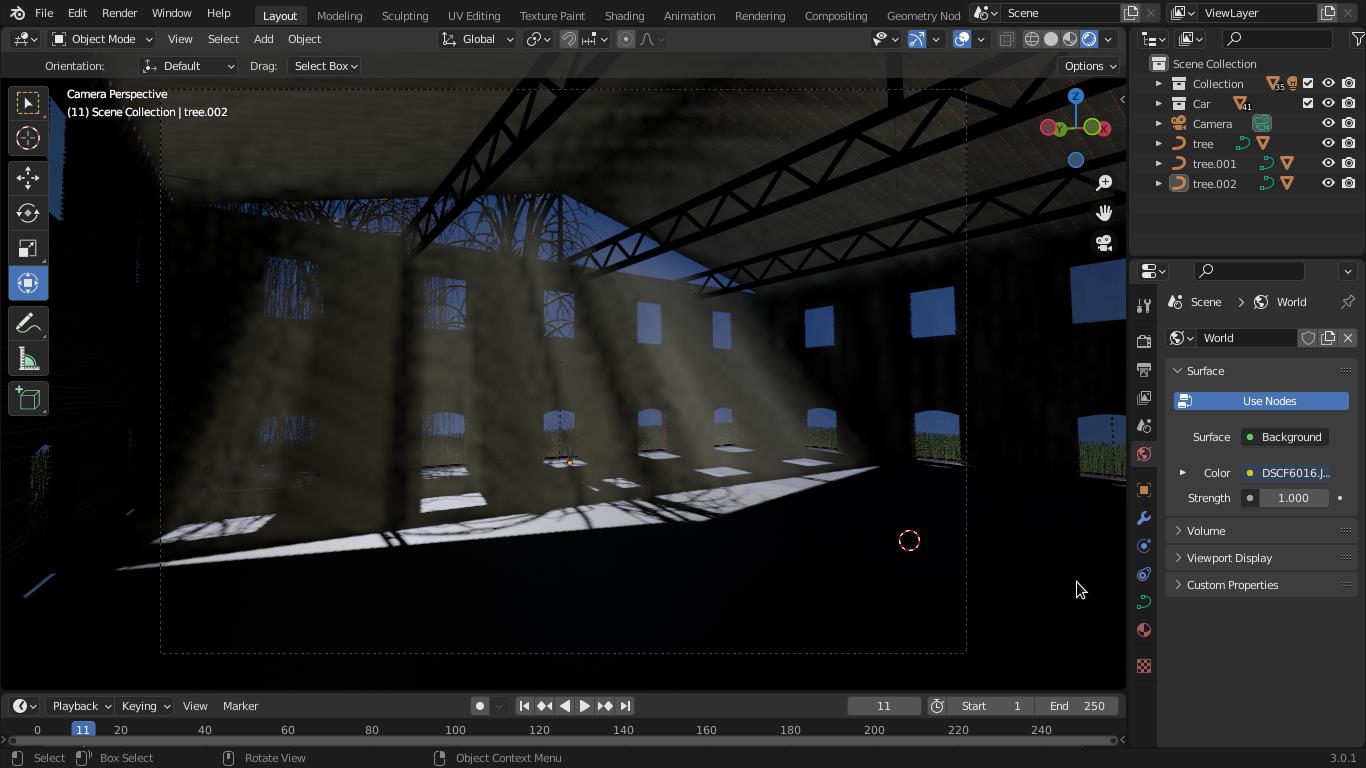 Turning up the strength for the scene world doesn't really do anything until the strength is extreme (>400), and even then it just turns the floor blue, and does nothing to the walls.

When I uncheck Scene World in the Shading dropdown, and adjust the settings, the interior lighting looks pretty good, but the sky is dull: 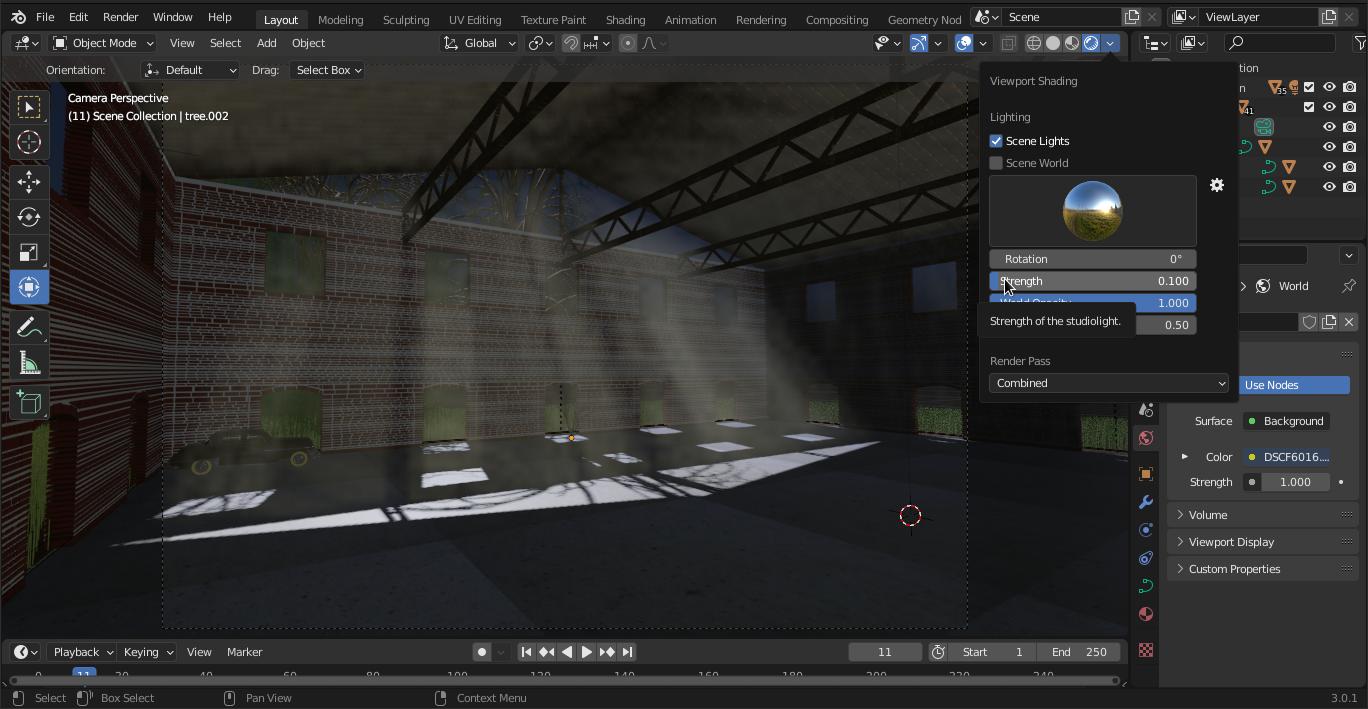 If I turn up the strength (where the cursor is), the sky looks better, but then the interior is too bright!

When I switch from using my image to using a sky texture, the building still isn't light.

Since the building is abandoned, there can't be any artificial light in there. Is there a simple way to get the sky like the first image, and the interior like the second one? I'm still getting used to Blender's fine points, so there may have been something obvious I missed, but I've been trying to solve this problem for hours, and I can't seem to get it right. I'm using Blender 3.0.1 on an Ubuntu 20.04. I can provide more screenshots/information if you need.

lighting world
Share
Improve this question
asked May 30 at 20:53

Since the first part of your question is answered by a (somewhat) duplicate question (just using very different words), I will attempt to answer the second part of your Q (although putting two questions in one is technically discouraged here) so as to make it a valid question in it's own right (which is also likely a dupe, I just can't find a link at the moment).

If you want to separate the background (HDRI) image from it's lighting influence, you can use a node setup similar to what is pictured below in the World shader. I used black as an easy example, but you can just as easily use different colors, or even a second HDRI. The reverse works as well - if you want the light from the HDRI, but want to replace the image with something else, just reverse the order of the Mix Shader inputs: 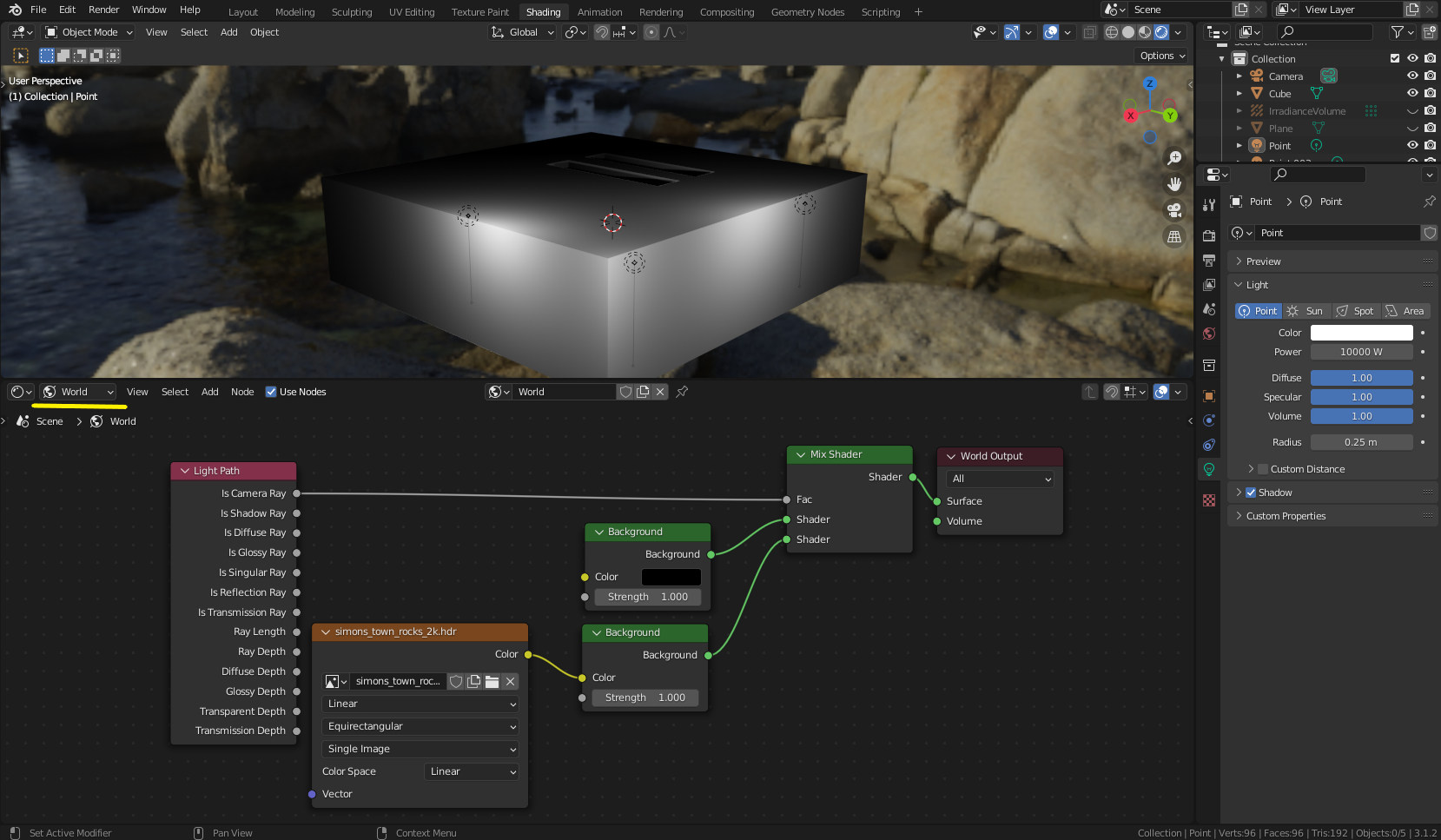 Not the answer you're looking for? Browse other questions tagged lighting world or ask your own question.

16
How to handle thousands of lights
2
How to properly light a scene that's both indoors and outdoors
0
how to raise ambient light in a animation
0
Why does the light not illuminate inside the building?
1
How to set ambient light with EEVEE

4
What has shut off rendering and display of the world background?
3
Evening sky, or how do I use the Sky Texture Node?
5
How to attenuate an area light so that it falls off more rapidly than Quadratically