Particle emission from a verts fixed locations over time

I have created a particle system that spawns from an object over time. 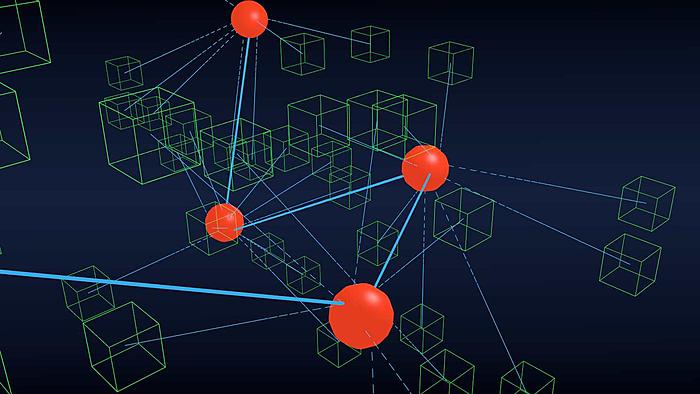 But to spawn cubes from vertices over time I have to use a gradient texture on an object that is UV unwrapped. Which means that i have to use a plane as the particle emitter. This creates problems when I emit from another particle system to create the red balls. I end up emitting from both of the vertices at that location, creating 2 red balls in one spot (to fix this I reduce the balls but there aren't enough to fill the emitter length).

Can I apply a texture to a mesh that has no faces (thus eliminating extra verts I don't want)? Are there any other ways to emit a particle system over time?

I want to keep the system simple and attached to one emitter object, so that it can scale easily.

Instead of trying to get one particle system to emit in the right places you can add a new red sphere in the place and animate the visibility of it. The particle system on each sphere can also be set to emit at a specific frame. You can then add one curve object with a hook to animate the line linking each node together.

You can automate this task with a python script, with a list of data setup at the start you can easily adjust where the points are created. The script I created is a bit longer than expected so I will leave the whole thing available on gist.github.

Each line is an array containing the frame, number of particles and location of each red sphere you want to generate. This can easily be altered or expanded for each project you do.

Next we setup a few variables that define what object gets replicated at each point and used for particles, then some particles options that you may want to adjust each time.

The rest of the script simply loops through each item in the mainpoints array and creates each item and adds the particle systems for each one. Then it creates a curve and animates the hook to travel to the next location. Along the way locations are keyframed so things are in the right position when they need to be.

Any settings for the particle system can be added to the script and some variables can be set at the top of the script as I have done for easy adjustment.

I just revised the script. In revision 3 the script scans objects with a name starting with 'data-' and then takes two numbers from the name, the first is the frame to show and the second is the number of particles to emit. This replaces the rigid list of data and allows a visual placement of each point. The earlier revision can be accessed at the above link if it is desired.

2
How to model connection between tables?

23
How to turn particle emission on/off?
3
Non-Random Particle Emission from all vertices
0
Explode modifier size change over time?
0
How to Tweak Dragon Scales Scaling from a Particle Emitter
0
Particle Object to Inherit Uniform Colour from Emitter
3
How to add a texture to the emitter surface of a hair particle object (over riding object material)
2
Linear Extrapolation of a Particle Emission Trail