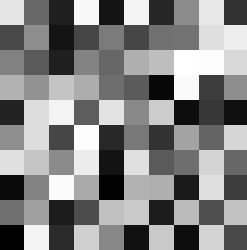 I want to map it into a normal map, with black being lower parts and the white parts being raised. I tried this node map: 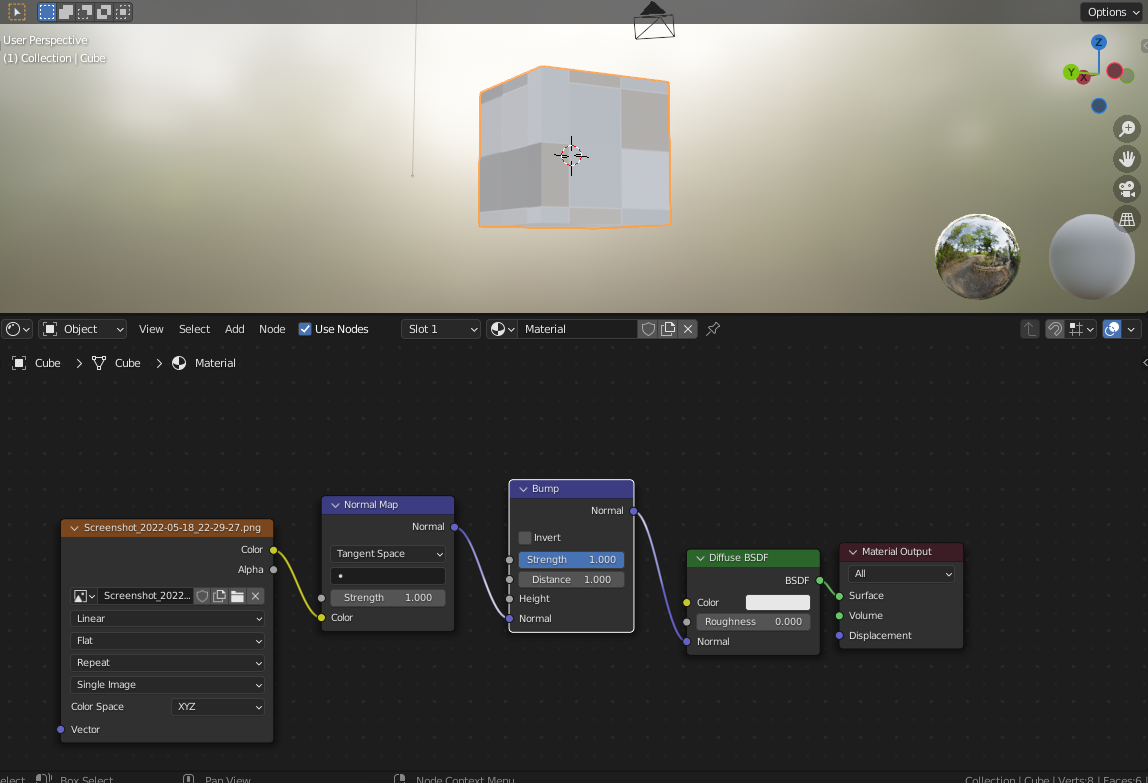 But its evidently not working. How can I convert a black and white image like this into a bump map?

displacement shader-nodes height-map
Share
Improve this question
edited May 20 at 3:33
Aaron
asked May 19 at 5:44

It can be converted into something like normals, but it requires gradients interpolating height levels (like set a bit of blur). Your image represents only heights, but orientated at the same direction. Higher or lower squares on surface will be described in normal map by the same base violet color (it means flat).

What have you described sounds like you are looking for Height map? 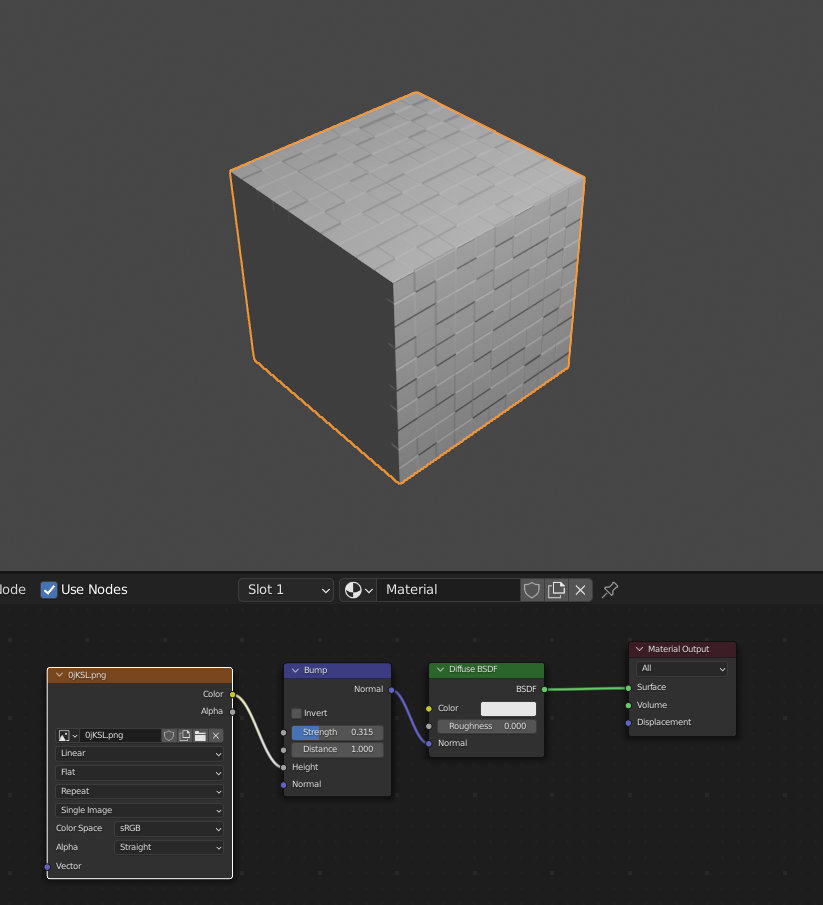 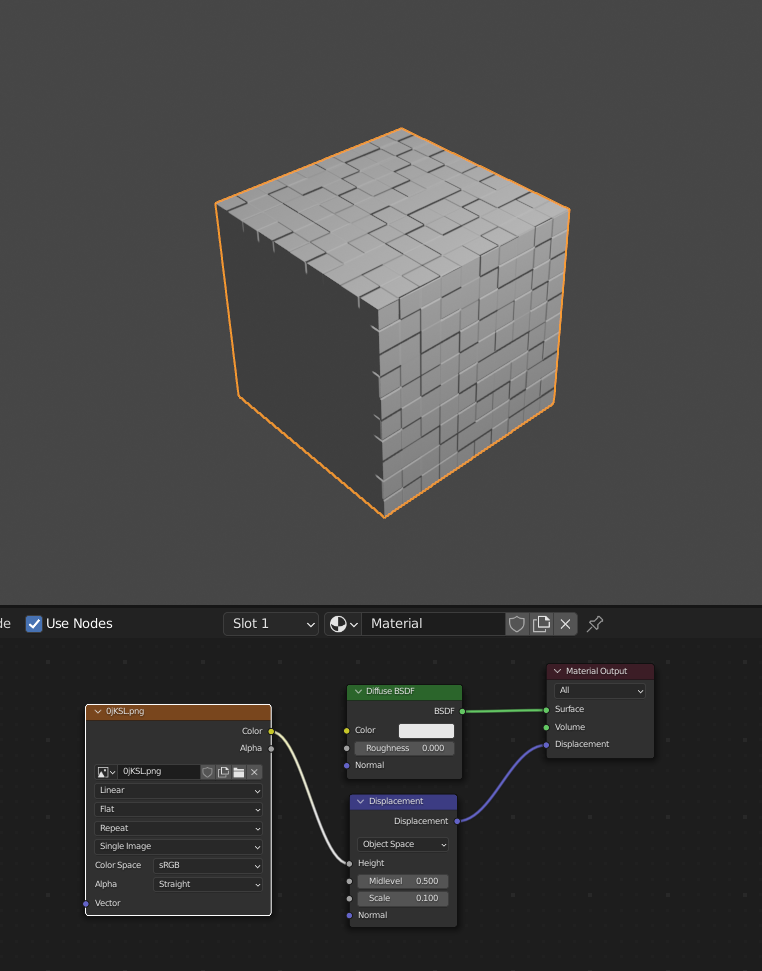 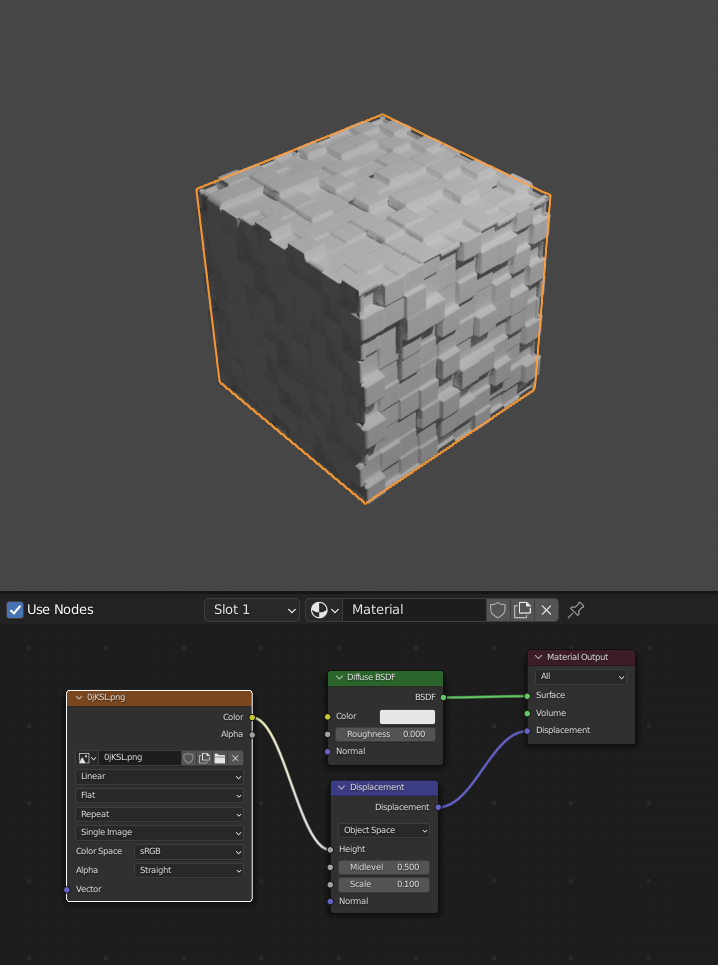 Normal Map
If you are really looking for Height map to Normal map convert, check this Bake Normal ... 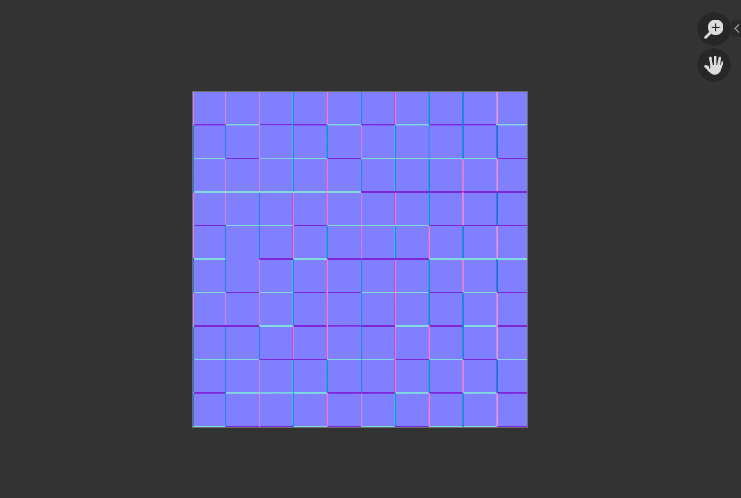 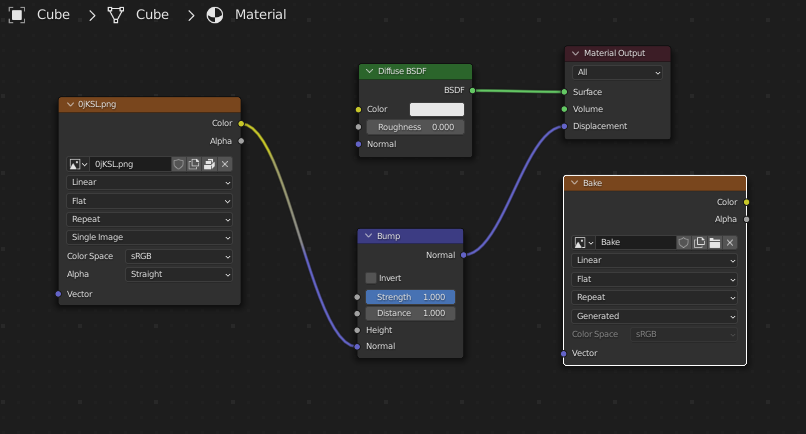 When you use a grayscale image to simulate height, it's either called a displacement map or a bump map. There's nearly no difference between the two, beyond what they're used for. Because you're interested in using your image to change the normals, it's called a bump map. You're on the right track with your image, you're just doing a little bit too much. Here's the right-ish setup: 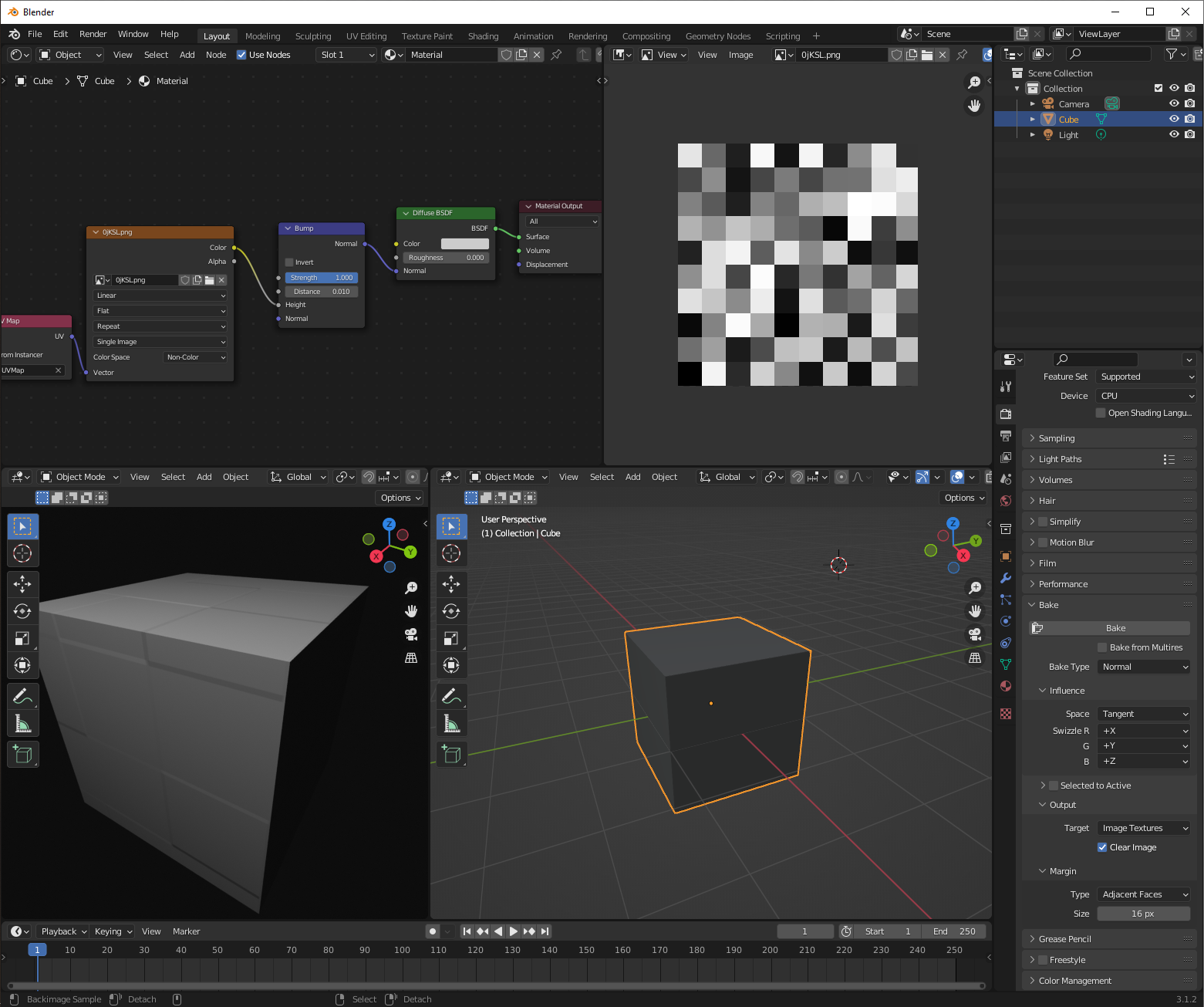 I didn't use a normal map node; bump mapping replaces normal mapping. It's a different technique to do the same thing, that has its pros and cons as compared to normal mapping.

Before I get any further, let me point a few things out. The first is that I set the distance to a very small number. The normals that a bump map node generates are the normals that you'd get if white meant a displacement of 1 Blender unit-- 1 meter, typically-- over black. For a cube that's only two units cubed, that'd be ridiculous. We're scaling it down here to centimeter level bump instead, by setting the distance to 0.01. Default distance is almost never a good idea.

The other thing is that your bump map doesn't look very bumpy, right? The normals are the only thing we're modifying. We're not getting shadowing from our bump. And the bump that you've provided is very solid, so what we're seeing are very sharp angles, which occupy nearly none of our visible cube. Neither bump mapping nor normal mapping are good for representing this particular displacement. I'd recommend loading this image into Photoshop or GIMP and running a blur on it, and then compare using the blurred bump to the original bump.

Finally, I set the bump map as non-color data. This means that if the image file contains a 0.5, that's halfway between black and white. In sRGB, it's not. Whether we want non-color or sRGB depends on how we made our bump map, but typically, bump maps are stored as non-color data, so we should read them that way. XYZ is not the same thing as non-color-- it is a different color space that is rarely used.

We can bake this to a normal map if we want. It won't be significantly different, but doing so will improve how some bump maps look under magnification. (It will also make them, and the mesh itself, harder to edit. That's the main tradeoff.) To do this, we can just bake normals to a new image, directly from this same material: 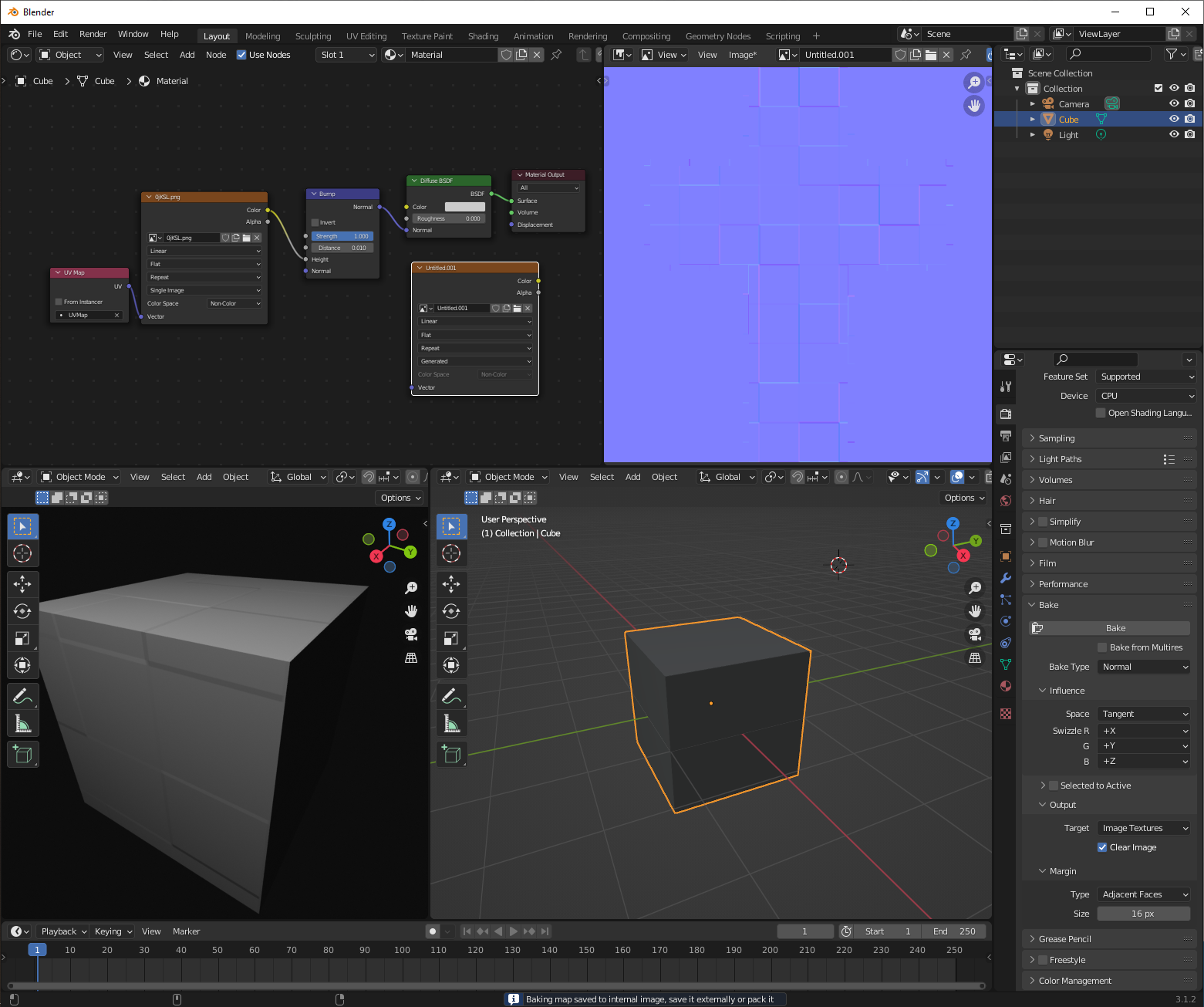 There's no need to do anything fancy; Blender bakes the normals of the shaders it's using. I created a new image + image texture node, on non-color, and made sure it was the actively selected node (white border), then set my bake type to "Normal" and hit the Bake button.

Not the answer you're looking for? Browse other questions tagged displacement shader-nodes height-map or ask your own question.

6
How to generate a normal map from a bump map?

3
Turn cycles normal map into geometry displacement?
1
Normal Map + Micro Displacement = Bug?
1
height map for normal input sharp edges
4
I want to turn a 3D mesh into a height map and then use the height map to create a new 3D mesh with no undercuts
3
Rendering wireframes from simple black and white image (DEM)