Can I refer to another object's properties from a Cycles node shader? Drivers? If so, how?

I am trying to develop several shaders that need to take into account the position or orientation of another object in my scene. Seems like a generally useful thing to be able to do.

And here I'm moving a cube with the material close to the origin to see the effect.

The .blend file for my example can be found at...

I can use a geometry node to get things like normal and position from the shaded object. But I'm unsure of how to get properties from the other object.

I have just started down the road of using drivers. I figured I could create a custom property on the shaded object and add a driver that sets it to the other object's properties. Then I'm hoping I can use an Attribute node to get at the custom property.

However, I'm at a loss how to best do this via the UI. In particular...

If someone can provide an extremely simple example for Cycles it would help me a lot. How about a shader for a UV Sphere where the sphere is green where it is within 1 blender unit of an Empty and red where it is more than 1 blender unit from the Empty? Can even just be in x to make things simpler.

As you have said you can use drivers were you get X,Y and Z separately from using drivers then combine them and use the result :

here is one of the drivers : 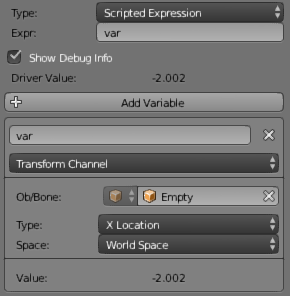 and this is the what changed in the node setup : 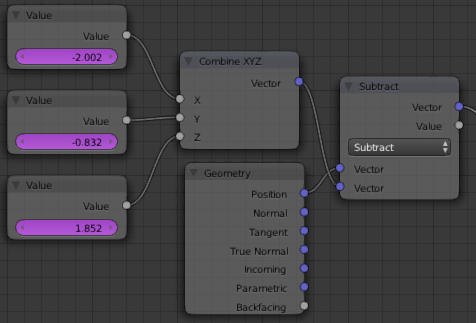 and this is the result : I'm moving the Empty object 'which is not visible'

Note : i didn't use driver directly on the 'combine XYZ' because it was clipping negative values

Since blender 2.67 you can write a custom pynode or use Animation Nodes as shown below:

Note: Enable cycles first to access the color of the diffuse shader and use a expression node to get the desired and correct color values.

You can get the position of an unscaled, unrotated object through the use of object texture coordinates. It's unnecessary to use Python of any kind or any addons. 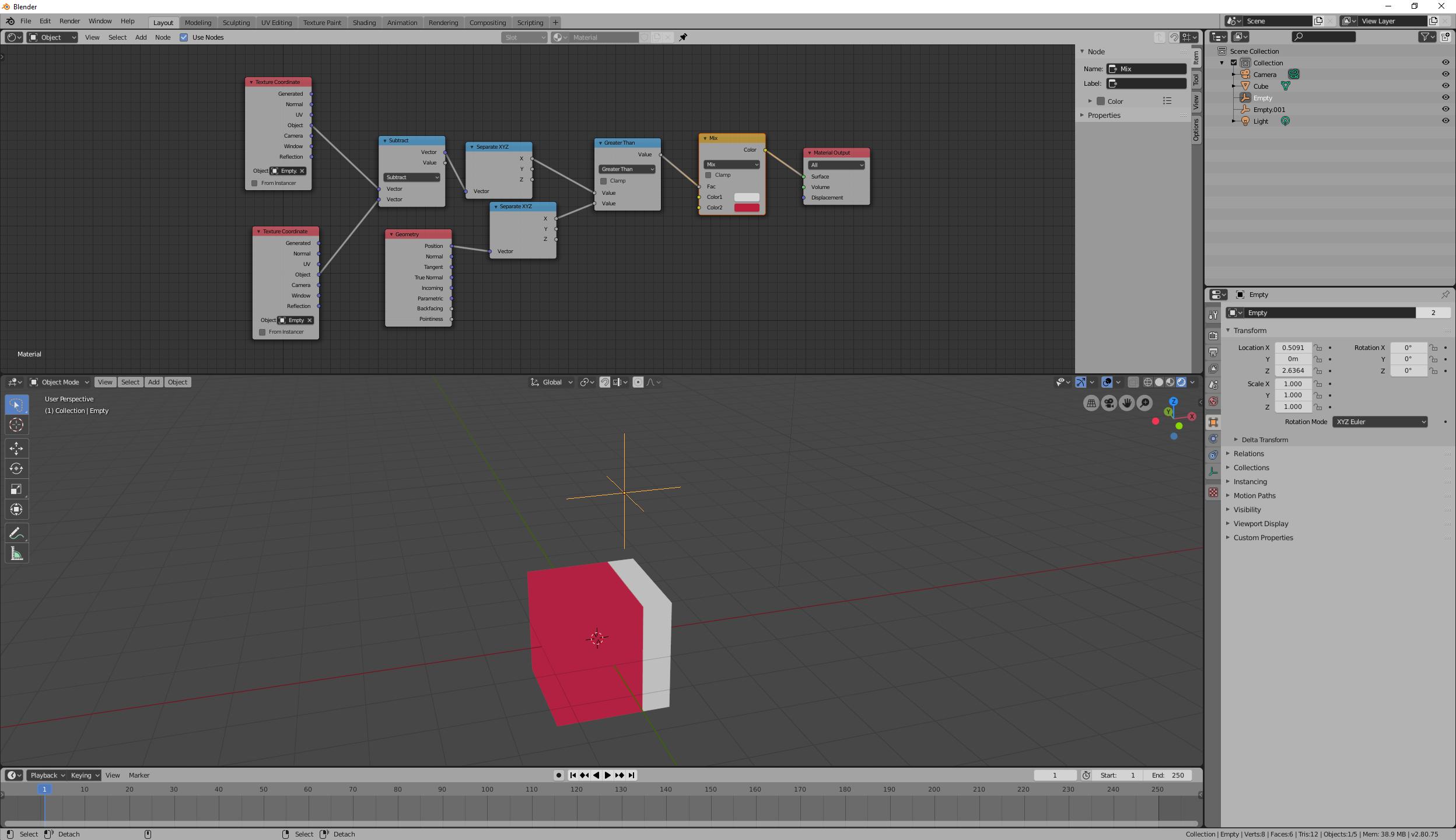 What if you want position, but you need it from something you want to scale and rotate? Create an empty, parent it to your object, and set up world space limit rotation and limit scale constraints.

I think you should be able to see where I'm going with the rotation. What is the Euler angle rotation of an object? Well-- the math on that one is harder than I feel like doing in nodes :) But you can create children to create basis vectors: one, one unit in local x from the object being measured; another, one unit in local y from the object being measured. By measuring the position of these empties, in the same manner as the first example, you can create a set of 3 basis vectors. And, if you want, you can compare them to your world's basis vectors (1,0,0; 0,1,0; 0,0,1) to create a set of Euler angles, if that's what you really want. (You rarely would, because Euler angles are awful for purposes of interpolation, and it's much easier to establish an axis-angle rotation.)

Make sure you have selected an object with a material, and the material contains a value node. This will create a custom property under the current scene, and drive the value node with the value of the current property. 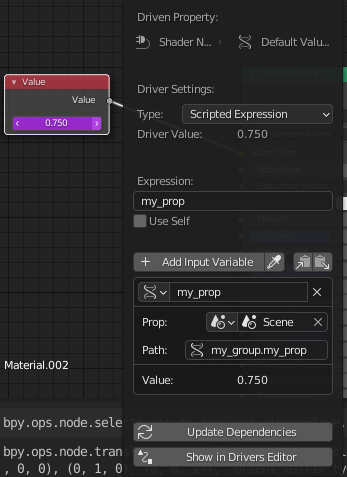 Not the answer you're looking for? Browse other questions tagged cycles-render-engine nodes shaders properties or ask your own question.

0
Can I use a property defined in a script as an input to a shader network?
20
How to make a wake behind a boat
11
Change color with object rotation
15
PyNodes, the bare basics
5
Animated procedural stylized water ripple in Cycles material
2
is there a way to streamline scripting these shaders and modifier keyframes?
2
How can I create a normal map that points 90 degrees upward from a flat surface?
1
Texture Changes When Object Position Changes
0
Getting different results with the same node setup (World output/Material output)

7
Cycles Node to tell Distance from an Empty
36
what can you call from the attribute node?
7
How can I use colours to separate texture node treatment?
2
Custom cycles node outputting shader
4
Can I use object's Custom Properties inside Cycles materials?
1
Building a Shader Switch | How to get custom values from individual objects?
4
How to connect value from custom properties to value of object's translate/rotation/scale
3
Adding properties to a shader node