Texture Node in the cycle render

I am working on cycle render using MakeHuman model. On MakeHuman , model has some texture images. I remark for example when I do a person with t-shirt that there is two images shirt_normals.png and shirt_texture.png. In the Node mode, I rely these images as mentioned in the below image. What is the difference between these images? And is my work is correct? Because, I could not remark any effect of the shirt_normals.png image. 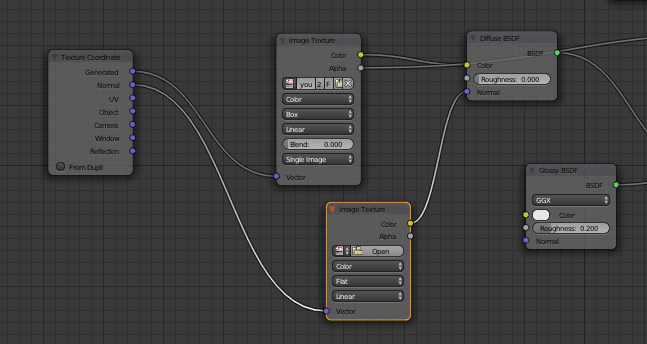 The texture (usually called a diffuse map) simply affects the color of the object. The normal map affects the normals to create a bump-mapping effect. This works by converting the red and green channels of the normal map to x and y (or y and x, I forget which) rotation of the surface normals (0.5 being straight up, or no change) to simulate small bumps and surface details for added realism. (The blue channel is actually ignored, though it is usually set at 0.5 as well which makes for the distinctive pinkish/bluish color of a normal map.)

As for your setup, you have two problems: 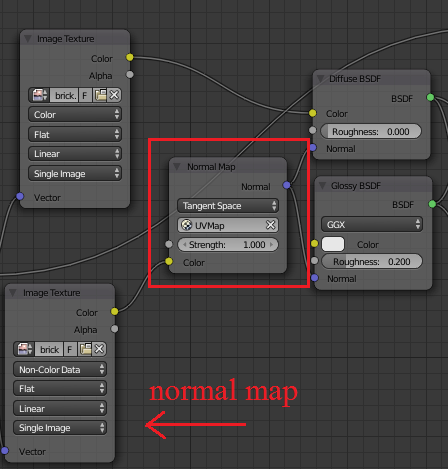 Credit to @Vladimir for image, this is a croped version of his screenshot as I don't have Blender available at the moment.

Not the answer you're looking for? Browse other questions tagged cycles-render-engine node-editor blender-internal-render-engine makehuman or ask your own question.

30
How do texture coordinates work?
23
Using a Normal map together with a Bump map
8
What are face normals?

1
Cycles texture stretching past the edge
1
Cycles is not using the materials created by MakeHuman
2
What is the difference between IK and FK in animation on blender
1
Texture problem with Makehuman model in blender
0
Import .mhx and export .stl on blender
6
How to render smooth alpha transistion between two objects?
3
Purely Node Based Materials
0
Set image texture node label based upon characters in filename/filepath string