Geometry Nodes: How to use the Random Value node? (Output is red) [duplicate]

Ask Question
Asked 11 months ago
Modified 3 months ago
Viewed 4k times
7
$\begingroup$
This question already has an answer here:
Why is there a red line when I try to connect one node to another? (1 answer)
Closed 4 months ago.

I've created a Group node that acts as a geometry switch. Plug in a few different geometries, and the integer you give it determines which geometry actually comes out. It works fine with a Value input, but I want to give it a random value. Feeling clever, I assume this is what the Random Value node is for... however when I connect it the output wire turns red. 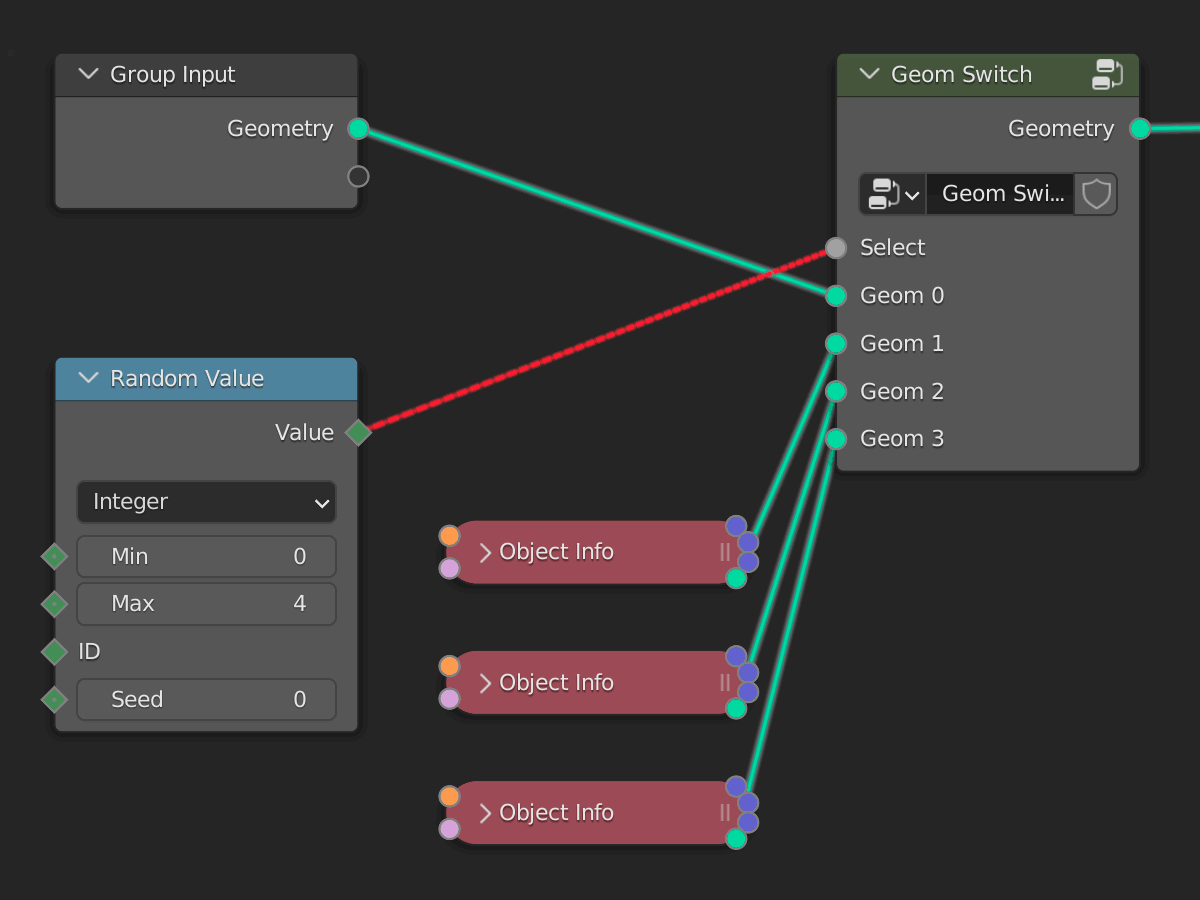 Looking to the Blender Manual, I tried to understand more about how the Random Value Node works. The ID input socket is perplexing me:

An ID to drive the random number generator seed. By default, this input uses the same value as of the ID Node, which is the id attribute of the context geometry if it exists, and otherwise the index.

Okay... next stop the ID Node

The ID node gives an integer value indicating the stable random identifier of each element on the point domain, which is stored in the id attribute.

The node to set this data is the Set ID Node node.

The Set ID node fills the id attribute on the input geometry. If the attribute does not exist yet, it will be created with a default value of zero. The ID is also created by the Distribute Points on Faces, and it is used in the Random Value Node and other nodes if it exists.

The input node for this data is the ID Node.

From all that, what I gather is that the Random Value Node has an ID socket that is for accepting a value that drives the random number generator seed, and the ID Node also deals with this ID, and the Set ID Node can set such a value, and this is used by the Random Number Value Node... so we are right back at the beginning.

None of this documentation really explains how to use these nodes with one another, and plugging both the ID Node and the Set ID Node into the Random Value Node's ID socket have made no difference in the output. It is still red.

How are these nodes all supposed to work with one another to produce a random integer/float/etc that can actually produce a valid value that works with other nodes?

if you use it like this you should get what you want:

The output now has the cirlce. 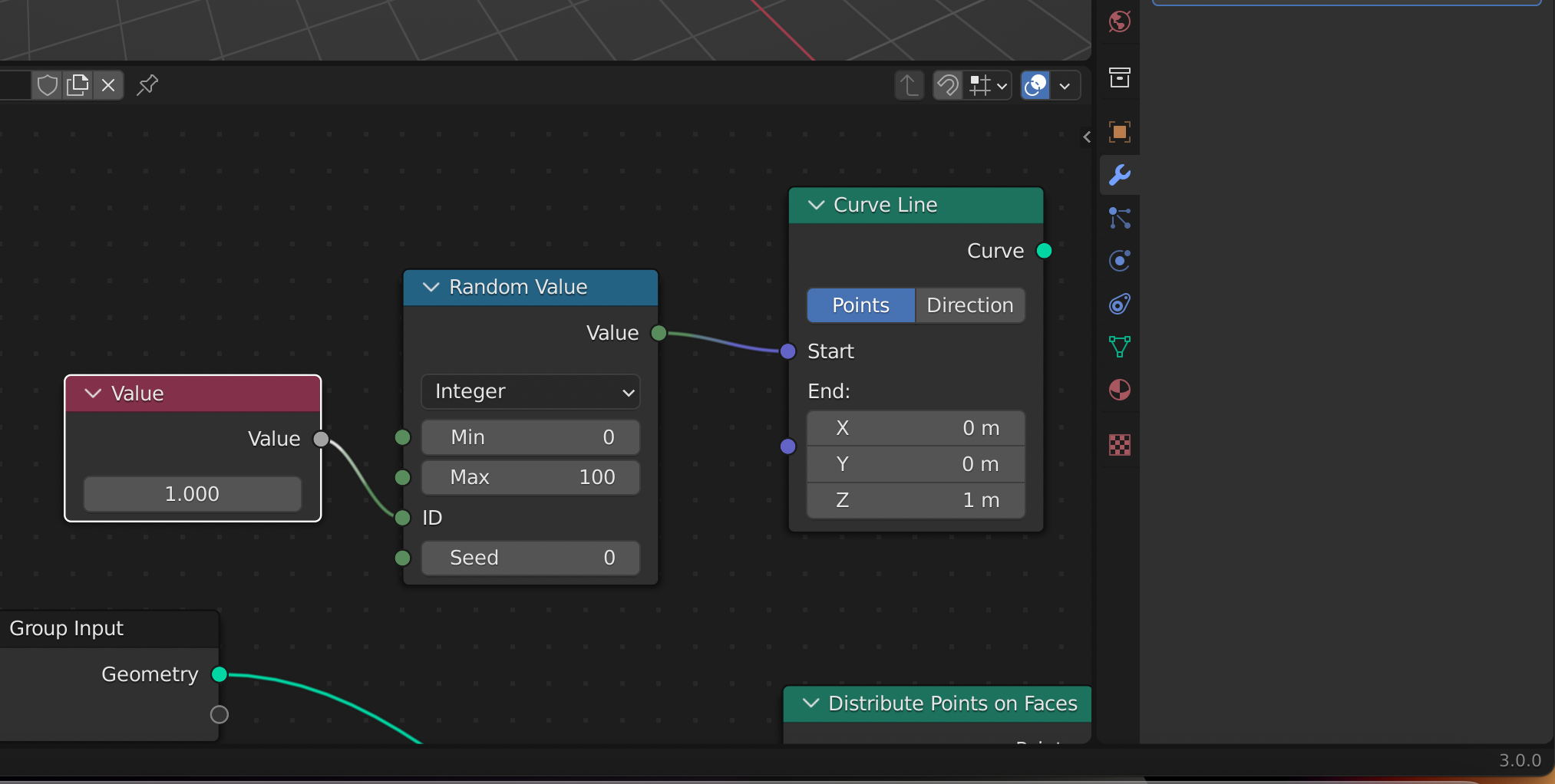 I think @Chris gave a good answer to help solve your problem. I think the main reason why the output wire turned red was that the input expected a single value while the Random Value node produced a list of values.

This answer is not meant as a solution (see Chris' answer), it's something for your understanding of the ID and Seed sockets of the Random Value node. By the way, I'll use the term ID, but if no IDs were assigned these nodes use the Index.

Let's say you have a geometry consisting of 4 points. They have the IDs 0, 1, 2, 3. The Random Value node now creates for example random float values depending on the Seed. Now imagine each ID gets an own random float assigned, e.g.

To change the rassigned values you can change the Seed value. As long as the Seed isn't changed, each ID has stable random value, i.e. each value is firmly assigned to the ID.

If you now plug an ID node into the ID socket of the Random Value node, nothing changes. Because it only tells the node, give these IDs from 0 to 3 random values based on the seed.

However, if you would now plug an integer into the ID socket - for example, 2, then the assigned values would be random based on the seed and the ID:

Now that doesn't look random, since they are all the same - but it is the random value that was given to the ID chosen by the value in the ID socket. To get a different random value to all points, you could switch to another ID. Or change the Seed. Or both. You can even enter values higher than the actual number of IDs.

This can for example be used with the Random Value node set to Vector and plugged into a Rotation socket: maybe you have many points, and want them all to be rotated randomly - but all the same random rotation. You could also animate the ID value and so jump between different random values but they are still the same for every point.

13
Why is there a red line when I try to connect one node to another?
2
Geometry Nodes Random Value doesn't output a Vector...?
2
How to connect the Round node to the count socket in the Mesh Line node?
0
Input for size of Cube node
6
Randomizing values in Blender 3.0 Geometry Nodes
4
How can I change binary numbers from from top to bottom?
2
Geometry Nodes & Viewer node : how can I debug a value?
0
Why is the Random Value node output not accepted by the Cube node?