The problem is I'm trying to limit the y rotation of the top bone in an ik chain to 0.

By the way, I'm not using a pole target.

When I posed ik handler, then applied the visual transform to the bone, I noticed the y rotation of the bone ignored the constraint.

As you can see in the picture below ik constraint tab is doing nothing. 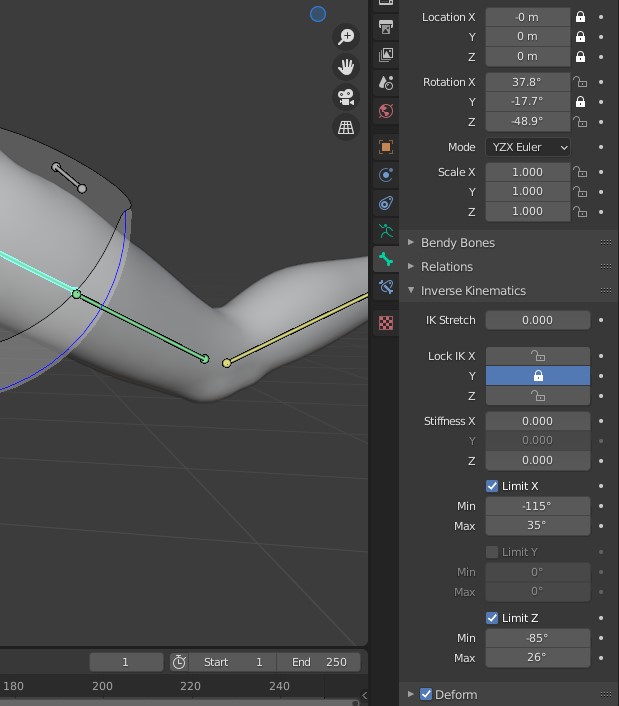 Now, here come the weird part, I noticed that if I change the rotation mode to quaternion, the bone y component is always 0, as you can in the picture below. 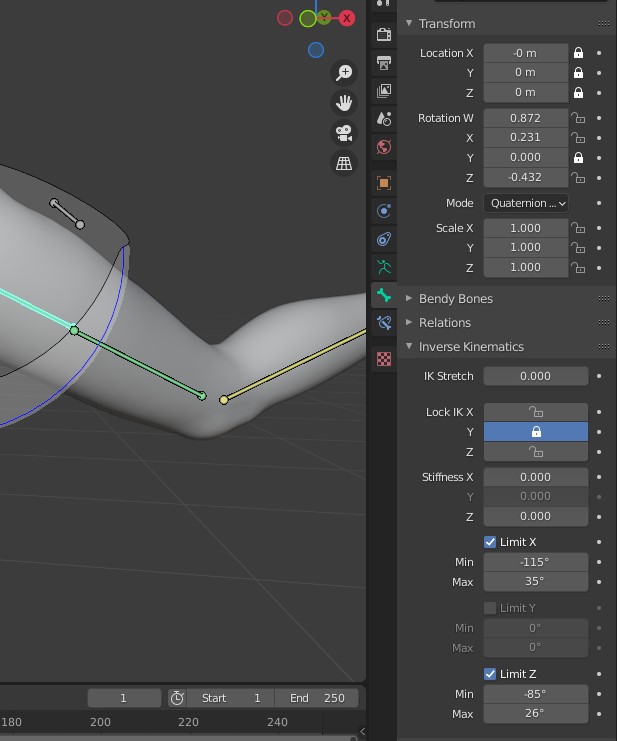 You can replicate this fairly easily, just create 4 bones, change the rotation mode to yzx, remove the parent from the last bone and make it the ik handler, no pull target.

So I have two questions:

Does the ik rotation constraints only work in quaternion ?

I also tried all the other Euler Modes, the problem is still there

I gave a poor answer earlier. I was thinking of a different situation. I apologize.

But the main issue here, with the precise locks and limits you're using, is that 3D angles aren't decomposable into 3 independent axes.

The easiest example of this is to consider two different XYZ Euler triplets: either rotate in x by 180 degrees; or rotate in Y then Z 180 degrees each. This is the exact same orientation. So when we look at this orientation, does it have Y axis rotation? When we lock an IK bone in Y, should this be an orientation it should be able to reach? 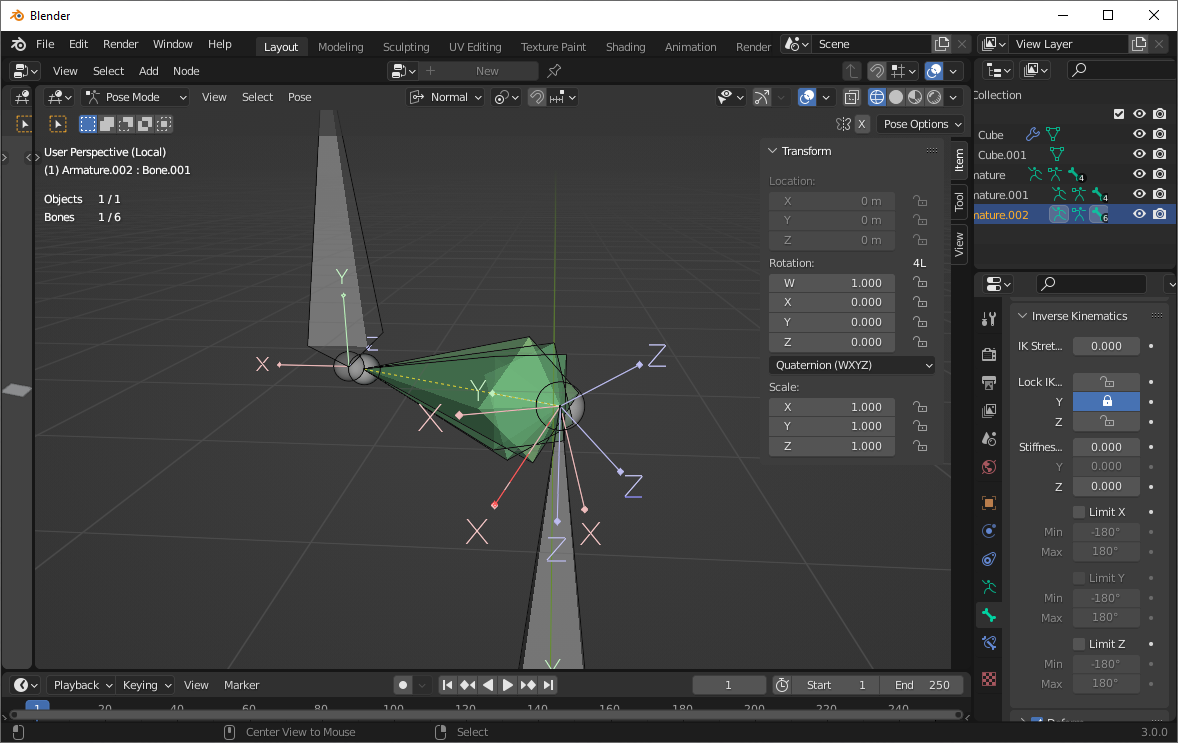 We can only see three bones there-- that's because the Y-locked IK bone has the exact same orientation as the damped tracking bone. Meanwhile, the two locked track bones' axes point completely different directions. The IK bone and the damped track bones' "roll" are in the middle of our two locked track orientations. That's how a Y-only locked IK bone acts; and this is indeed the smartest way it could act. The concept of bone twist is not as intuitive as it first seems, because it is not independent of other rotation, but this is the closest we can get to the idea of no-twist.

Now, what you're showing here is an upper arm, with an upper arm twist bone, and an IK forearm, presumably with a 3-bone chain length. There is likely one of two practical questions here that you want answered: 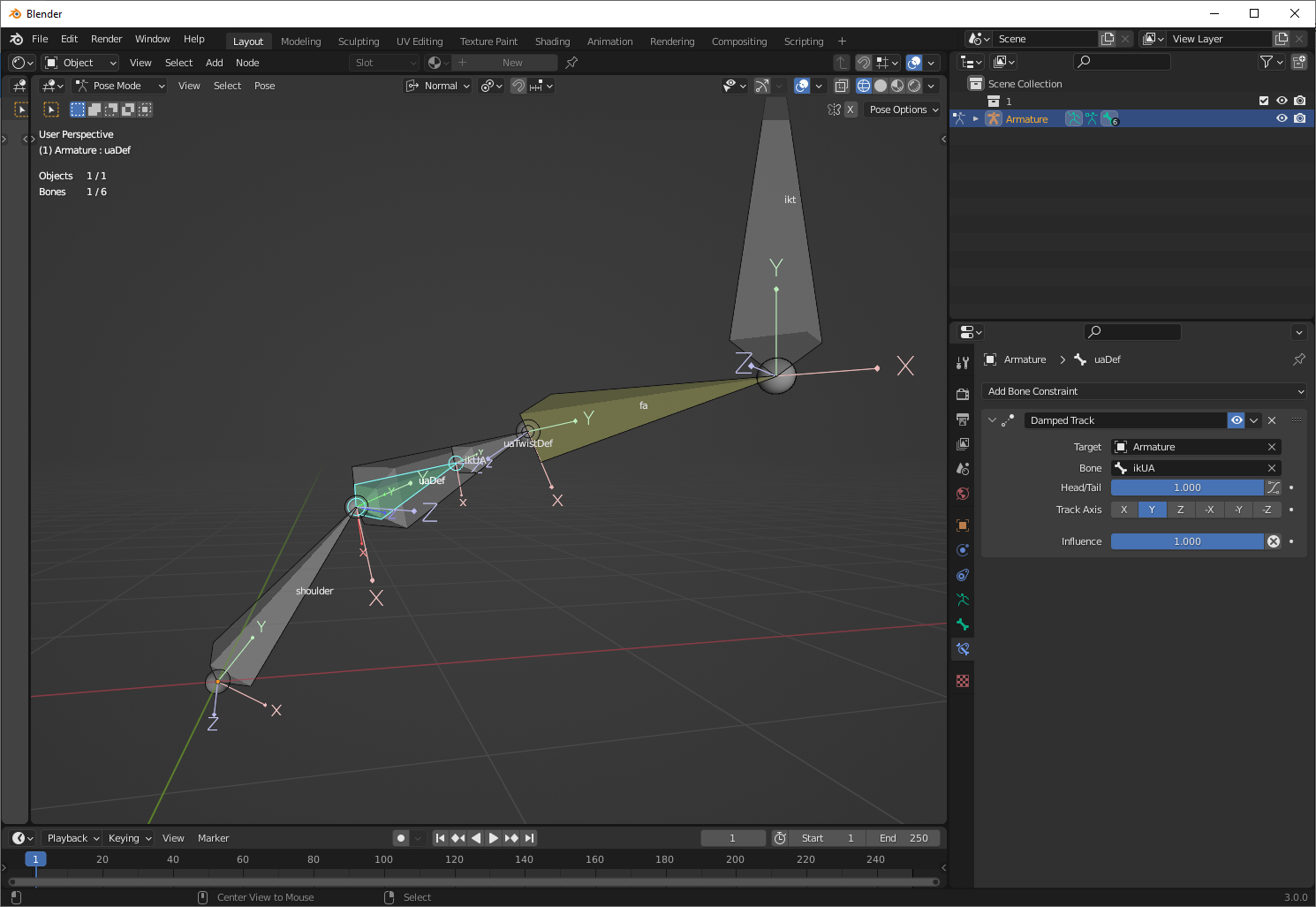 EDIT : or a simpler way would be to make a two bones ik chain 'upper arm' and 'forearm' ,make the two FK bend bones copy the X and Z ,and the two FK twist bone copy the Y

The rotation copy constraint should be in local space.

If the bones are not moving naturally or look too stiff, play around with the stiffness value of rotation in the inverse kinematic tab for each bones.

Make sure to untick the deform option for the duplicate bones and to tick Only Deform Bones in the export options if you want to export the animation.

Not the answer you're looking for? Browse other questions tagged rigging armature constraints inverse-kinematics or ask your own question.