How to shift noise texture without distortion?

I am struggling with understanding how to shift the noise texture connected to another noise texture without distorting the overall shape. I have tried connecting them to same mapping, and to separate mappings and shifting x coordinate around, but so far the results are not as I expected. I have attached an image below illustrating what happens in each case. 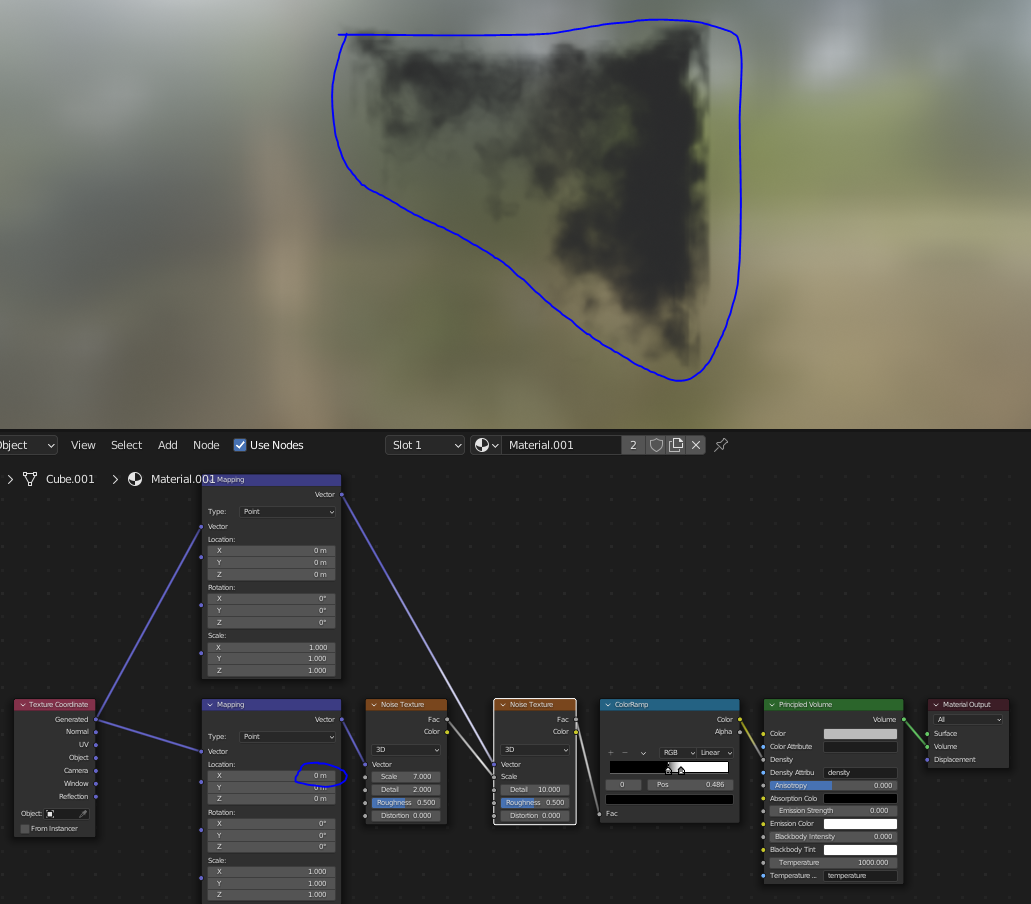 This image does not have any mapping changes. Below I show what happens if I change the mapping of a lower node: 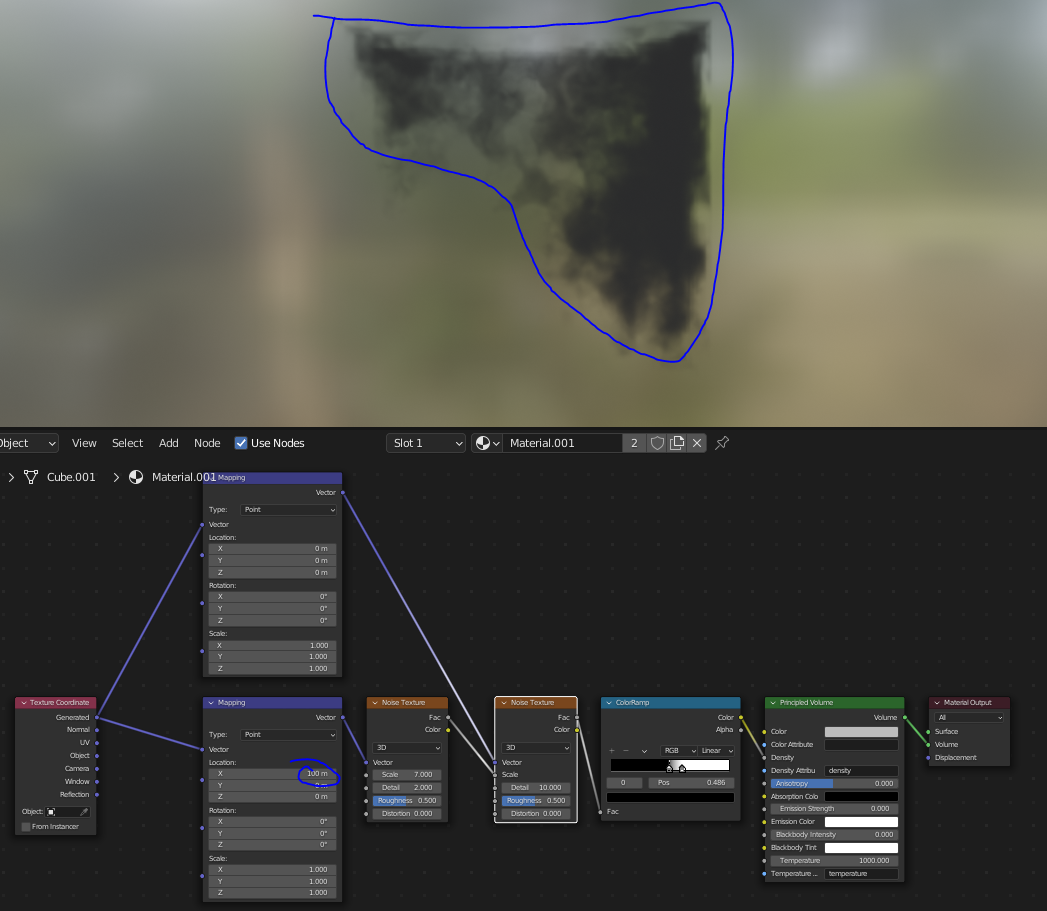 As it can be seen, there are no changes in the bigger pattern of the cloud, but smaller details change. Next, I show what happens if you change mapping of higher node: 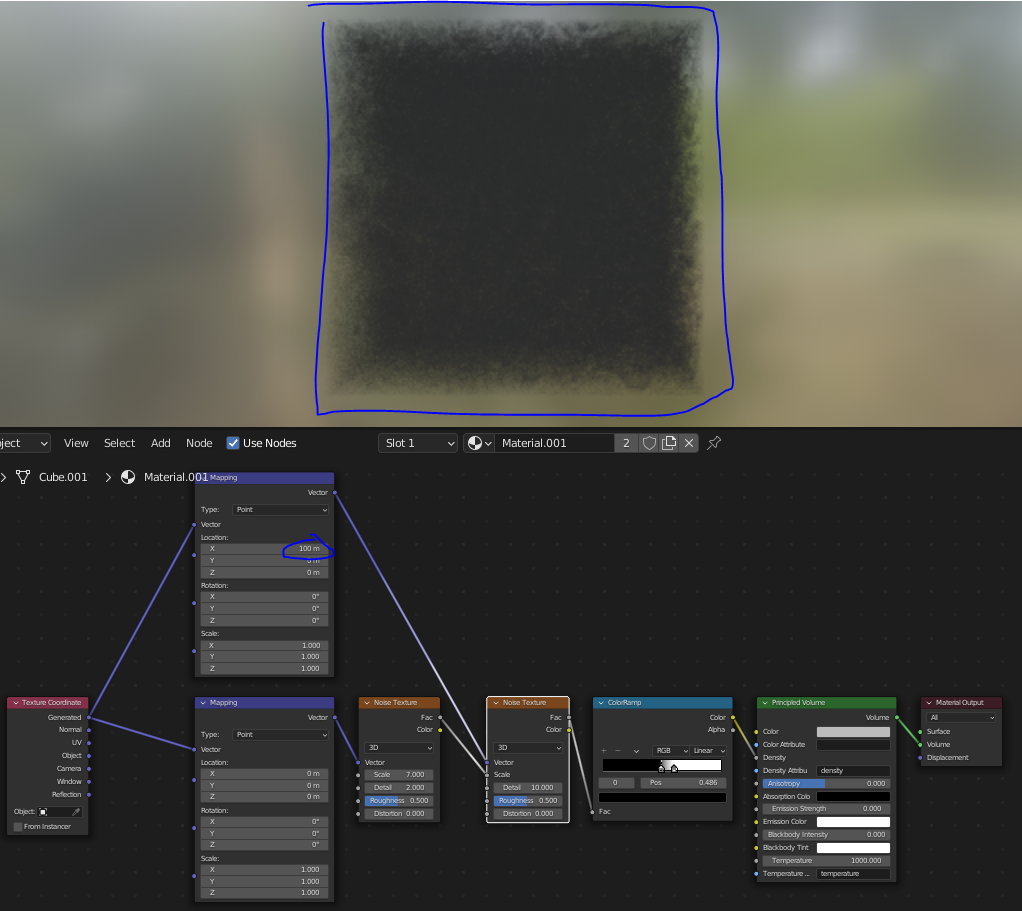 The result is similar to the one if you connect one mapping to both noises. In a nutshell, I would like to shift the "bigger" pattern of the cloud, not only the smaller details. How shall I proceed?

It seems to me strange to use Noise texture as a Scale value for Noise texture ... probably this mismatch the result. If you disconnect lower Noise to Scale you can see X shifting works OK so issue is definitely Scale source value. Try something like this ...

I replaced your Mapping nodes with Vector Math > Add as it achieves the same thing. Now, let's look what happens when you offset the Y coordinate passed to the 2nd noise texture, with the first noise removed:

Not surprising at all...

It no longer moves, it squeezes! Why? Because the noise texture isn't generated by first moving to a given location, and then generating some noise there, with the size of pockets of similar color based on Scale - no, instead it simply multiplies the given coordinate by the scale, and then generates noise for that coordinate:

This is why setting Scale to 0 will output a solid color everywhere, because each coordinate will be multiplied with 0, resulting with x:0, y:0, z:0, and so only a single noise coordinate will be sampled for all pixels/lightrays.

Going back to the example where the Scale depends on Y coordinate: at the bottom Y=0, and so bottom color doesn't change at all; at the top Y=1, and so the color changes as with Scale = 1. The lower on the plane, the smaller the scale and so the lower the multiplicand of the coordinate, and so the lower the offset, and so the lower of the moving texture speed... In simpler words (not sure if they're needed), if you have a traffic jam with 100 cars, and you magically make the cars move with speeds based on each car's bumper's distance to the front car's bumper, the front car won't move at all, the last car will move the fastest, and they will all squeeze tragically killing everyone inside (don't try to imagine the horror).

But how do you fix that? Right, ummm... I know! Do that thing vklidu said.

Not the answer you're looking for? Browse other questions tagged node-editor shaders volumetrics shader-nodes or ask your own question.

1
Volume scatter without rendering the volume object
24
Randomly populating procedural shape (or Image Texture) in Cycles
1
Principled Volume not showing up in Cycles Render
1
How does the Attribute Sample Texture node work?? I'm a beginner at Geometry Nodes
1
How can I add the noise to the pores in this texture?
0
Can't connect noise texture node in "Shading"
6
How to create this procedural texture without using Noise Texture?