Get user-friendly name for F-Curve

I'm trying to get the user-friendly name of an F-Curve that gets displayed in the Dope Sheet and Graph Editor. For example, I would like to get the name 'X Euler Rotation'. 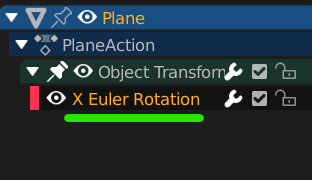 If I use FCurve.data_path, I just get rotation_euler (which isn't describing the F-Curve's X dimension).

F-Curves that are part of transforms come in sets of three or four. Internal code relies on their array_index value to generate the axis name, or "W" in case of Quaternions. Other F-Curves also don't have a friendly name and internal code translates the name to display names.

The following code needs tidying up to put into an actual application, but consider it more or less pseudo-code. It's roughly how the internal code generates the names. It doesn't include the translation from internal name to pretty name.

This is just an example, run on an object that has been translated and rotated using a quaternion rotation, but not scaled. It has also been hidden in renders:

For the example I described it prints

Here's my attempt. I didn't test it extensively, and it won't match everything. But it matches what I tried.

Call nice_fcurve_name(target, fc). fc is the fcurve, target is the thing the action is applied to (eg. an object, a node_tree, a mesh.shape_keys, etc).

Not the answer you're looking for? Browse other questions tagged python scripting graph-editor fcurves actions or ask your own question.

1
How to get name of image corresponding to active paint slot?
11
Set Active FCurve in Graph Editor through python
0
How can I find an specific F-Curve given an action name?
0
Restore Graph Editor F-Curve Filter Location
0
Selecting a curve by its name with a Python script
1
Get frame to frame object location Blender 2.81 +
1
Graph Editor - Active curve name?
4
Get the object of an FCurve