I rather try to explain what I want to achieve.

The cubes (later smaller objects) on the conveyor belt are supposed to be affected by the nozzles at the end and be separated depending on their weight later on.

How can I make the force field so "thin" so that the force is only applied once the cube reaches the "line of fire" (orange)?

I tried to scale down the y-scale to 0 and set some maximum radial and maximum falloff, but my cube keeps moving in the same direction above the edge now, like the conveyor belt is endless. Furthermore, if the cube is outside the outer force field sphere lines, then it cannot even enter it. I thought the maximum falloff is limiting its size, but apparently it doesn't.

Here are my force field settings which is seen in the previous picture: 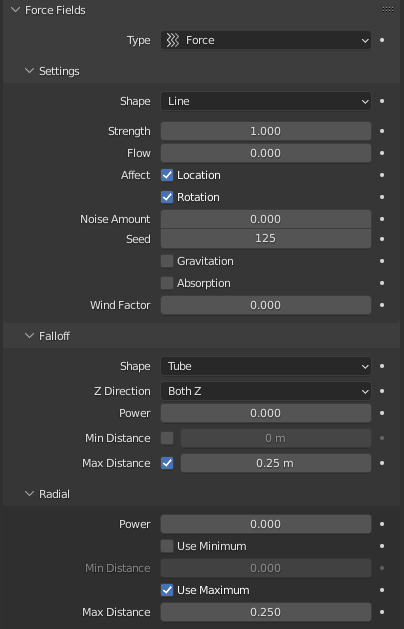 I noticed that force fields only affect objects whose origins are inside the force fields shape. Sadly Blender doesn't check if an object has crossed a force field between two frames. So a force field plane would not work, since it is practically impossible to have a origin of a moving rigid body perfectly alligned with a plane.