I am in the final phase of my project. I want to do animation using model imported from MakeHuman. I remark in the properties of the model there is two mode FK (forward kinematic) (default mode) and IK (inverse Kinematic) to move our model. What is the difference between both modes. I could use easily the FK mode but in the IK mode some lines are added (see figure 2)and when I try to move it in order to move leg or arms of a person, i get nothing!! 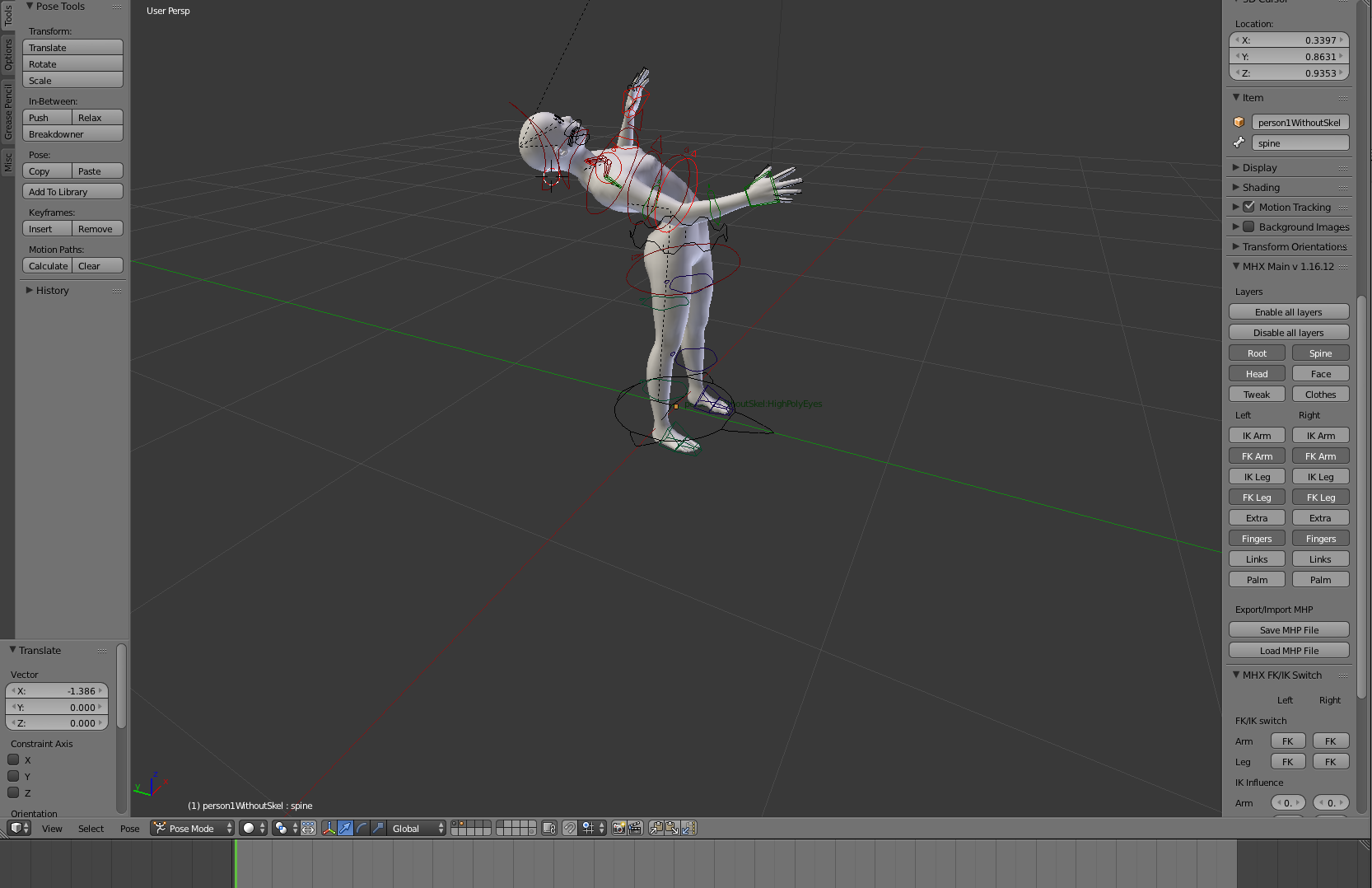 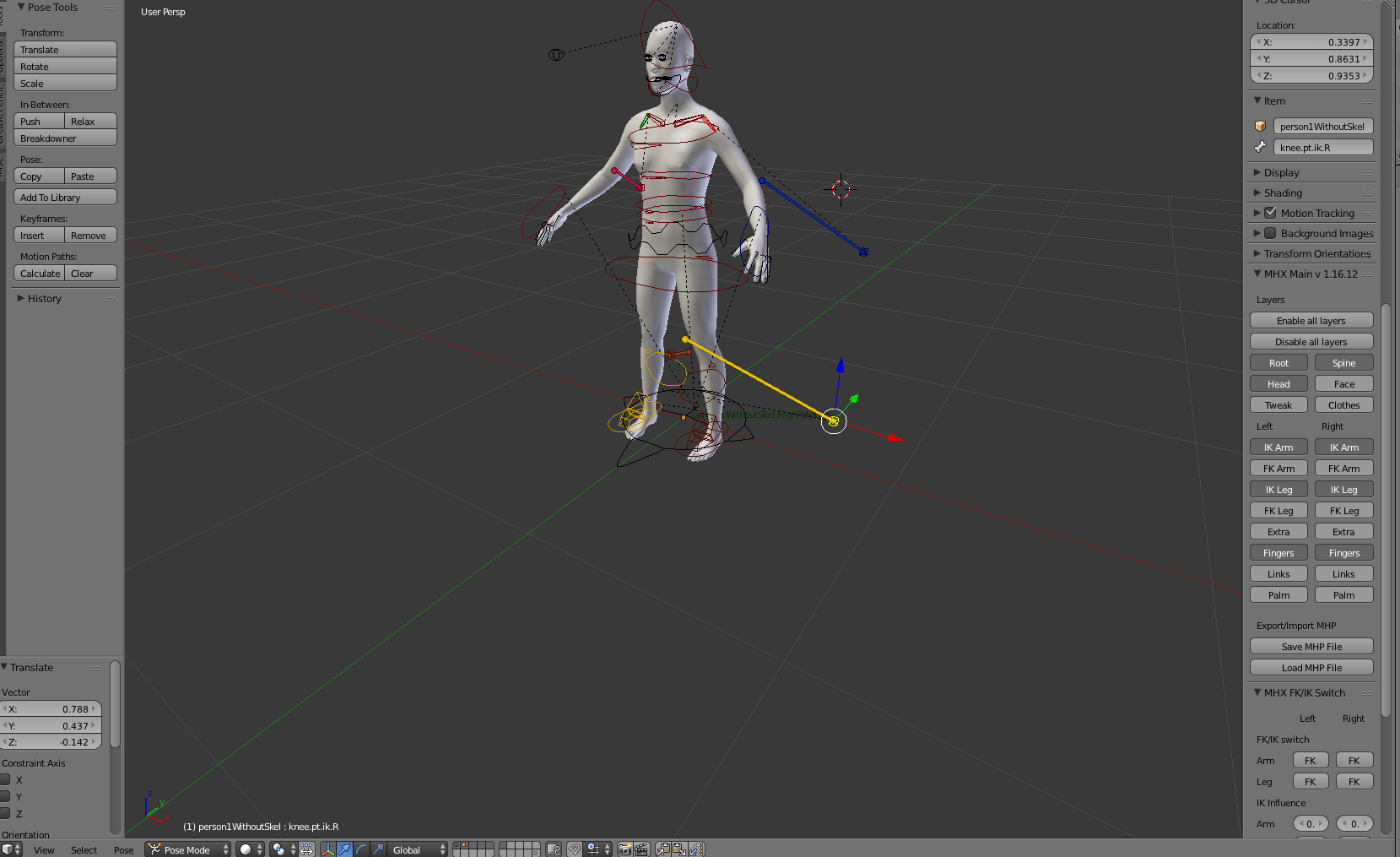 With inverse kinematics (IK) the hands and feet will keep their position when the body is moved. When you switch from FK to IK you need to enable the layers for IK also.

FK and IK have different control bones (custom shapes) for both modes. With IK you control the pose with the large plate shaped widgets at the hands and feet.

The lines you see are pole targets and allow to control the position of the knee or elbow.

With forward kinematics (FK) each bone from shoulder to wrist needs to be adjusted. This is exactly how bones can be moved right after creation.

Movement with arms still set to IK but leg to FK

Rigs like Makehuman or MHX allow you to switch from IK to FK separately for the legs and arms. You can even control the influence of the FK/IK controls. 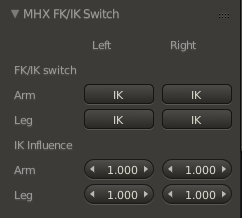 The snap buttons allow copying from the IK position to FK and vice versa. 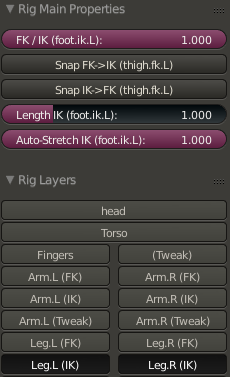 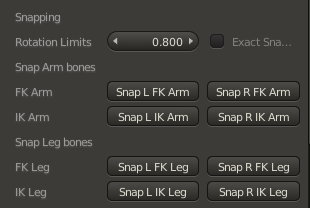 If you get nothing that is no motion when you move the arm or leg IK .. Go to user preferences and check "Autorun Scripts". That should work.

What is Forward Kinematics?

With Inverse Kinematics, you do not need to define the whole pose of an articulated body — this gets calculated for your by the IK algorithm. With IK, you only need to define a position as the input.

Inverse Kinematics does all the challenging computational work of calculating what the pose is. In the Before State, there is an articulated body with some known pose. It defines a target position for the end effector to try to reach. Once the IK algorithm is applied to the articulated body, we have reached the After State. The After State shows that a new pose has been computed, such that the end effector is now at the target position.

Not the answer you're looking for? Browse other questions tagged cycles-render-engine animation blender-internal-render-engine makehuman or ask your own question.

0
Armature not bending with connected bones

1
Texture Node in the cycle render
3
What is the difference between blender render and blender game?
2
How to move the master bone of a rig to the actual pose?
1
MakeHuman Inverse Kinematics
2
How to switch to Inverse Kinematic for Make Human model in blender 2.78?
4
Motion Capture T-pose Bent At Hips
3
How do you allow inertia in bones for animating in pose mode?
1
Parts of my mesh won't move with the rig