How to make multiple speed changes in a video

I'm using the video sequence editor to try to edit a ~2 hour video into something much shorter. I want to have a high speed multiplier during uneventful parts of the video, slow down to real time during interesting parts, and then go back to a high multiplier again. Eventually I'm going to want to add text, but one step at a time. I'm having a really hard time understanding how Blender works for speed changes.

The start of my video I'm keeping real time, and then I split the strip at the point I want to change playback speed. In the new part, I add a speed control effect, and set the multiple to the value I like: 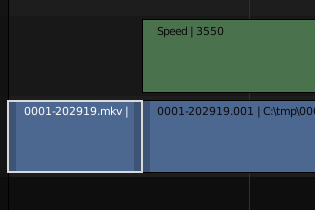 Then, I use the sequence editor to find the next place I want to change the playback speed, I split the strip again, and then delete the speed control on the new part of the video: 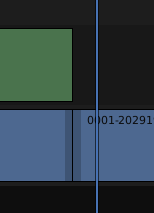 However, this 3rd strip goes back in time to where the video would have been if it was playing real-time throughout. It doesn't take into account that part of the video was being played at a speed multiple. 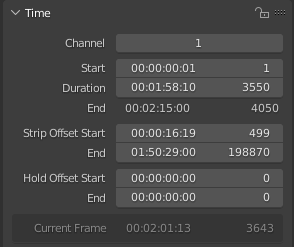 Even if I do the math myself, and calculate the exact frame number, I haven't yet been able to figure out how to get the 3rd video strip, the one that goes back to real-time after the speed up ends, to start at my calculated frame number. I think I understand "start/stop" in the sequence editor, but I don't understand "strip offset start/end" and "hold offset start/end", or what values I should enter to have my video appear uncut, just the playback speed adjusted.

How can I edit my video so that I can change the playback speed multiple times, without having any 'cuts' in the original video?

I'm brand new to Blender, and video editing, and I didn't know there was a difference between "hard cut" and "soft cut". Only the soft cut is available when I right click the clip in the sequence editor, but I see hold cut in the menu. Anyway, trying Chris' suggestion from his answer, I still have the same problem, but now the part of the video that is sped up doesn't work as I intended either.

See how before the split the video was at 5:33, but after the cut it was just at 0:52. Going back to the clip that has the speed control, now only the first 1/8th of the clip actually animates, the last 7/8ths holds the last frame for the full duration.

Here is how can do it:

first place the cursor at that frame where you want to change the speed. 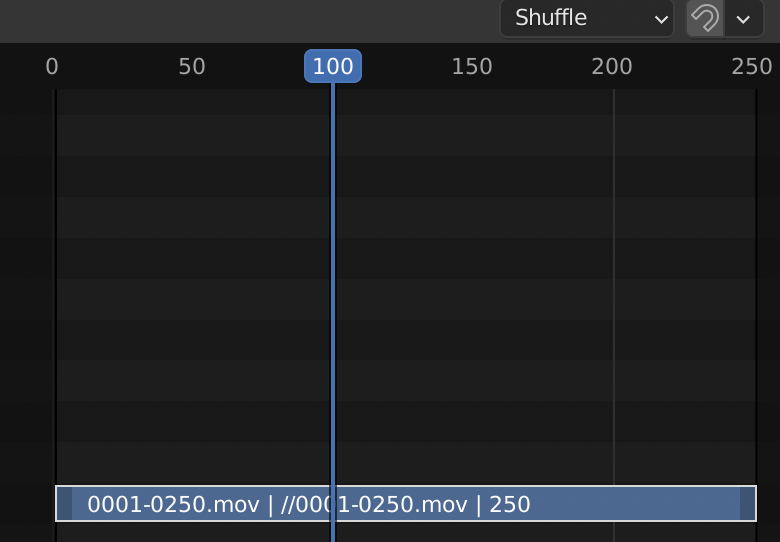 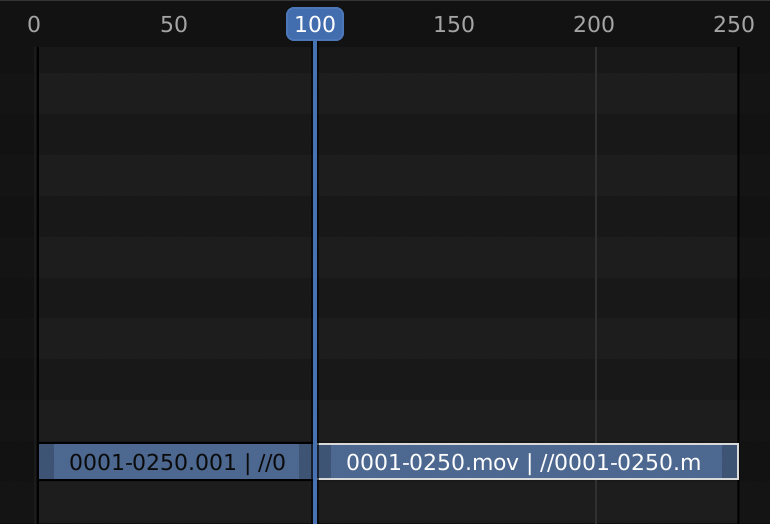 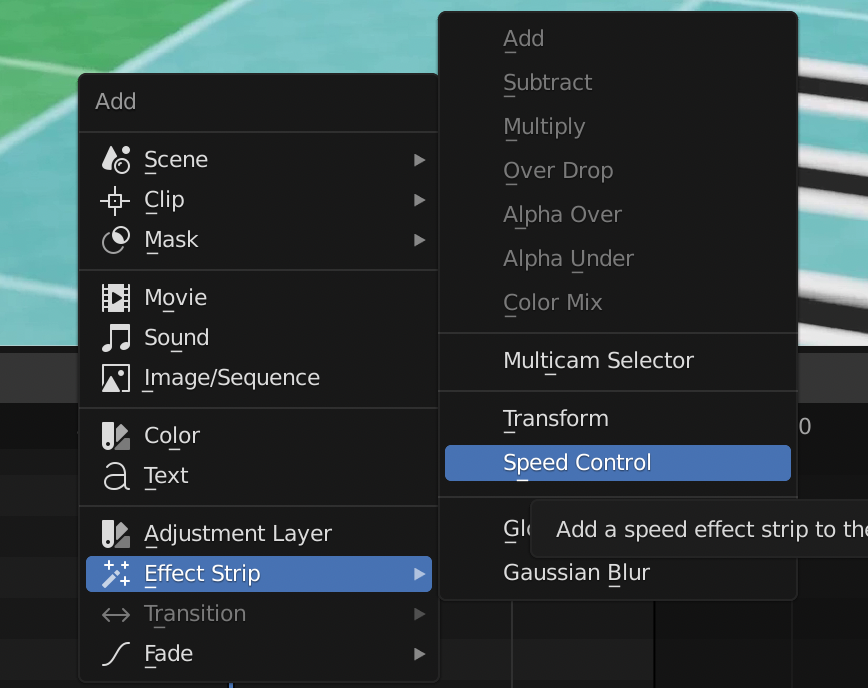 now you can drag the right slider where you want to 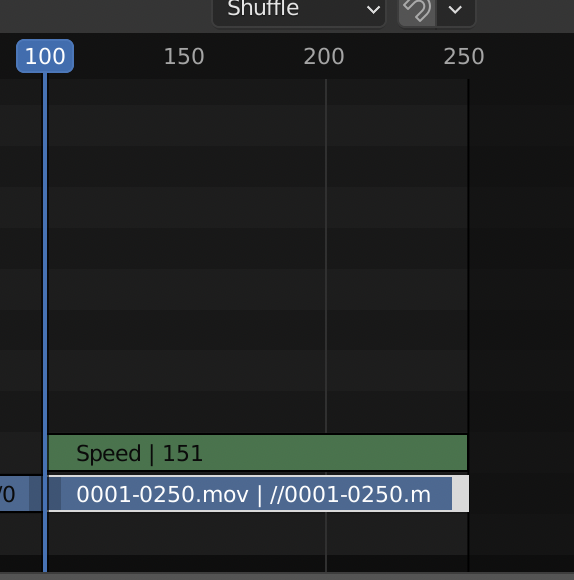 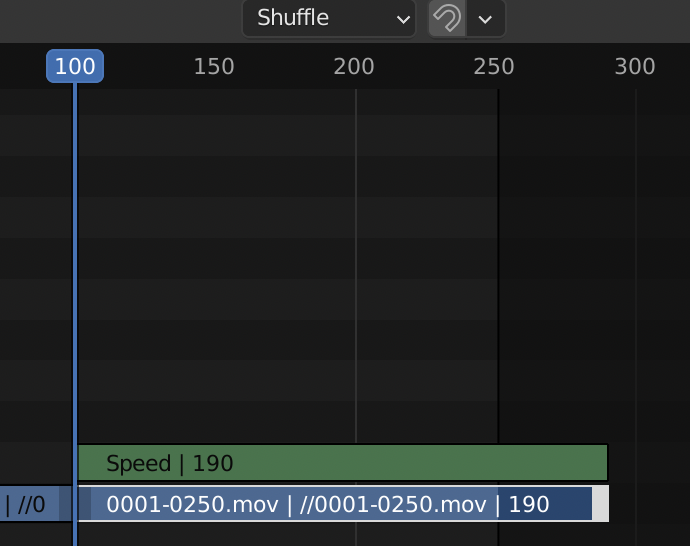 if you have gaps somewhere, place the cursor on frame 1 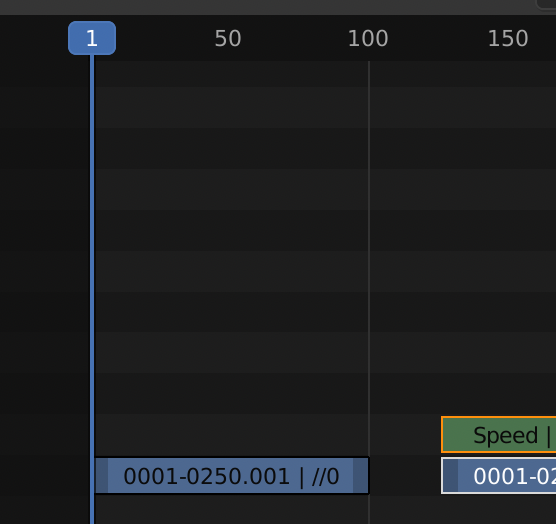 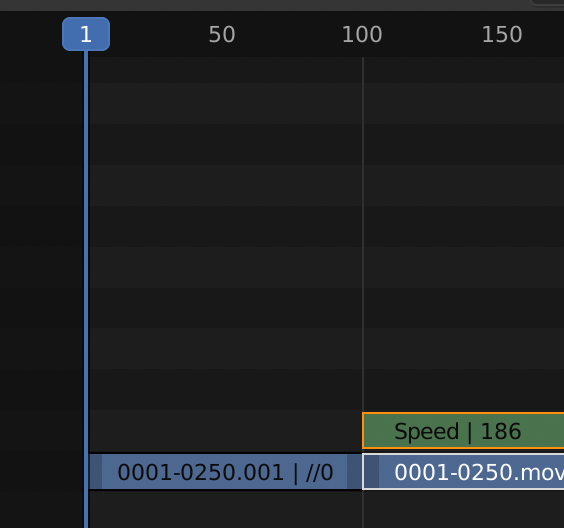 if you have more gaps, press backspace again and again.

Importing variable bitrate mp4's can make maintaining sound sync somewhat more challenging , so a conversion to lossless .AVI and using that in the VSE can be a good idea.

It would probably help to set all imported strips to --> "Replace" <--- in the properties at top right. (press N)

---> NEVER EVER <--- move a video strip without it's accompanying sound. Once separated it can be - goodbye synch.

Don't forget to switch on the AV synch in the VSE's window header.

Import the movie strip into the lowest strip channel. It may help to set it to "Replace" in it's properties at right. (at the top)

At the frame where Fast Forward (FF) is to commence, do a SH-K to cut BOTH strips. (sound and video)

Move forward to the point where speed is to return to normal. Do another SH-K there. (both strips)

Select both Sound and Video (separated at right) and drag them both to a higher channel and well to the right and out of the way, with G. (no mouse button required

Go back to the section that's to be sped-up and delete it's sound strip.

Select the (video) strip that's to be sped up and add an Effects Strip --> 'Speed Control' to that.
Press N to see it's properties at right and type in the speed required. (for lengthy FF, a setting of 8.0 is a good one to try)

Untick the "Stretch to Input Length" box and check the "Use as Speed" box is ticked. 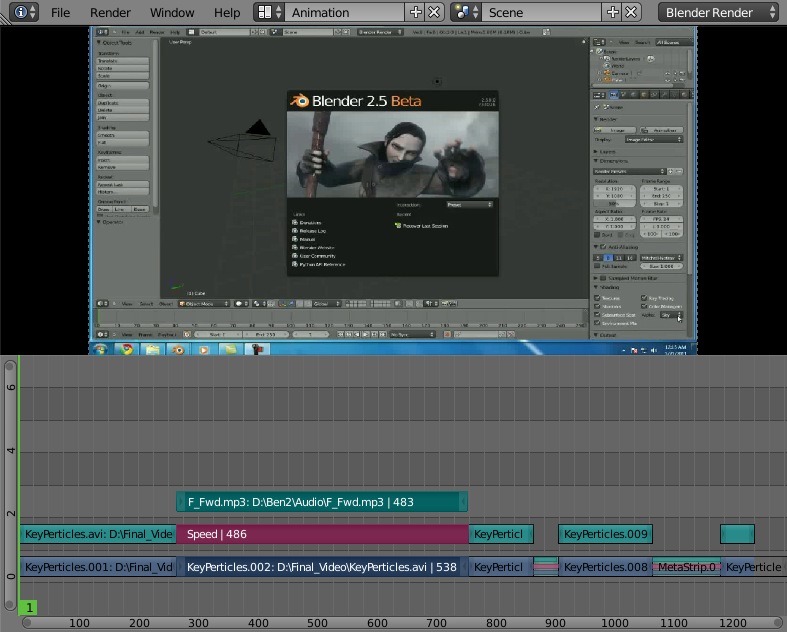 When played it will Fast-Fwd and eventually resume normal speed again or freeze.

(You can check the cut away section (moved out of the way previously) to see what's there at it's start. It will probably be at the same point as the FF strip's return to normal speed)

Move the timeline cursor to where the sped-up video strip resumes normal speed or freezes.

Select that video strip and drag it's right-hand end-handle, (small triangle) and drag that back to where the timeline cursor is.

Play it again to check it's doing what it's supposed to.

If desired, a 'Whiz-by' sound effect can be added to accompany the Fast Forward strip. Do a SH-K (hard cut) on that to match the speed control's strip-length.
Move the separated trailing section to the right and well out of the way.

Select all 3 sped-up strips - Video, Speed Control, & sound effect and press CTL-G to condense them into a single Meta-strip. (play it again to check?) (Use ALT-G to restore)

Select the previously moved original video & audio 'strips and drag them back to join up with the end of the sped-up meta strip.

That completes the process. Repeat the above for further Fast-Forwarding...

The VSE has a habit of acting up when changes are made, so before rendering and possibly earlier, save the project, exit, and reload a few seconds later. (give the computer's delayed disc-updating, time to catch up)

Play the entire sequence through before rendering. (a precautionary step which may not be necessary)

Speeding up the sound for Whiz-by SE -

Fire up a new instance of Blender.

Import an audio or video file. Go to the 3D viewport and in the rendering panel's 'Dimensions' tab, set the output frame rate to 1 fps, dimensions to 600 x 400 (?)

In the render panel, set the output's audio to mp3 (?)

Set the pitch to 4 or higher.

3
Video Speed Changes when rendering
4
How the speed it up a portion of a video, and also all of it?
0
Video Editing, Is there a way to make the speed value animated?
3
VSE: How do I speed up playback in the video preview?
1
Shorten video with speed control effect strip already applied
0
Cutting a speed-adjusted clip distorts audio/video alignment in Video Editor
1
Split and delete a video clip, speeding up undeleted clip keeps deleted section