Rescaling a baked F-curve to values between 0 and 1

I've partially solved this by using some external programs.

First I edited the audio in Audacity, to get a curve shape I was happy with. I won't go in to the detailed workflow, as this would be beyond the scope of this site. What I did was basically applying a series of compression, normalization and amplification filters.

Secondly I resampled the audio to 32-bit floating point, as it seems Blender doesn't correctly map 16-bit integers to values between 0 and 1. For this I used SoX.

(I could do both with either program, but I find SoX to be better at resampling and Audacity more intuitive, as I can see the changes directly affecting the shape of the curve).

Then, in Blender, I created an object (in this case an icosphere) and added a keyframe (in this case to the Z location) at frame 1.
Then, in the graph editor, Key > Bake Sound to F-curves 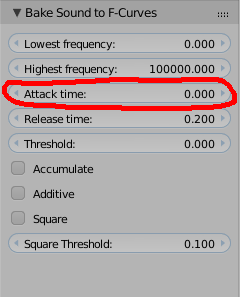 Here's what I got

I'm afraid that the accepted answer to this question, while feasible, is a long and hard-to-tweak workaround. Also, a similar (later) question has a good answer here. To summarize what's there, and what I've read elsewhere, there are three options:

5
How to increase the strength of a baked fcurve?
2
Combine F-Curve Modifiers with baked Sound
0
How can I automate a audio file to transformations?