I've got a Macbook Pro Retina, Mid 2014, and I'm trying to get GPU rendering to work on it.

I've downloaded Cuda, the GPU shows up in user preferences, and I've selected GPU Compute under the render settings. I've ran the BMW benchmark on both my CPU and GPU.

It takes about 4 minutes 25 seconds using my CPU, and 7 minutes 39 seconds on my GPU. I've downlaoded iStat Menus, and check my CPU/GPU usage during the render. The GPU is being used, but the memory usage is a tiny fraction of it's total memory. I have a 750m graphics card, which should be substantially faster than the CPU.

Why isn't the GPU rendering faster than the CPU? 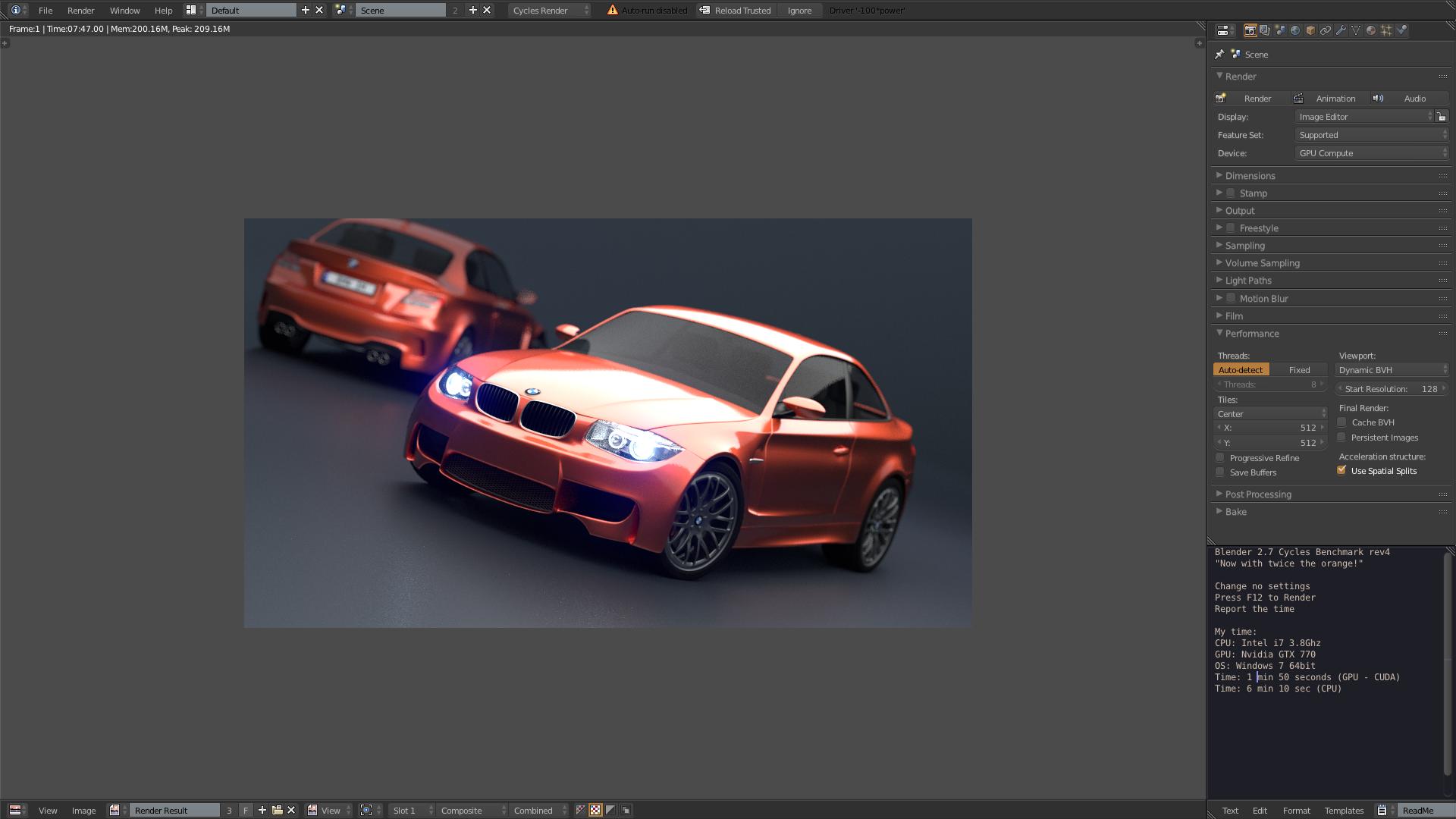 I'm not sure if you really have any problem here.

GPU programming is one of my favourite topic in computer science so I will try to keep it simple. Actually CPU is A LOT faster than a GPU for one computation (it's like comparing a smartphone with a desktop CPU, really) and GPU love making all at same time (that why you can use Shift+Z in cycle). Basically if computations are not dependant between them GPU win. -> So usually the problem is more you have dependency between computations slower it will be on the GPU.

What I think for your benchmark:

You use some shader/material/effect that make dependency between computation or make the GPU wait for some synchronisation and make you GPU render less efficient...

So blender has some optimisation problem ? No, if GPUs were just more efficient than CPU what is the point of keeping CPU ? No it's just a trade, you just have to know what you want to do with your scene (render optimisation you know...). Btw that's why blender keep CPU rendring... The GPU is really better when you want real time using a lot a tricks that use parallelism a lot. that's also why a PS4 has 1.6 GHz but with 8 cores (for parallelism again) but that's an other story

-> You really have to keep in mind I just THINK this is the problem I don't have your scene to deeply test it or trying track which effect/shader/material take time.

Even if what I said is true I said also "I just THINK this is the problem" and in fact I've just tested your scene and checked this thread: http://blenderartists.org/forum/showthread.php?239480-2-7x-Cycles-benchmark-%28Updated-BMW%29

which is a pretty huge gap... So now look at the thread, for OSX you have 2 type or person:

So the scene is obviously GPU optimised and what I said before is not the real problem here. The thing you have to know is OSX has a lot of problem with his graphics drivers (for exemple if you try openGL you are stuck with openGL 3.3). From here what I think is your render time difference is due to Apple's drivers. I don't work for blender or Apple so I am not 100% sure but from I see here the problem seems obviously coming from Apple. To be really sure I will make some test on the Mac of my room-mate soon.

PS: I'm really surprised the graphics driver from Apple was that bad, I thought it was just "bad" not "really bad"

He a little explanation about GPU vs CPU rendering in Blender:

GPUs are generally faster than CPUs, if you spend the same amount of money for them, so if you spend 500 dollars on a GPU and on a CPU, the GPU will be several times faster in rendering.

CPUs are made to run code, not to crunch numbers. They CAN, but they are more inefficient doing it. GPUs on the other hand (using OpenCL from AMD and such and CUDA / Optix (proprietary to Nvidia) can't run normal app code, but are perfectly suited for number crunching. That is for tasks that can be massively parallelized, as GPUs have thousands of tiny little cores (Nvidia calls them CUDA cores on their GPUs).

If you consult Blender Benchmark, you will notice in order to match the performance of a Nvida RTX 3090 GPU that will nominally cost you around 700 dollars, you will need to spend several THOUSAND dollars for a CPU that can best that. (these prices are not accounting for the insane inflation of cost that Covid 19 has wrought on electronic components) 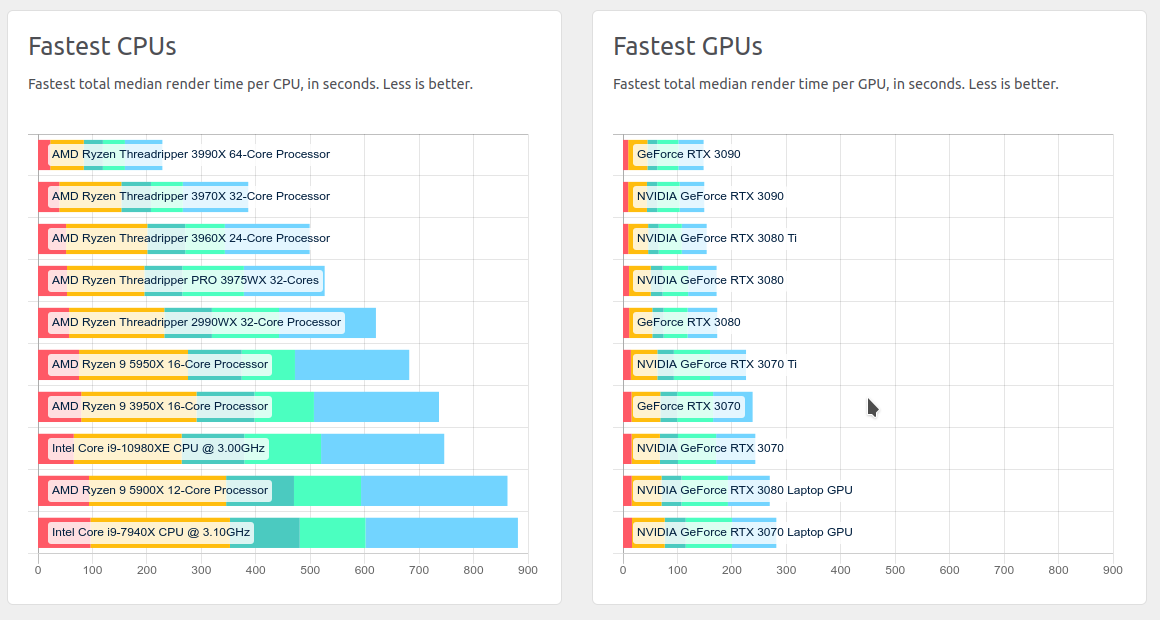 Now notice that even a 64 Core AMD Threadripper (a insanely powerful) CPU can't keep up with a Nvidia RTX 3090 GPU, while still costing a multiple of the GPU. Also note that Blender Benchmark is unbiased, it is a real life benchmark that uses Blender to just render scenes, it is the same as if you rendered these scenes yourself.

So you could say that CPUs and GPUs are just different, they both have specializations and best work together, CPUs for running code and general computing and GPUs for either displaying graphics or raw super fast number crunching of calculation loads that can be massively parallelized.

In Blender, if you want to render scenes really fast, you will need to go with a GPU, right now as of this writing (July 2021), looking at Blender Benchmark https://opendata.blender.org/ the GPU to buy would be a Nvidia RTX 3080 or 3090 or even 2 or 3 of them, since they can be used together. There is no CPU currently that can best this kind of raw calculation performance by for example 2 RTX GPUs.

It is also noteworthy that it seems that CUDA (which allows calculations to be done on the shader cores of the GPU, instead of using it to display game graphics) is now being replaced by the much faster OPTIX. It seems that the huge success of Nvidia cards in the render field was due to Nvidia highly optimizing CUDA and now OPTIX for this. Nvidia had an obvious incentive to do this since CUDA is proprietary and can only be used with Nvidia GPUs.

When using OPTIX on RTX cards, the new tensor cores can be utilized and sometimes the speed can be double of what CUDA would deliver on the same card, see this article here:

This might sound biased towards Nvidia, but it is actually just stating facts and AMD has made great leaps in the last GPU they released, closing the gap to CUDA performance, but not OPTIX performance yet, it is expected that they will use a faster replacement for OpenCL in the future, so we can all be hopeful for more competition in the market.

4
Why are there scenes that will not render on GPU but will render fine on CPU?
3
My CPU is still faster than my GPU
2
What can I do to speed up GPU rendering?
0
Blender 2.83 GPU render slows compared to CPU
0
Cycles Render - Rendering Time
1
GPU rendering is equal to or slower than CPU rendering
1
What would be the better hardware to use in cycles?