Why are there scenes that will not render on GPU but will render fine on CPU?

I've already tried GPU Rendering and it seem to be twice as fast as the CPU. However I have some situation where tried to render on the GPU, but it doesn't do anything. When I switch to CPU it renders.

I have some fur texture/materials using particle systems. I wonder if that causes the GPU not to render, I'm not really sure.

It all depends on the complexity of the scene, the size and number of textures used, and also on the kind of of GPU at your disposal.

GPU rendering can be faster than CPU on most modern graphics cards with lots of CUDA cores, but it is also limited by the amount of VRAM built on the card (usually not a lot). Once you've reached that limit, the rendering process will fail.

If there is only one GPU on your system, and the GPU is also being used to feed the monitor(s), even less VRAM will be available for rendering, as some of it will be already in use by open applications.

On systems with multiple GPUs the VRAM is not shared, and Blender will only use as much memory as in the smallest one of the card's.

When you render in CPU you can use all the RAM available in your system, and once you've reached the physical limit, the OS will start virtualizing memory by caching on disk. So for very complex scenes with big textures you might only be able to render on CPU.

A possible way to render complex scenes in GPU is to spit them in layers and combine them at the end (Read this link on blenderguru.com)

GPUs for laptops are in general not as powerful as the ones in desktops in terms of speed, number of CUDA cores or VRAM.

When it comes to older GPUs or with less CUDA cores, it is possible that CPU rendering might be faster. Specially if the CPU is multi-core (or multi-threaded).

To make rendering more efficient is important to find the size that works best for your machine. Sometimes larger sizes will render faster, but there are times when you need to keep them smaller for the machine to work efficiently.

Some operations in Cycles still only work on CPU (like smoke rendering).

Try updating your blender version. Some of the older versions before 2.73 did not support functions on the GPU that were supported on the CPU. Make sure you set your Feature Set to Experimental when rendering on the GPU to ensure everything is supported.

The major limiting factor for rendering on the GPU is texture size. If you have many textures, they can't all fit into VRAM (in their uncompressed versions)

You may also need to update the GPU driver to the latest version.

nVidia tends to upgrade the CUDA capabilities in nearly every new driver, it's not the ultimate solution but it could help.

If the scene requires Open Shading Language (for scripted custom shaders) the option disapears from the render settings when you switch to GPU. These shaders wouldn't work on GPU. 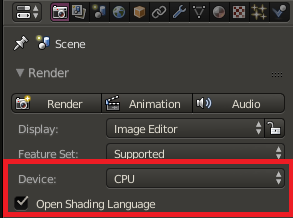 2
rendering problem (CUDA error out of memory)
0
CUDA Error: Out of Memory in cuArrayCreate(&handle, &desc)
13
GPU slower than CPU?
1
Unable to GPU render with Mac
1
Run blender on GPU is as low as CPU
0
Blender 2.83 GPU render slows compared to CPU
0
I have a CUDA error when rendering

18
Cycles Render not utilizing the GPU as it should
1
Why do I get a blank render with GPU?
0
In Cycles Preview (not rendering), GPU is 20 times faster than CPU, but only double in Rendering!
1
Fragments / light splotches in gpu render but not cpu render
1
Blocky, Incomplete Shadows with GPU but not CPU