Receiving a shadow without casting one?

I am trying to create a plane that will stop shadows that hit it, but will not cast a shadow itself. I am using Blender Internal and have tried a combination of "Receive", "Cast", "Shadows Only" and "Cast Only" to no avail.

Keeping "Receive" on but turning "Cast" off just allows shadows to pass through it.

In this image I'm trying to get 00 Caster to cast a shadow on 01 Blocker, and to have neither of them cast a shadow on 02 Receiver (which can receive shadows from other objects). Would Light Groups be a way of doing this? 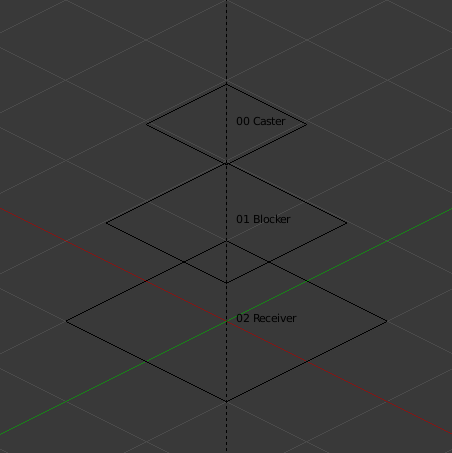 Here's a link to the blend.

I replicated your setup and I think the answer is simply that, no it is not possible.

The closest you might get in my opinion would be disabling shadows for CASTER and/or BLOCKER by unchecking traceable in material options. And it fakes the desired effect but won't hold true in general - it is not "shadow blocking"

Using light groups you can achieve a similar effect, in that you might have two similar lights, one affecting CASTING and BLOCKER (but not RECEIVER), the other exclusively lighting the receiver. But this is not shadow blocking either.

As far as I know, options to cast shadows without raytracing have been removed from Blender (no shadow maps anymore). I'm not sure what you might achieve with an older version (maybe pre-2.5x if my memory is correct). This is relevant to your problem in that, in raytracing shadows are simply a by product of not receiving light. So I'm not saying that it's impossible with raytracing, but they would have to implement "shadow blocking" as a specific feature for this to work.

6
How do I properly set up a spotlight cone?
15
Render shadows over a transparent background in cycles
1
Blender internal - pure white plane with shadows/gloss
5
Turn off HDRI shadow casting
3
Transparent object shaddows in volume material [Blender Internal]
0
Shadows in render are noisy
1
Prevent object from casting shadow in Eevee