I was wondering if I could clip a finished 3d model to view only a portion of the model without really messing with the object mesh directly. The idea is quite similar to the "Section plane" tool in Google SketchUp. Here is a screenshot of it.

The whole point of doing this is to be able to display the same object with two different design versions in the same position to more less achieve a before & After effect like the below-attached image. It would be great if I could animate the before model into the after model with a cool transition. 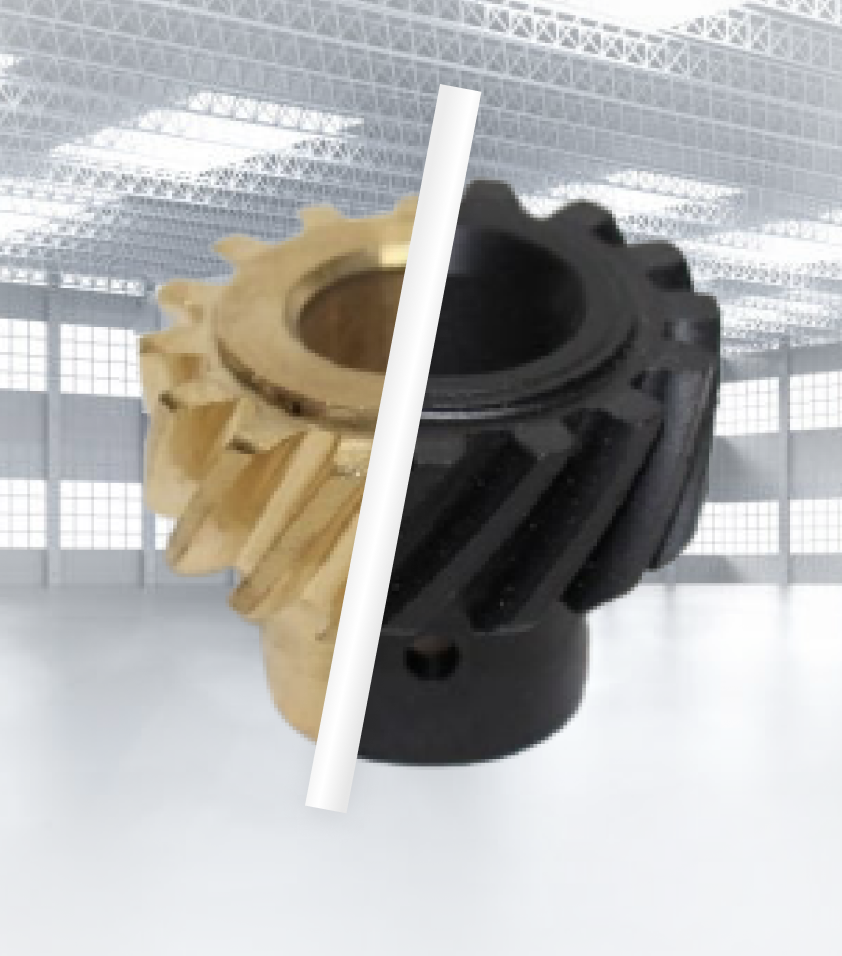 I am looking forward to hearing from you smart crowd. Thanks in advance. Ash

This accomplishes your first request, the slicer, by using a Boolean Difference operator. The techniques is fairly simple. 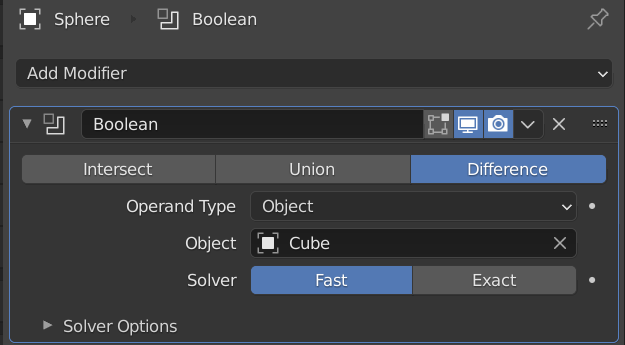 Note: You can angle the face of the cube that is the 'front' of the slicer if you want a slice that is at a diagonal to the movement of the slicer.

A trick for making the animation easy:

Now when you move the first cube the second cube follows it exactly.

Here's the blend file for my example, but if you want to render it, you do need to disable the cubes from the render and setup camera and lighting.

ok, so you want 2 objects with that technique, looks like i missed that.

All you have to do is use another object with the same material setup and double the materials as well so that each object has 2 own materials.

Here the explanation for 1 object: 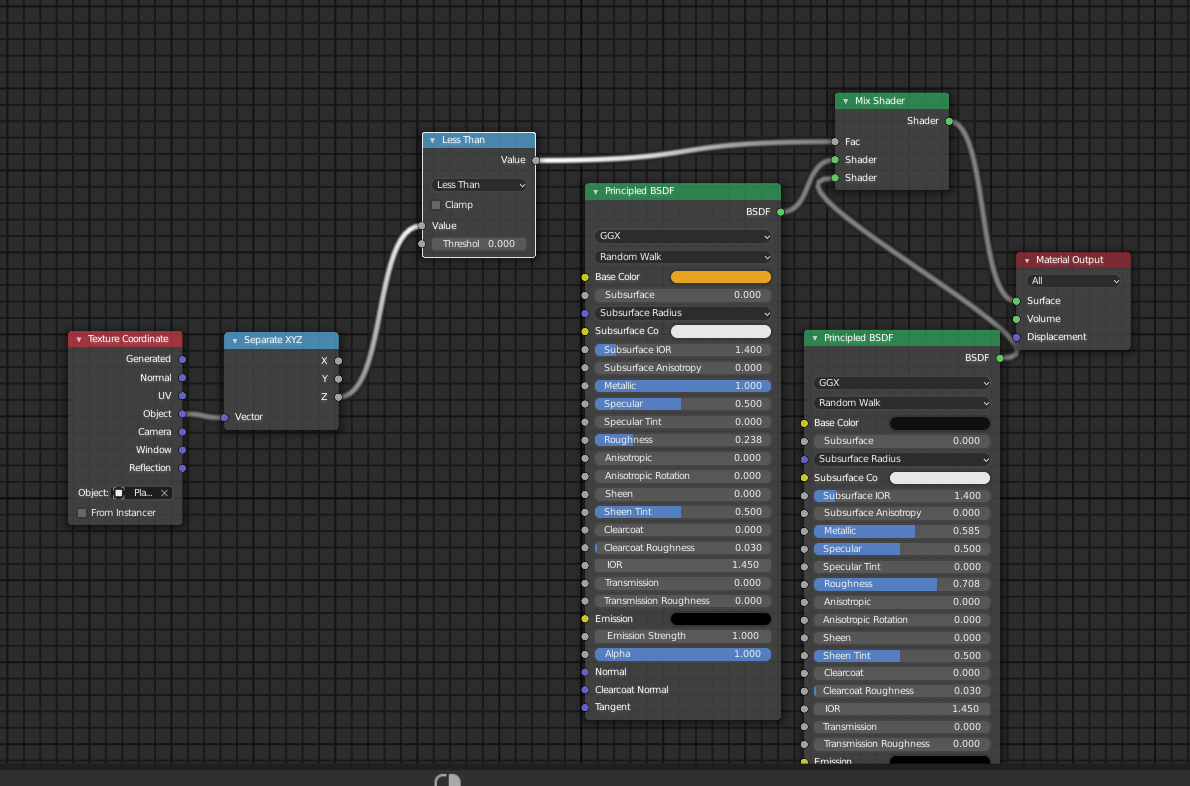 or with 2 planes and 3 shaders: 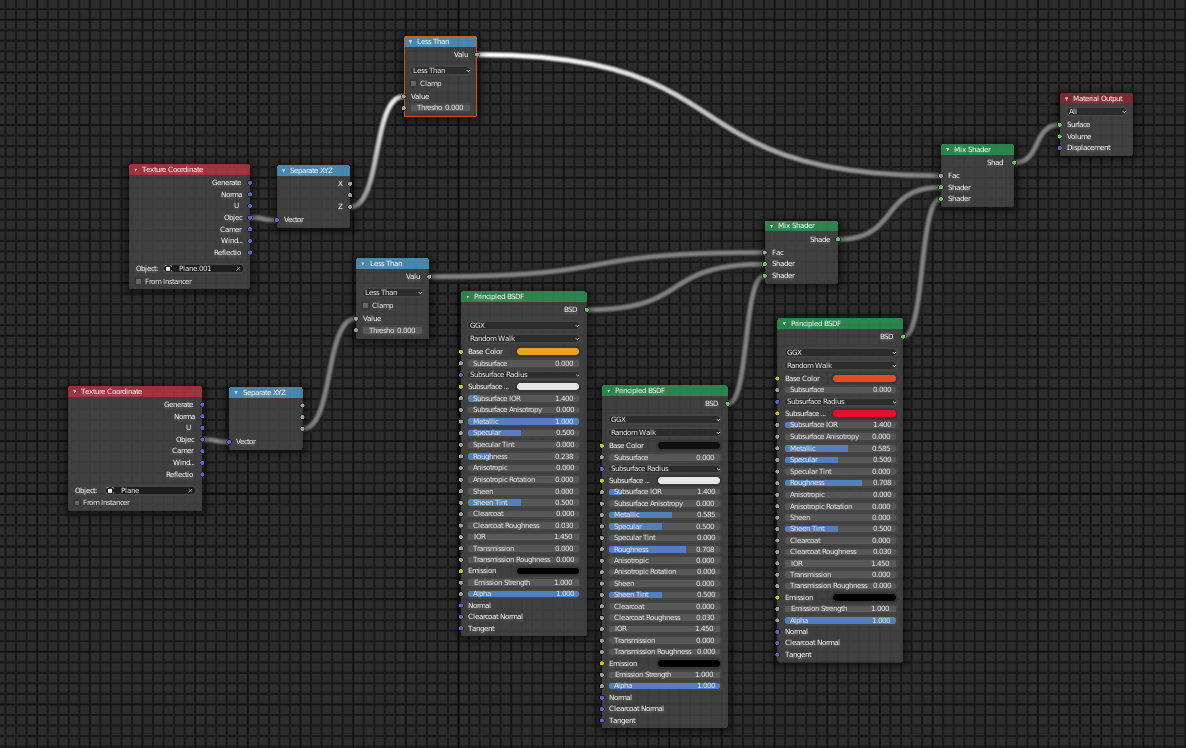 To expand my comment, you can easily achieve this effect with active bool using slice... You will technically slice your mesh into 2 with some 3rd object and 1 will use 1 material and second object will use 2nd material like this: 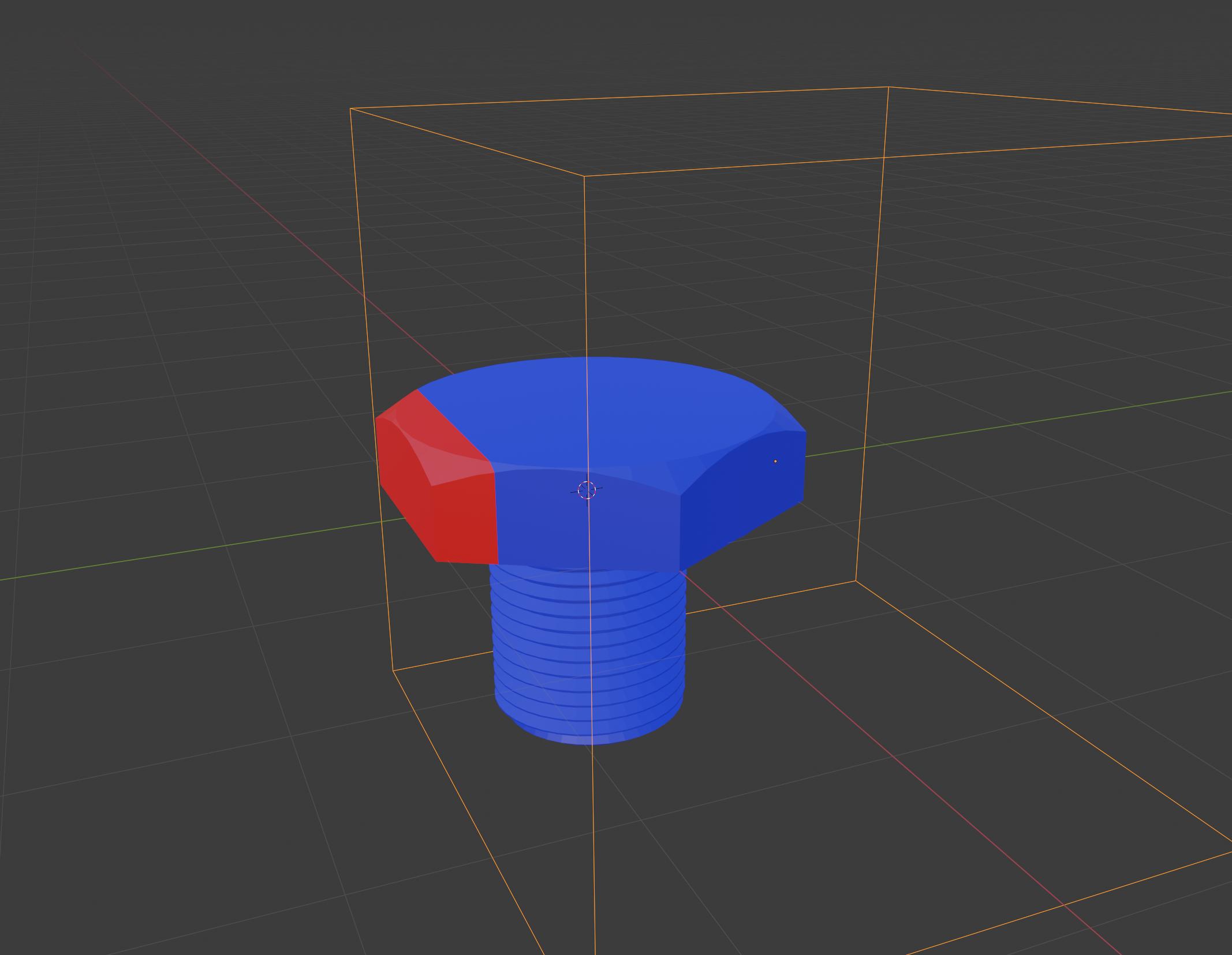 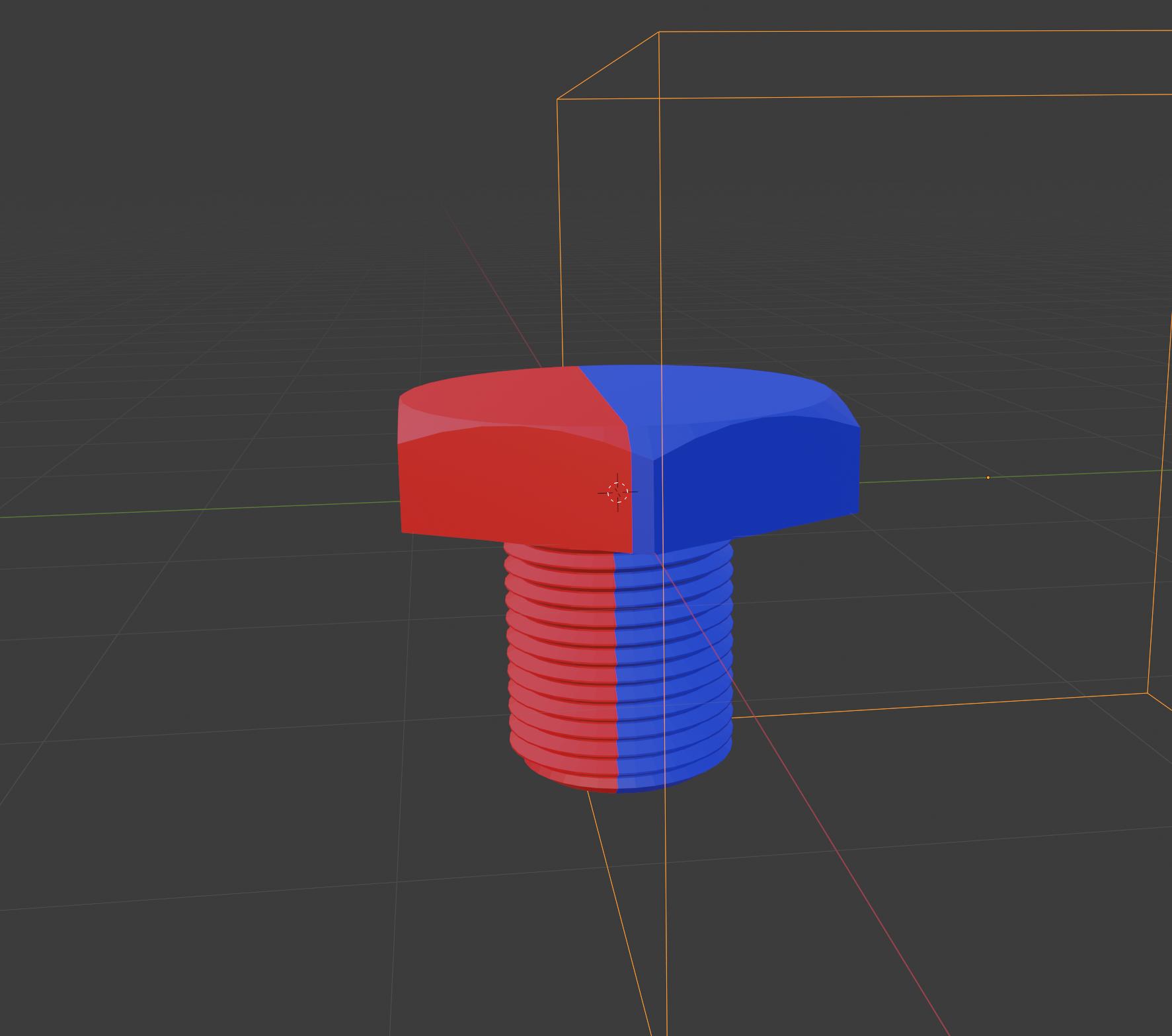 Way to achieve this is simple as well, just use your mesh, add one cube (or any object) and you can use default addon called booltools that will give you this menu and you can select your cube, your object you want to cut and press this: 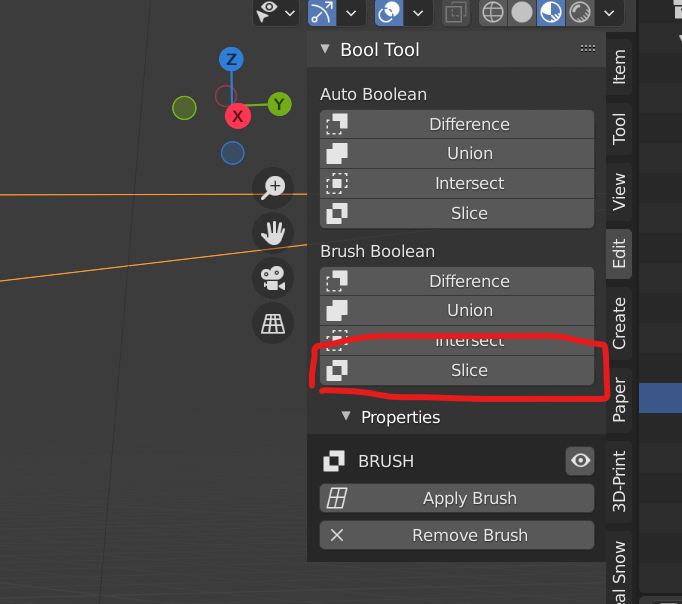 Your cube will be transparent and by moving it you will cut your object... now go to your object (you can now select each cut separately and click on this button and select object:

Do this for both objects and by moving your cube you will see that effect you want... If you want to make it better, you can but it will take additional steps

In 3D-view, set the orthographic view, and press Alt+B. You will got a frame like in selection box: 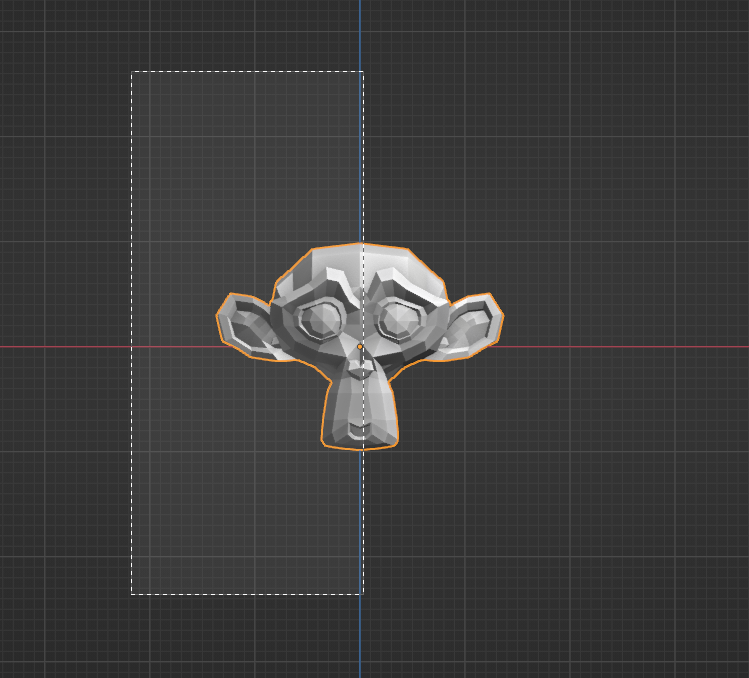 Everything outside this box will be hidden. Now you can rotate the view to reveal cuts. 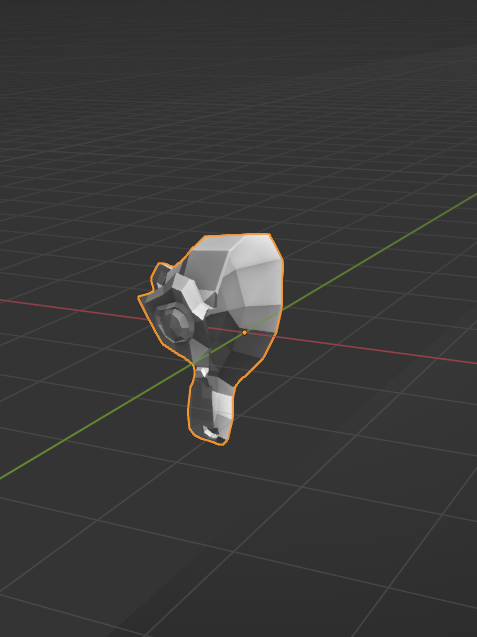 You can also make Alt+B cuts in perspective view, but in this case you will get pyramidal cut

1
Is it possible to make half of an object semi transparent and the other half non-transparent?
2
Why are my model's clothes collapsing in on itself?
3
How to calculate the cross-section area of an object?
4
How can I cut a complex Blender object in half?
0
I am trying to cut one Object plane using another object plane