Include an IK Constraint Influence value in a Rigify Pose

I want to include aspects that are normally reserved for animation into a character Pose, not into an animation.

In this case I had manually added bones to an armature (parent is Torso) and an IK constraint from an FK to an IK bone, and set the IK Influence to 1. 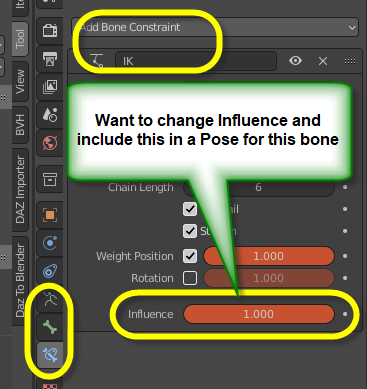 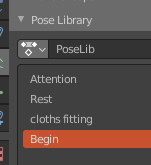 Now I'd like to do the same with this for a Pose that I do with the Rigify tools, to change the IK Influence and then include this into a named Pose: 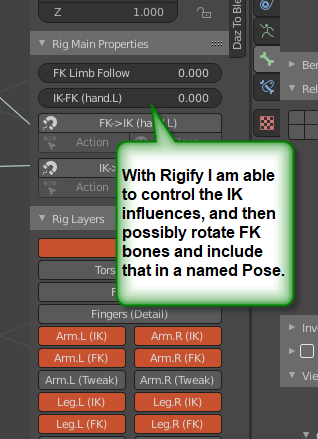 Note that my bones are properly to the FK and IK bone groups, but there is no FK->IK control for the Torso group.

An example use case might be like an elephant's trunk, that either swings loosely as a Softbody, or is influenced by a bone structure that controls it's use.

Is this possible to either:

If you add bones to the generated rig in edit mode, you can select those bones in Pose mode and add Custom Properties that show up in the Rigify control panel.

Of course, you have to be careful about letting rigify regenerate the rig

Take a look at Creating Meta-Rigs in the manual for how to add a custom meta rig to a a metarig armature using one of the existing classes. I know that there are already metarigs for trunks and tails.

Not the answer you're looking for? Browse other questions tagged rigging bones rigify pose-mode or ask your own question.

2
Using Python to Copy Rotation of Pose Bones
0
Animating a Nurbs Path's Influence
0
Rigify Rig: What's moving the chest bone?
0
Why does parenting Heel IK to Thigh Bone cause jittering in right leg but not left leg?
0
Baking animations on a Rigify rig with child of constraints does not preserve constraint
0
How can I apply constraints in pose mode?
0
why are rigify's IK pole targets Hidden in pose mode