...is to have a particle-trail-tail continue infinitely, despite having a "Frame Start / Frame End" property in the Particle System tab, rather than using keyframe animation.

My animation is a model of the solar system, where the planets are constrained to curves, and emit a particle trail which conforms to the same curve.

My Setup So Far

The animation above is frames 264 - 456. The extrapolated curve motion continues past frame 360, but the frame-coded particle emitter does not.

I thought I would use linear extrapolation like I did for the orbits themselves, but I cannot seem to figure it out.

I'm looking for a way to make the trails continue indefinitely, regardless of how many frames the ending animation turns out to be.

My object organization and hierarchy: 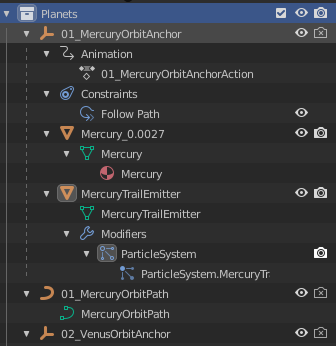 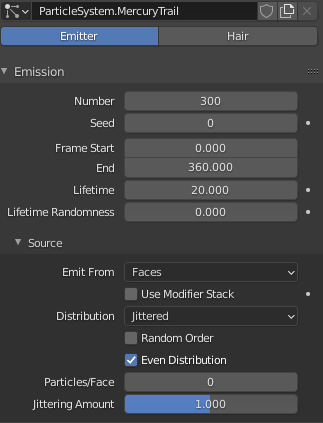 My trail shrink is a texture blend, using a ColorRamp from white to black. The Influence is set to Size. The Mapping is set to Strand/Particle: 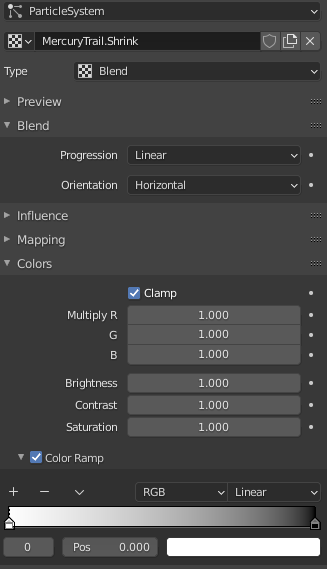 Can make a similar set up using an array and curve modifier.

Slap together a Very quick example

You can do this with animation nodes, but...the first sphere is not the biggest one, i don't know if you can live with that...

here is the nodes setup:

23
How to turn particle emission on/off?
0
Control the rotation of an environment map
1
Particle Emission Rate?
0
Constant speed along path
0
After applying curve modifier to text, I lose my location keyframes animation