How to animate morphing a rectangular plane into a sphere

I think the one who made that reference GIF (in another software) used two Simple Deform modifiers:

UPDATE: In the incoming v2.8, the Simple Deform modifer has a new option that allows choosing Local Axis, so you can use only one Empty in this case, like this: 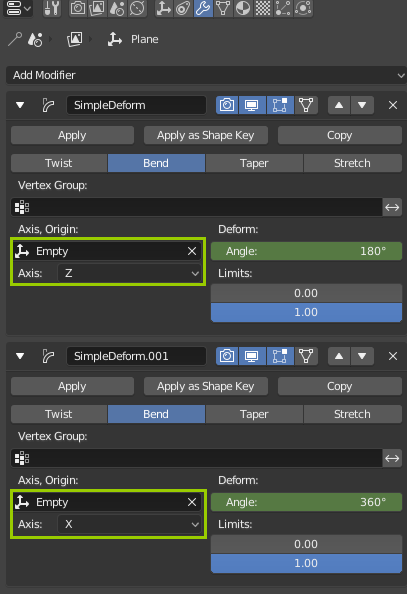 Not the answer you're looking for? Browse other questions tagged modeling animation workflow or ask your own question.

0
i am trying to make a globe but my simple deform modifier is not working
0
Animate a plane that transforms to a mesh?
0
Wrapping a flat plane around a sphere
15
Making a pineapple
33
What is the best way to unwrap a sphere?
24
How can I convert a node made material into an image texture?
9
Wrap curve around sphere
14
Morph targets: A sphere shape turning into a cylindrical unwrapped sphere shape
8
How may I get a single stripe of color to flow along an object?
7
How can I create spherical topology from a 2D image?
See more linked questions

15
Is it possible to twist a circle into a sphere?
4
Transforming (morphing) one object's shape into another's
0
How to animate morphing a sphere from a lipid membrane (rectangular plane)
2
Animate objects created from a grid-mesh / plane
0
Turn a flat mesh into sphere (for eyes)
0
Animated Sphere: How to connect bouncing followed by rolling on plane
1
Cutting a circular hole into a sphere without artifacts