How do I make an IK rig with separated bones?

Ill try to make this quick, I'm new to rigging so I bought a Model for a few bucks, model came as an .fbx file (Don't know if that makes a difference.) and I imported it to Blender. Got rid of some animation that was previously done so I had the basic T-pose. Went to go and move the elbow bone and it became deformed: 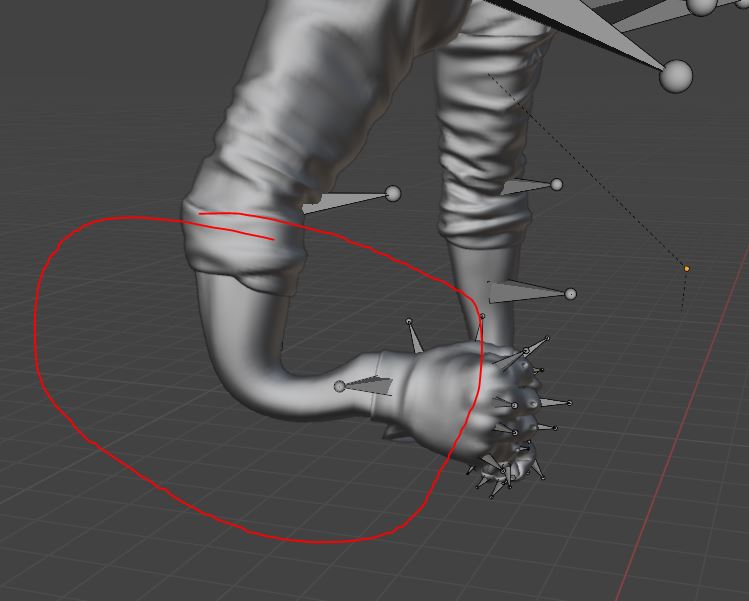 "Well,this is not cool at all" is what I thought "Maybe it's something to do with the armature and/or the rig." Come to find out, the bones in the rig are separated from each other. All of the bones appeared to be working fine (Besides the deformation part; other then that, the bones bent the right places.) It look to be IK rigged due to the dotted parent lines coming from each bone. "Well I guess I'll redo the IK rig real quick." I attempt to remake each IK rigged bone but when I started on the first one, the entire model changed position. (This was because when I parented the first bone to the 2nd one, the whole model snapped the bones together so they were linked and no longer separated.)

What it looked like before I tried to IK parent it: 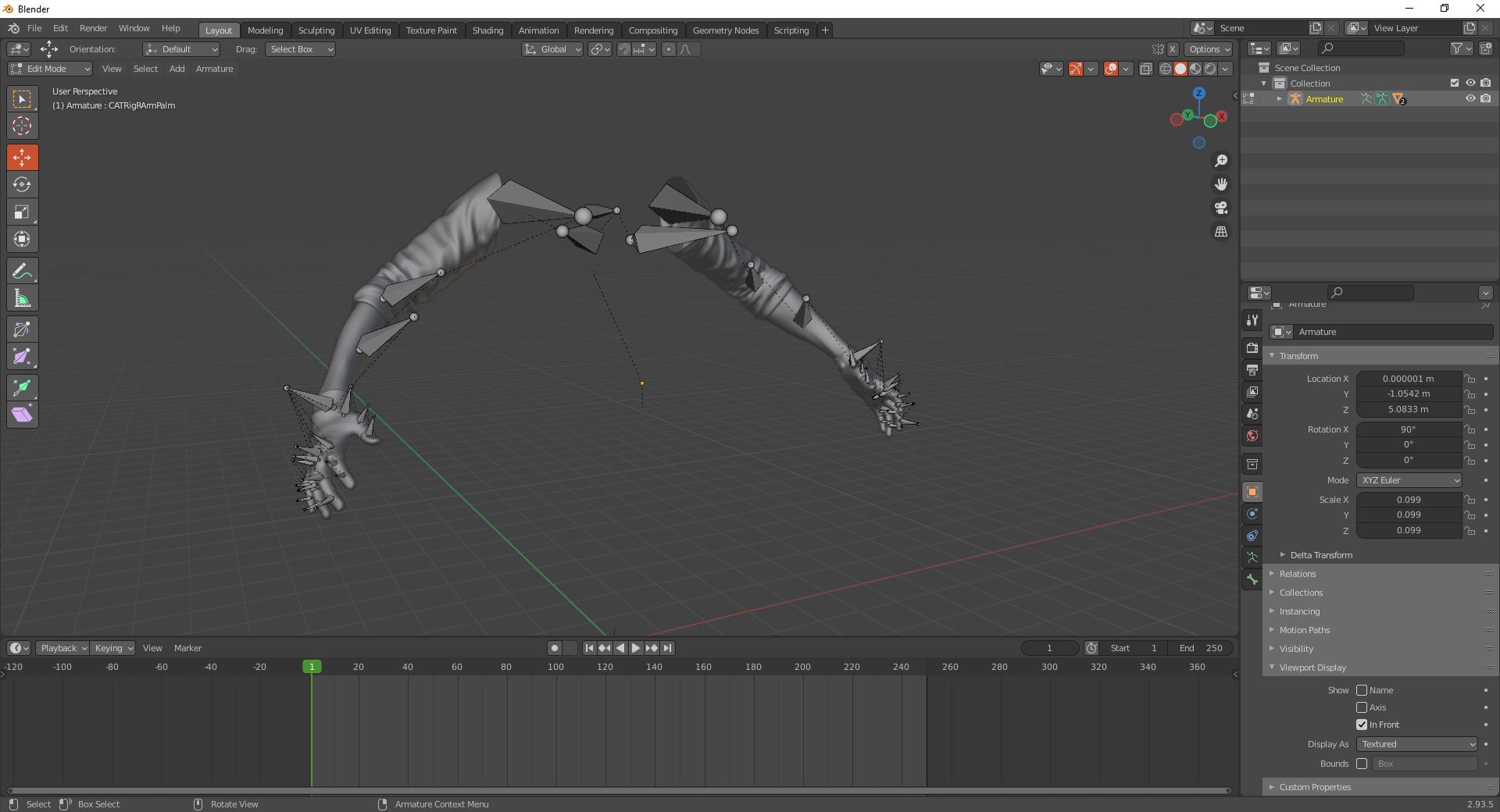 What it looked like after I tried to IK parent it: 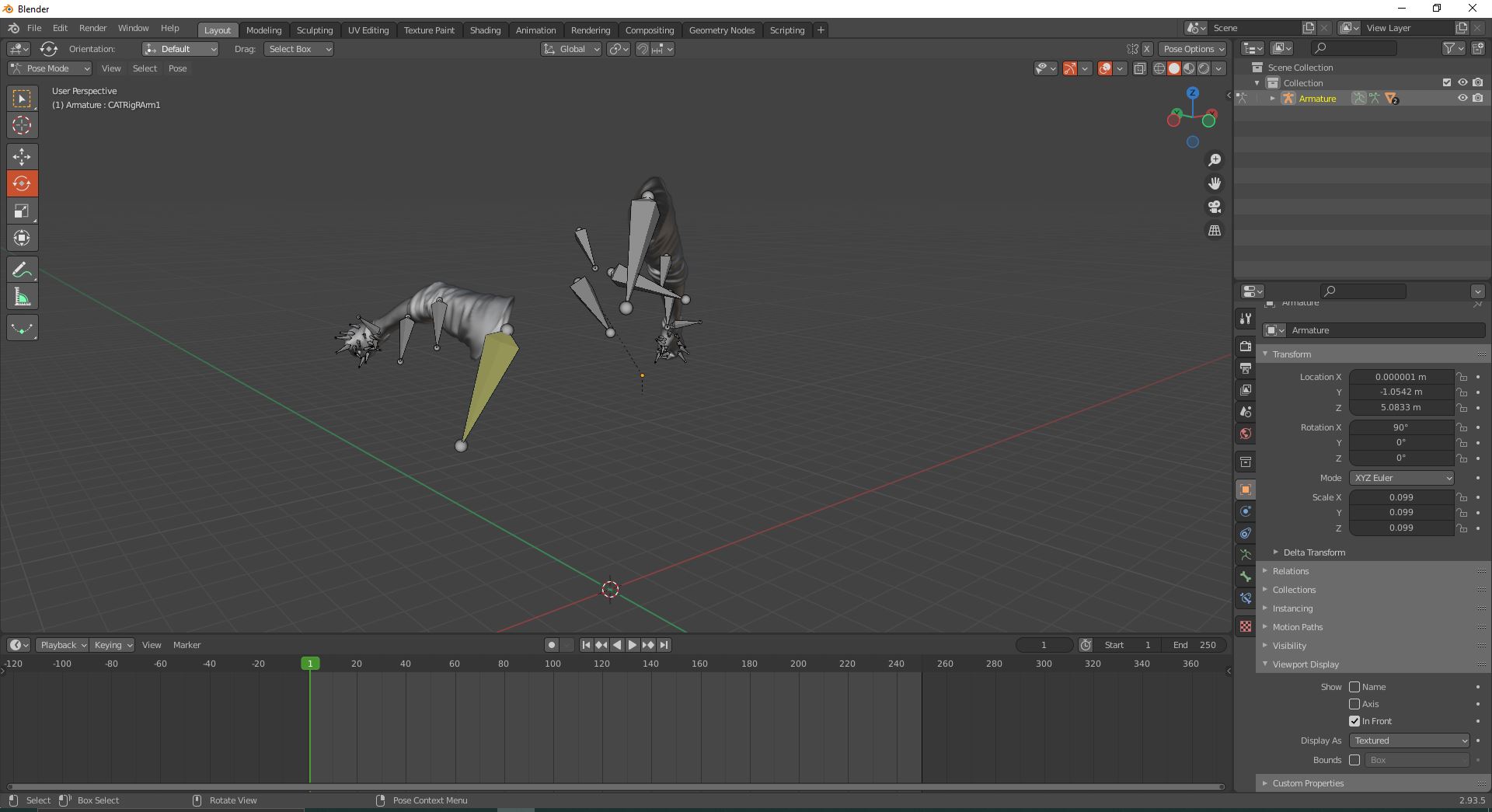 To make matters worse, the entire model completely spazzes out when you try to move it. So, a few questions I have are:

It's quite a broad question, I try to set some milestones.

Start from the last: Fbx doesn't matter at all, this is the armature as it was created.

Second question: this kind of armatures are built as "joints": they relate to the head location only, the tail is generally oriented on the world axis (to get easier curve editing) and its orientation relatively to the model is ignored. This kind of armatures are meant to be animated using rot only (loc applies to the root/hip bone only). If you use rot only the armature will behave as expected.

This means that this armature doesn't have IK features (the dotted lines are parentship indicators).

If you add an IK constraint to non connected bones, the bones of the chain will rotate trying to connect each other, deforming the mesh.

To solve you have two ways: if you're not interested in previously maden animations you can modify in edit mode the armature, so that the bones of the chains connect each other, then you can add IK constraints.

If you want to preserve the rig and its animations as they are, you have to add a complete IK rig and make it control the original rig using bones constraints (like "child of" bone constraints).

Not the answer you're looking for? Browse other questions tagged rigging armature bones inverse-kinematics or ask your own question.

0
Having trouble with IK bones
1
Bulk renaming armature bones after already creating them?
7
how to rig this object (function compass)?
0
Eyes and rig problems when exporting to .fbx
0
Rig with sticky feet and hands, how do I create arm swings? (ex: playing tennis)
0
Rigging a skeleton hand with separated bones
0
Bodies missing from bones?
0
How can I apply bones rotation to make sure it is 0 after export?
1
How to work with control bones when armature follows a path