Use 2 color pickers to drive one value?

I'm currently driving the hair and body base color from a single property on the character below. However, I'd like the hair to be driven by another property as well. So that both properties (when changed) will drive the hair color to the exact color of only the changed property.

So, for example, I'd like to be able to do this:

Any idea how to pull this off?

I've been trying to find scripted expressions that only send a value when a driven property variable is changed. But if it remains the same it is not read.

Turns out that you don't really need msgbus for this. I don't know exactly how this would integrate into your code, so I'm just going to post the necessary code fragments and let you figure out where to put them.

First, you need two custom color properties, attached to anything, but I've attached them to bpy.types.Scene because that means you can use them anywhere in your scene and each scene will have its own copy.

The "sneaky" bit is the last line of the definition of mainColor: the addition of update=update_colors to an otherwise typical Color custom property.

This tells bpy that you want a function called update_colors called each time mainColor is updated. That function handles resetting secondaryColor when mainColor changes:

I added a panel class so I could test this, but you could just integrate the two new properties into your existing panel:

For my test, this creates a panel that looks like: 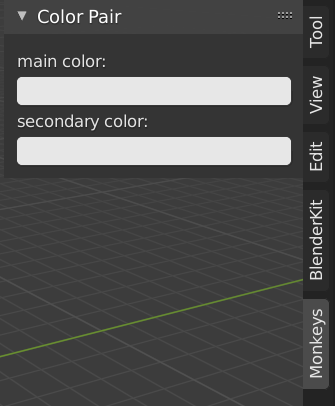 (The panel shows up in the Monkeys tab of the sidebar because I've been following the Scripting for Artists tutorial and that's the tab used in the tutorial.)

Here's the tab showing the two colors being different after I change first the main and then the secondary: 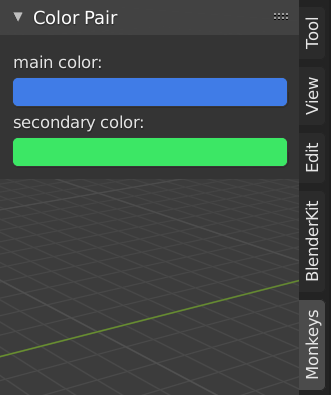 Here's the tab immediately after changing the main color without modifying the secondary. 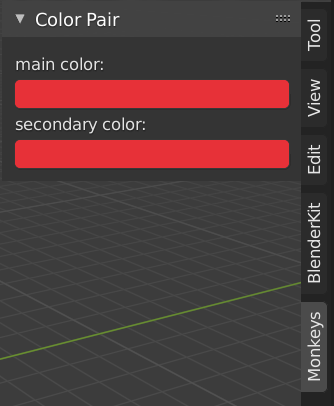 Having done this, you can use the new custom properties as drivers for RGB inputs in shaders, or anyplace else you want to use them.

Not the answer you're looking for? Browse other questions tagged python scripting node-editor drivers properties or ask your own question.

10
Execute function on object property change
2
How can I temporarily disable a handler?

4
Node with 2 color & alpha options
3
Copy a node-based material to another object, and then freely edit the second one?
0
Non-uniform fading from one texture to another
0
How do i control a driver using an RGB node?
1
Modal Operator Not Updating Driver(s)?
4
Change object color depending on camera rotation