How to use Copy Rotation constraint to copy Quaternion rotation?

There is no Quaternion in Copy Rotation's Order option: 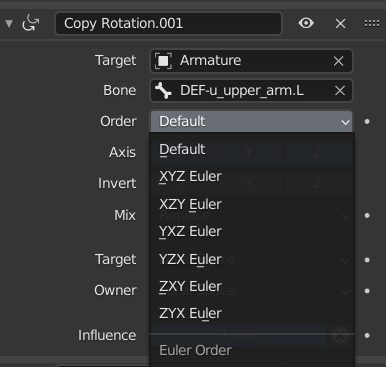 The idea of copying a single quaternion axis isn't really one that makes sense. Quaternions are not divisible into axes. They are complete, 4D vectors that represent angles.

You might find it useful to play around with using drivers to edit your angles instead. Drivers can be used to control the individual components (not axes) of quaternions, copying those components from a different transformation, if that's what you want. This might be a useful way to understand how quaternions don't have multiple axes the same way that Euler angles do. However, based on what you're saying, it's unlikely to get you to the animation you want.

That field is order not rotation mode and for quaternions you simply don't need any orders.

the default state works for both quaternions and angle-axis rotations.

This is my understanding so far (probably not entirely correct):

The Order option is indeed rotation mode. (The answer above is wrong). Copy Rotation converts the quaternion to euler, then converts it back. It's impossible to only copy one of 4 quaternion values (and even you could, the result would be very counterintuitive). And because the relationship between quaternion and euler is not a 1-to-1 mapping, this conversion can lead to unexpected result when used with keyframe interpolation.

Not the answer you're looking for? Browse other questions tagged transforms constraints quaternion or ask your own question.

5
Copy Rotation Bone Constraint fails
9
When should I use Quaternion (WXYZ) and how should I handle the W Quaternion Rotation?
1
Copy rotation rotates through wrong axis
0
Bone Limit Rotation constraint not fully working
0
Copy Transform Constraint Wrong Rotation
1
Rotation Constraint Breaks When It's Target Gets A Copy Location Constraint