Sorting cubes according to x-dimension size via python in blender

I want to sort 12 different "cubes", they are not really cubes more like objects, according to there size in x.

so from picture nr.1 to picture nr.2. I have started by putting my collection of cubes in a list, but where do I go from there? 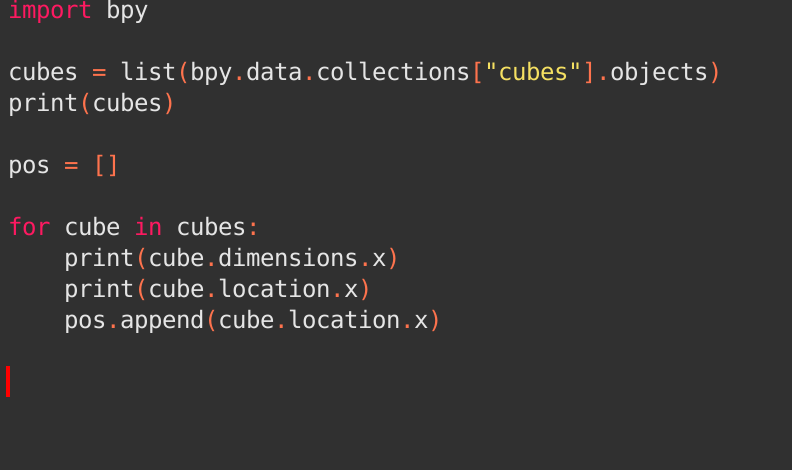 edit: All I want is to have the objects sorted on the x-axis according to their x- length from smallest to largest. If you look at the images, the first image representing "before" and the second "after", the "skinniest" object will be placed first, and replace the cube that was there from the start. That is all I want, just for them to be sorted according to size, like the second image. I apologise for being unclear, this is all very very new to me and I honestly don't know really how to articulate any better. Thanks.

Sort by both, zip together.

Test script, select the cubes collection to give it context, or hard code as in question.

This code will solve your problem as stated:

Once it has created the dictionary, it moves the objects into sorted order, starting at 0 and incrementing by 2 for each new object.

There are three things that could be improved in this code, but how you want to improve them are up to you.

Not the answer you're looking for? Browse other questions tagged python blender-internal-render-engine or ask your own question.

30
Python performance with Blender operators
3
Low level vs High level object creation speed UPDATE: Fast Data-Block Link to scene
0
Colors in rendered image are too dark?
1
How to quickly assign an individual material to color thousands of cubes at the same time with python API in Blender 2.8?
1
Difference between played and rendered animation
0
Get all the objects intersects or falls inside a specific object