How do I setup an emission map for blender internal?

I want to take a model that has an albedo/diffuse, normal, ao, specular, gloss maps, etc. and I also want to add an emission map that will cause specific parts of the model to glow based on the colors represented in my emission map. Basically I want to achieve what this person seems to be doing with no issues: http://youtu.be/crMxJ6Ge1jE.

What I have tried:
I took a cube, created a material and a texture slot and textured it with a blue color like this: 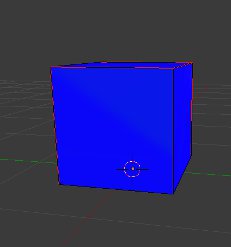 I then created an emission map (green dot painted on it) and assigned it to a new texture slot. Here you can see the two maps that I am using.

I have tried several emission map setups as follows: 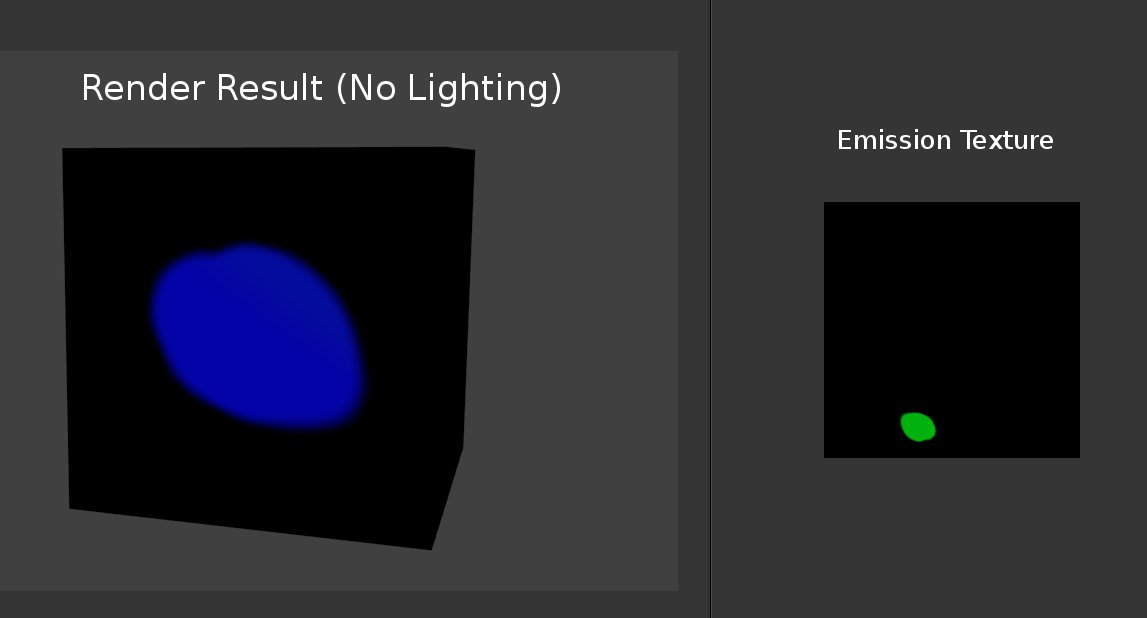 The tutorial method didn't work at all. With no lighting, the cube was pure black with no emission.

If you want to generate emission, maybe you should use "Indirect lighing" with blender internal, or Cycles :)

You should probably read mataii's answer first. He brings up a good point and since watching a 10 minute video isn't something I wanted to do I did miss the point of the question a bit.

Several of the influence parameters for Blender Render(Internal) materials are only able to access the textures 4th component: the Alpha channel.

It would be nice if we could choose from (x,y,z,a) so that we could pack 4 masks into one texture and use that texture for Emission, Specular Intensity, Hardness, etc... but for now, if the influence uses a mask, that mask has to be in the alpha channel of a four component texture.

If you want your Emission mask to have color then also check off 'Color' :) For the Emission mask, you had "RGB to Intensity" activated right below Blend->mix under the Influence section. That causes the green to become blue so be sure to uncheck that.

The following image shows what happens when Emit is checked and there is no light in the scene. The object becomes bright blue and there is no hint of the green blob. That's because the Alpha channel for that image is pure white and this makes Emit 1.0 for every point on the model. 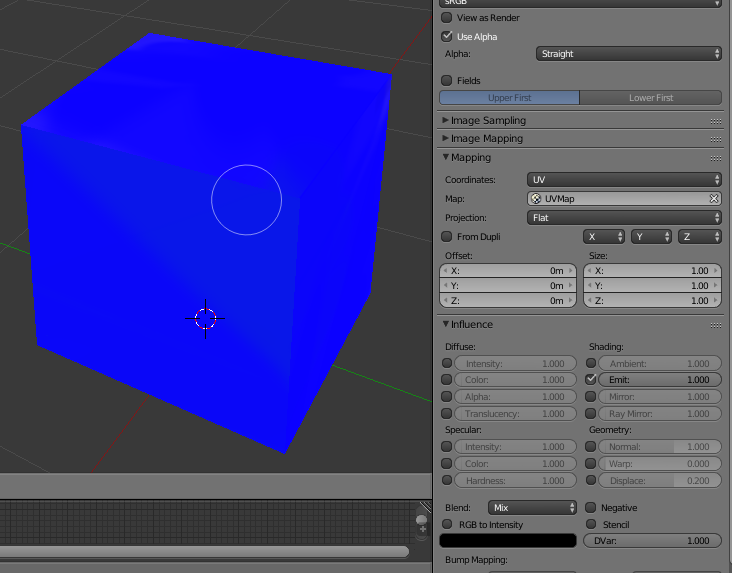 In the following image I have the Color Influence activated and set to 1.0 and the Emit influence set to 1.0 as well. 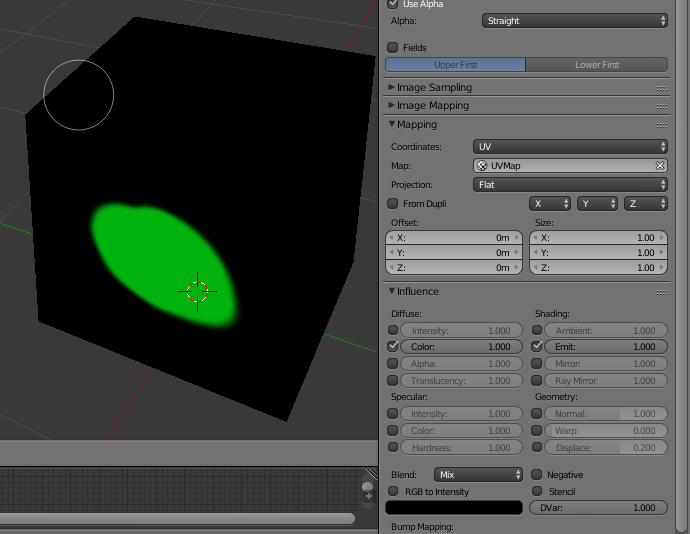 You can test the effect that an alpha mask has on Emission by going into Texture Paint mode and make sure that the Emission texture is selected. Now select Erase Alpha from the Blend menu.(If you use a pen tablet you should be able to skip that last step since the pen's eraser is supposed to automatically use Erase Alpha. It does for me so if it doesn't for you that's a bug report.) 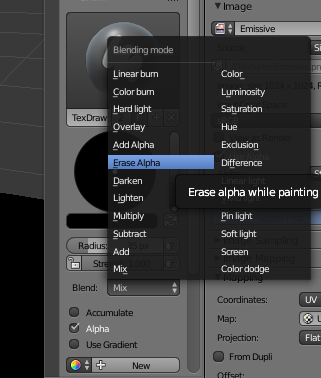 I believe a quick animation is now in order and there is one sun lamp in the scene to show contrast.

For Cycles the Emission texture is plugged into an Emission shader and the same texture is also being used to control the mix factor for a Mix Shader that has a Diffuse shader plugged into the other input socket.

The Emit texture is routed through a 'Converter->RGB to BW' node since color should be avoided for masks. The Mix Shader uses black and white(0.0, 1.0) to determine the mix factor so we want to make sure that what goes in is also single a channel value. (This helps keep things predictable though not strictly necessary.)

For Cycles, the texture's Alpha channel doesn't matter here since your mask can be in any one of the channels and easily accessed using either of the "Separate XYZ/RGB" nodes. In this case all three color channels are the mask, that's why I converted to black and white. An better option would be to separate out the green channel and use that since it's the mask in this case and adjusting it would also adjust the others if they are still combined. 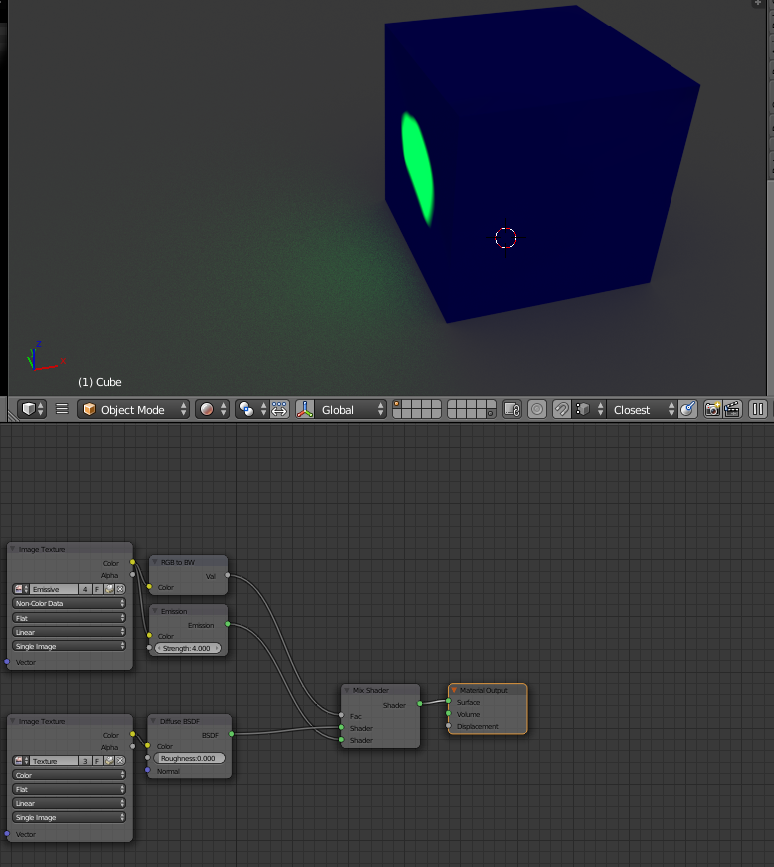 10
How to pick target texture image for baking?
1
How to constrain emission particles?
0
Getting a normal map to work in a multiple uv node setup
3
Rock PBR Texture Creation within Blender (Procedural) for export in game engines
0
How does this normal map create surface imperfections instead of elevations/bumps?
2
Is a Directional/Flow Map Necessary for Hair Cards?
3
How do you bake out a world space/position normal maps?
1
How do you export an ambient occlusion map to an FBX file?