The short version is I have an IK setup on my rig. The legs work mostly okay, except for the knees. The knees will NOT bend to find a solution to the IK problem. The arms, set up in a similar way, will bend correctly at the elbows to find a solution.

If I lift the foot pad goal up slightly, the knees will NOT bend. However, if I change the constraints on the knees and allow them to bend backwards, they WILL do that to solve the problem. They won't bend in the correct direction.

I thought this might have something to do with the rotation of the bones, so I tried rolling them with no luck. I tried adjusting the position of the knee pole, but that didn't help either. I can't seem to figure out why the IK solver is so opposed to bending the knees to solve a problem. The issue happens on both legs.

I do have a small bend in the knees, so the related issue (Similar issue: IK-rig doesn't bend when I add elbow-target/elbow-pole) doesn't seem to apply. I can't share the .blend file yet, but I'm working on getting permission. 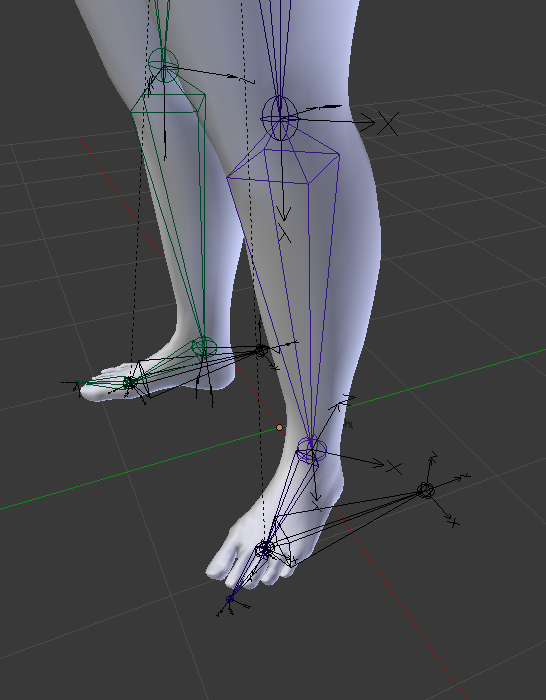 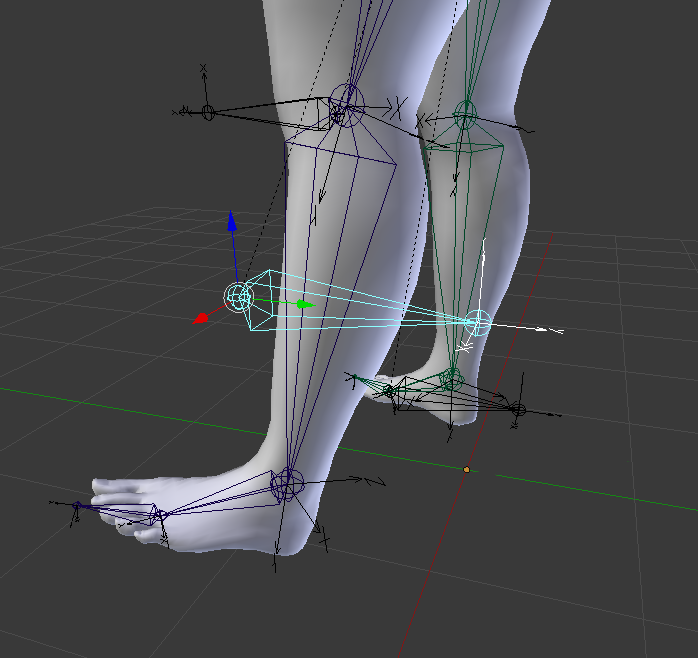 Visible Constraints in the Knee: 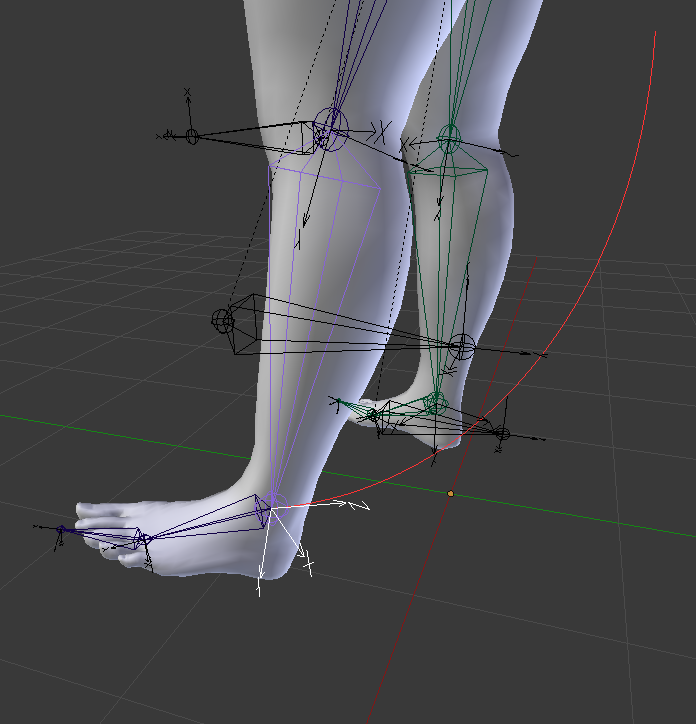 Relaxed Constraints and the Bad Solution: 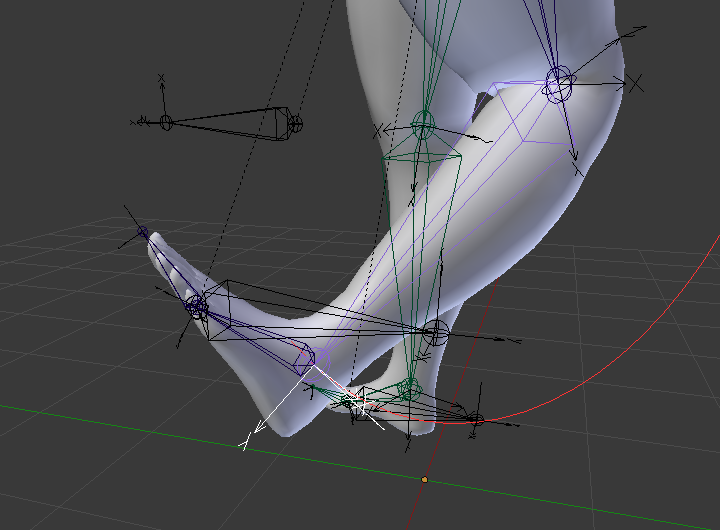 If I turn off the knee constraints, leaving only the pole bone, the hip twists backwards and the knee points away. That might seem like the pole rotation is wrong, so I tried reversing it... (See next picture.) 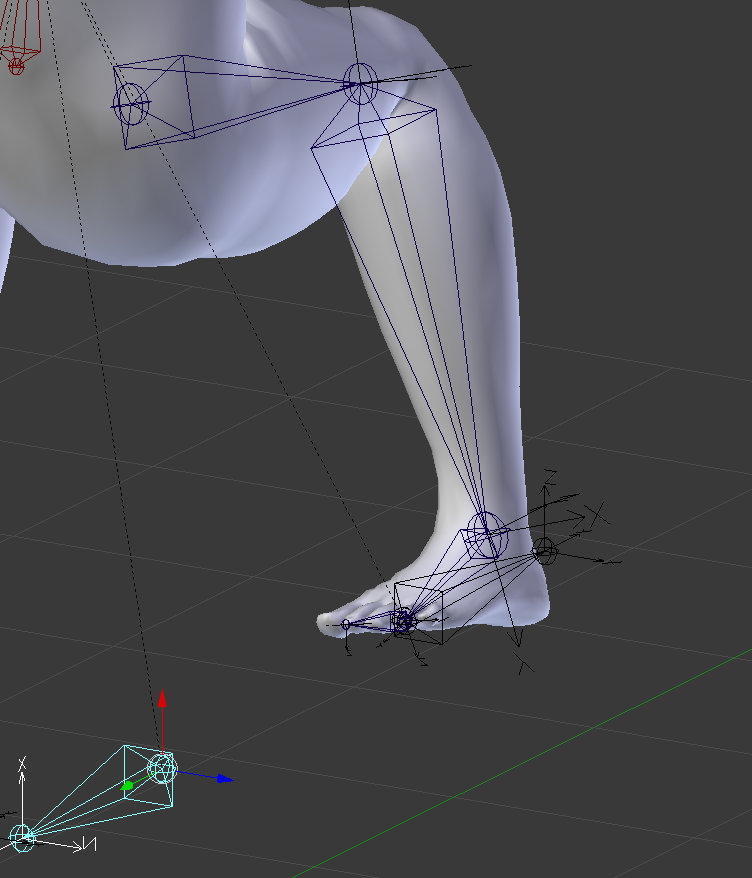 When I reverse the pole angle, the hip twists around 180 degrees to compensate. The knee STILL bends backwards, but points towards the pole. 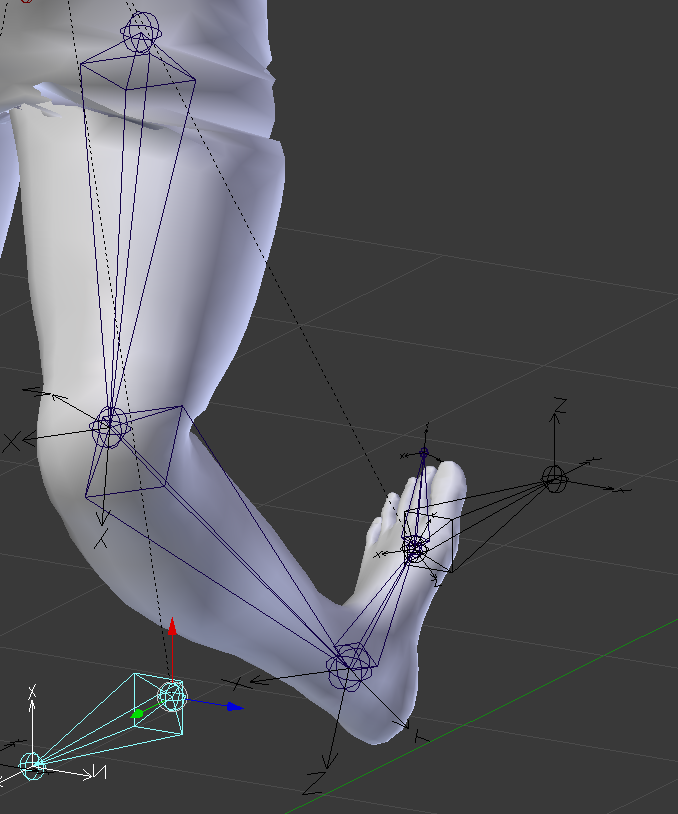 Thank you to everyone who responded. A synopsis of the workaround. (I say workaround because this isn't really a fix, but it's more than functional enough to unblock progress and move forward. A true fix would be figuring out why the IK solver isn't deducing a solution to chains of length three.)

The original IK configuration had the constraint placed on the FOOT bone with an IK chain of length three. The solution involved moving the IK constraint to the SHIN bone [one up] and decrementing the IK chain by one. Now the knee bends properly.

I speculate (again SPECULATE, I don't know if there is any basis here) that perhaps having the foot as the target of the IK chain meant that there were two bends [the knee and the angle] which were being used for determining the direction of the bend -- that is to say, instead of pointing the knee bend at the knee pole, it was trying to point the ankle at the pole and ignoring the knee, keeping that segment strait.

I'm very grateful to everyone who provided insight. Special kudos to Jerryno and Naioai for setting me on the right track.

Not the answer you're looking for? Browse other questions tagged animation rigging armature constraints or ask your own question.

1
Parenting and deformation
1
Adding pole bone to IK ignores IK constraints
3
Why are my PitchiPoy Knee and Elbow Directions wrong?
1
Problem: Armature deforms mesh when after parenting
1
How can I set an IK limit on a bone's Y axis?
1
How to link custom object animation controls to rig components
1
IK Bone Constrain - Foot is weirdly rotated