How to make a true linear quaternion rotation?

It turns out to be impossible to make a 360° rotation by using quaternion only with 2 keyframes. So I used three. However, the result appears unlinear, even though the curve interpolation type are all set to Linear. demo file

I wonder if this is something unavoidable. If not, is there any way to achieve a true linear quaternion rotation?

You would need to make a sinus/cosinus graph for that animation to have linear motion with quaternions:

For the 1st cube I set Euler rotation and animated a linear rotation, with Copy rotation constraint copied that to the second cube and then baked the animation on it with Object > Animation > Bake Action (visual keying on). This resulted in (the gif is little laggy):

This could be done easily with Sinusoidal easing type. Setting correct easingIn/easingOut for keyframes yields to this nice result:

I would use drivers for this. For a simple rotation around a static axis, it's quite straightforward, and the formulae can be entered directly in the driver window. No need for elaborate Python scripts.

A rotation quaternion is composed of four trigonometric values:
W = cos(a/2) for clockwise rotation or W = -cos(a/2) for counter-clockwise rotation
X = dirX*sin(a/2)
Y = dirY*sin(a/2)
Z = dirZ*sin(a/2)
where a is the rotation angle and dirX, dirY and dirZ are the X, Y and Z values of a vector that describes the direction of the axis of rotation. This vector should have a magnitude of 1, i.e. sqrt(dirX**2+dirY**2+dirZ**2) = 1

For linear rotation where 360° takes a known number of frames,
a/2 = (frame-1)*pi/(number of frames)
(Blender normally starts at frame 1, and the rotation at the first frame should be 0, hence the subtraction of 1 from the frame number).

In your example file the rotation is around the global Z axis, whose directional vector is (0, 0, 1), and 360° takes 40 frames. This yields the following driver functions. Use the Scripted expression driver type. 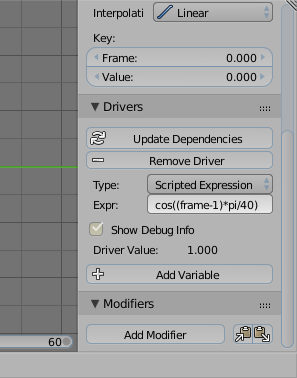 In this image, I'm actually rotating around the Y axis in front view, but the basic idea is the same.

There are several methods to calculate the values of dirX, dirY and dirZ. I will try to explain two of them.

You need to know the angles between the axis of rotation and the global X, Y and Z axes. Let's call these angles aX, aY and aZ. Then it's as simple as
dirX = cos(aX)
dirY = cos(aY)
dirZ = cos(aZ)
These are the direction cosines of the axis, and if the angles are composed correctly, the vector (dirX, dirY, dirZ) will have a magnitude of 1. If it doesn't, the angles define an axis that can't exist in 3D space.

A more in-depth explanation of the math behind all this, is most likely off topic here, but it probably would be right at home at math.SE.

Inspired by answers from SixthOfFour and Jerryno, I optimized the curve with the relatively new Robert Penner Easing Equations feature, set type to Sinusoidal, which saves quite a lot keyframes.

3
How do I ensure a sequence of quaternions from matrix.decompose() is continuous?

24
What's Wrong with Quaternion Rotation in the Game Engine?
12
What are the benefits of Quaternion rotation over Eulerian rotation?
9
When should I use Quaternion (WXYZ) and how should I handle the W Quaternion Rotation?
1
Apply linear transformation to a set of vertices
4
Linear curve to wave curve
0
How can I linear increase to Location Value
1
How to rotate a shape in another 3D software so that the rotation matches with the rotation in Blender?
0
Snap vertex without deforming mesh