Is there any way to fix the awful topology on curved text?

So I'm trying to make a license plate and have it bend around a shoulder like armor. Not sure if it's the best method, but I got the text on there by typing it out, bending both it and the backplate it would go on around a bezier curve so they both curved at the same angle and lined up, then converting text into a mesh and solidifying it. It worked pretty perfectly except for the fact that the topology on the text after applying the solidify modifier became super complex and created all these weird sharp angles all over it. 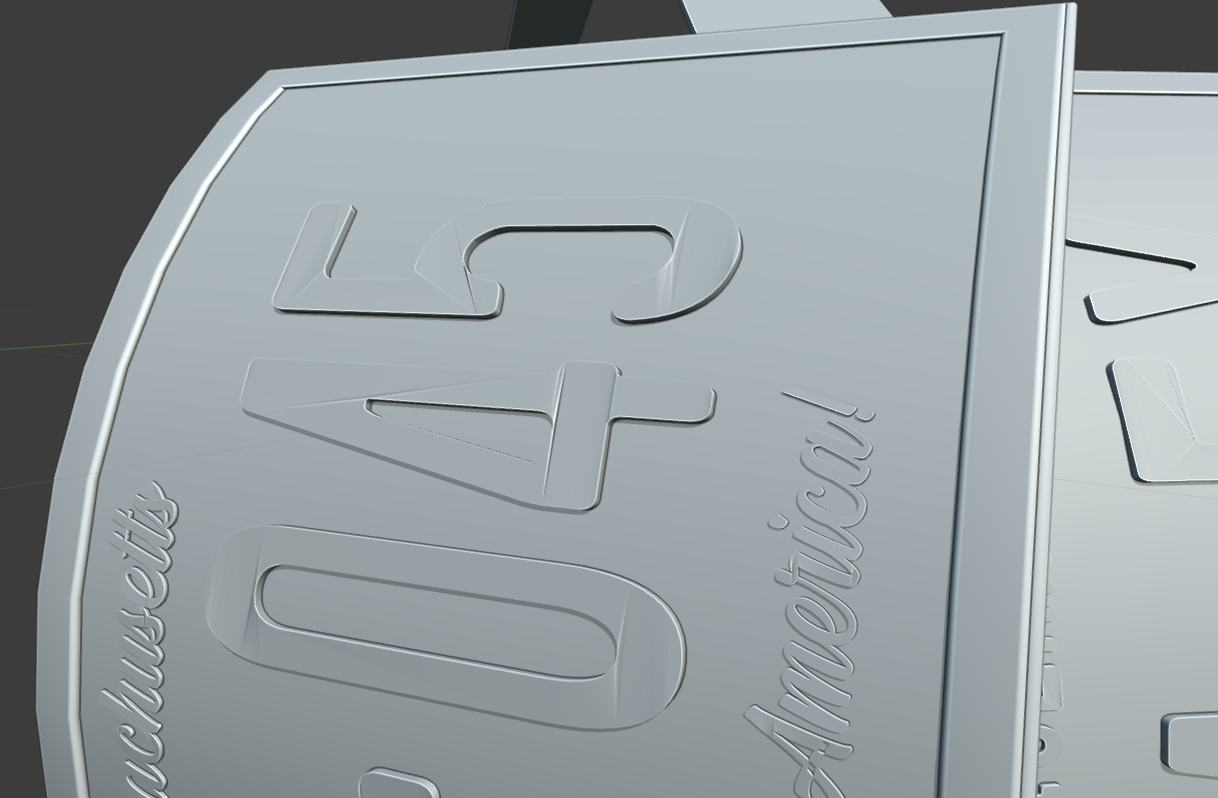 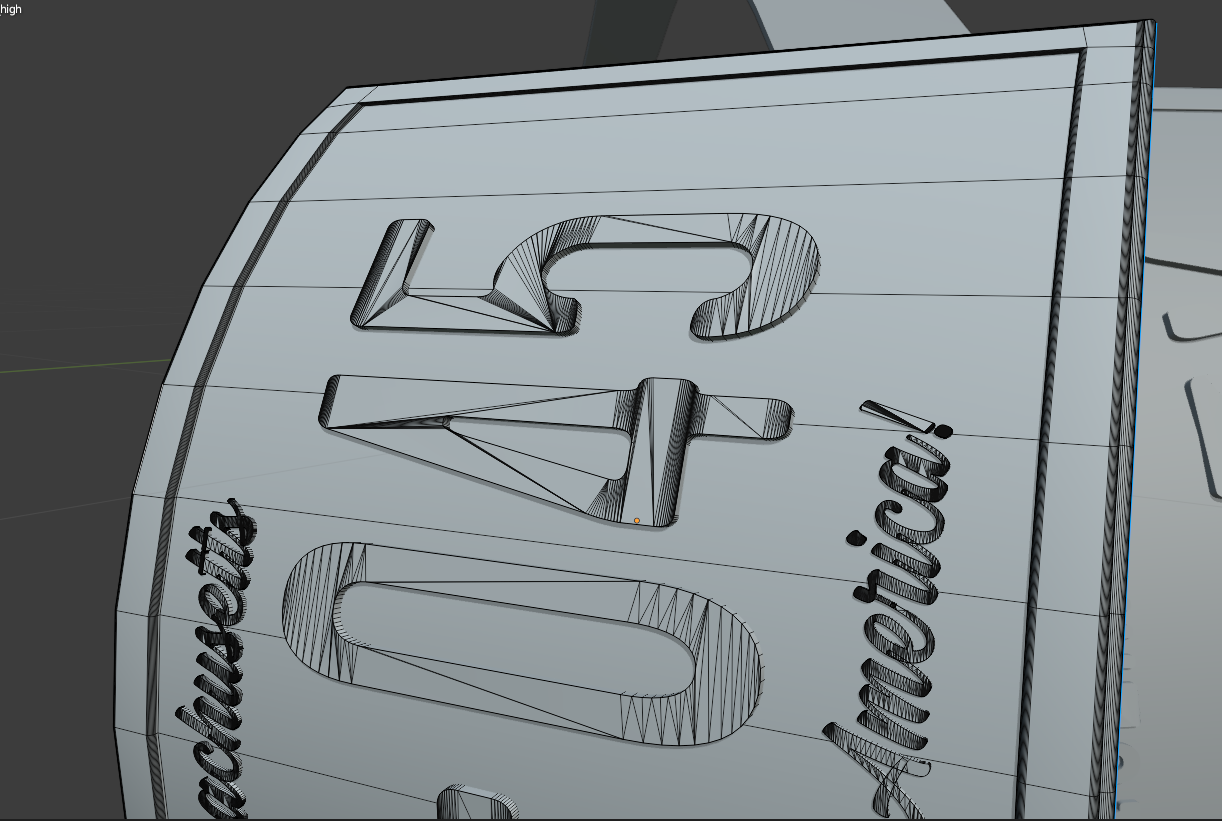 Pretty new to Blender, so I don't know where to start with fixing something like this, so I tried going in a getting rid of some of the top edges, hoping the shape would sorta smooth out. Probably pretty far from the best method though, so no surprises that gave a weird result too, put a weird floating face that did a kind of overhang that covered up the curve of the text underneath.

Here's a picture of that: 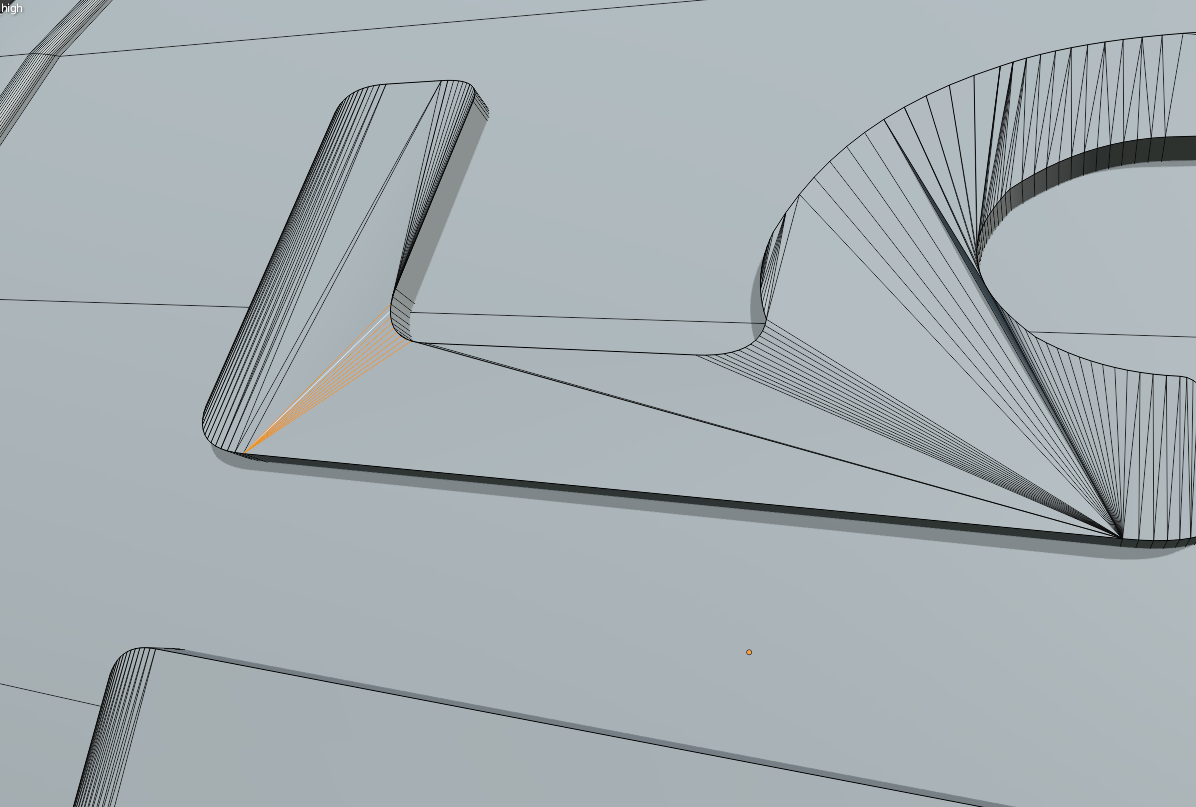 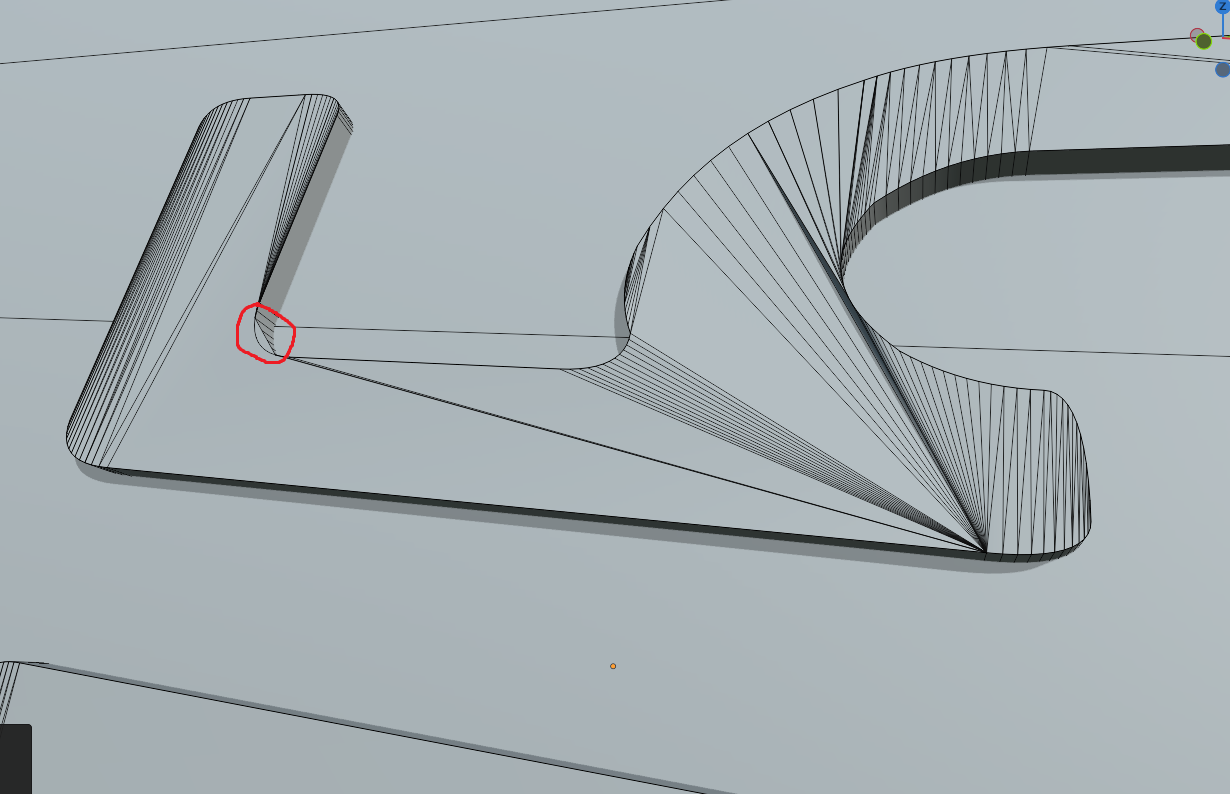 It's not a huge deal, if there's nothing I can do or if the solution isn't worth the effort I'll probably just leave it. It's part of a high poly for a game asset, the low poly is just a smooth surface, so no topology issues with the one I actually need to unwrap and stuff. It does show up a bit on the normal map after baking, but it's less noticeable, only really see it if the light hits at just the right angle and you're looking for it. But I would also like to clean it up as much as possible, so any help is greatly appreciated.

But if you want real 3D, as explained somewhere by Robin Betts, you can first delete the topology with X > Limited Dissolve: 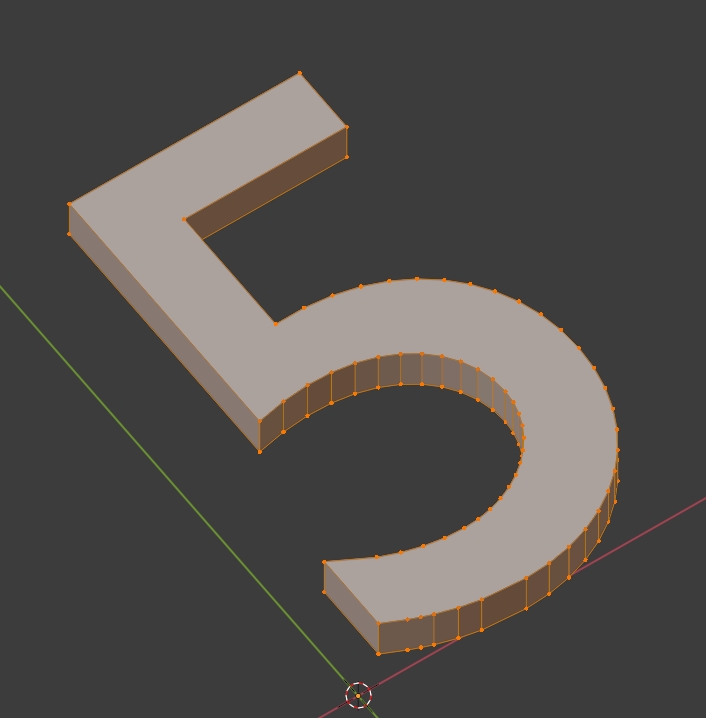 Then create a grid, delete only faces, put it in front of the object, choose the orthographic view, select the grid, shift select the object, go in Edit mode, in the header menu, choose Mesh > Knife Project, in the Operator box enable Cut Through: 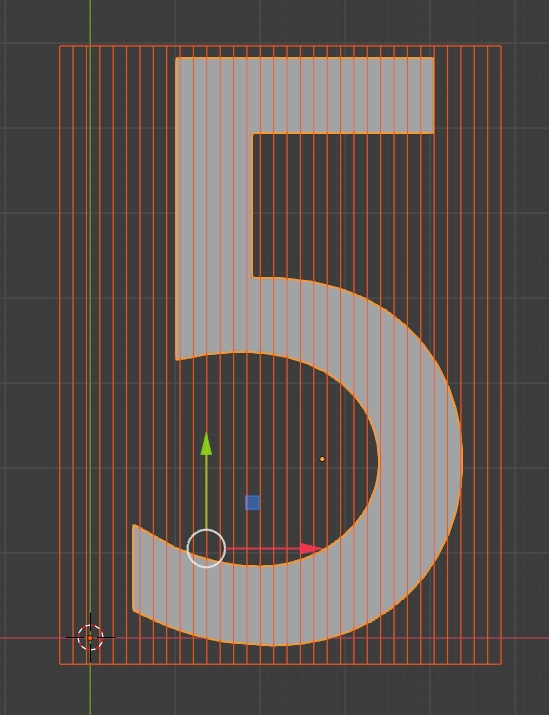 You end up with a vertical topology that allows you to bend the object. Give it Shade Smooth and Auto Smooth if you want a smoother result. If it still has bad shading you'll need to dissolve some old edges: 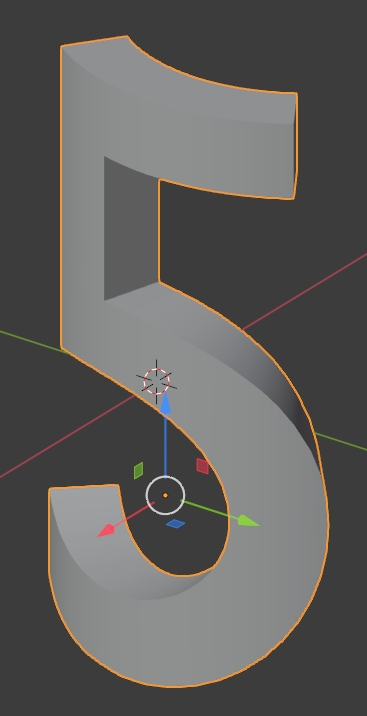 You can create your text, shrinkwarp it around your object and then before extruding go to:

Select all your faces of the text and use: 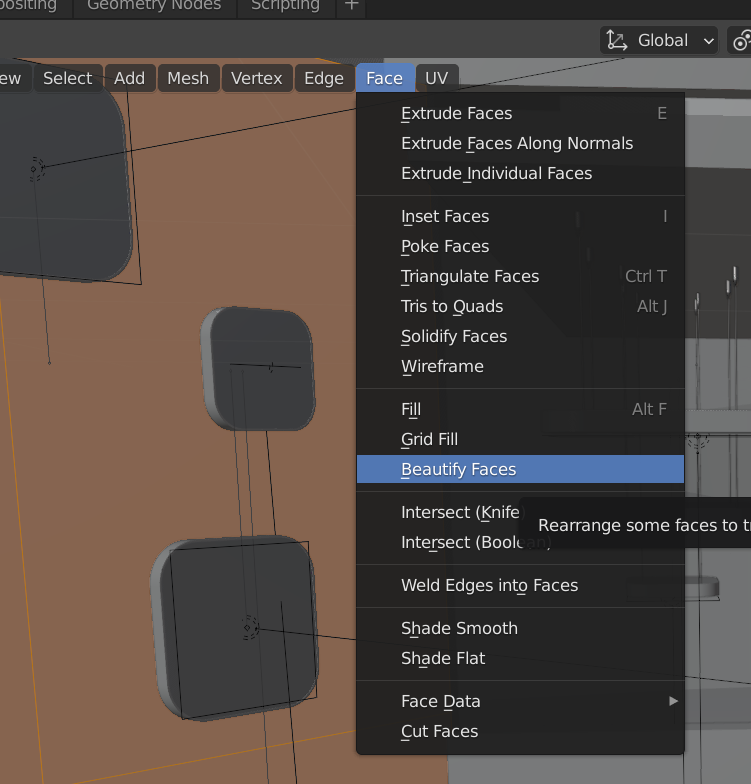 It will recalculate your faces in much better way, It always work for me when I have to make text or numbers.

But as I have said, I never use it on already extruded text, so try it and if it won't work... hopefully you will find another easier solution rather than making it again

Not the answer you're looking for? Browse other questions tagged mesh topology geometry or ask your own question.

2
What is the easiest way to smooth the intersection of two planes?
0
Combining low poly cone and disc
1
Is there a way to "virtually" rotate a face normal to get a different shade without actually rotating the face?
1
What methods can be used to cut irregular shaped holes in flat beveled surfaces with clean topology?
1
Reducing hard surface topology
2
Fix overlaps on a bent mesh - any automatic method?
0
Smooth shading on model causes weird artifacts
2
Why does my model's edges are too hard?