Is there a way to disable the grid in orthographic view?

I'd like to ask about grid lines in orthographic views. Can we somehow disable them from drawing? Right now I have to turn on "Render Only" which is not the best solution.

Open the properties region by pressing N. Then in the Display section uncheck the Grid Floor checkbox to turn off the display of the grid floor. 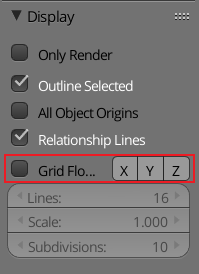 If you do not want to see the axis lines, untick the X and Y buttons as well.

I misread the question, thinking that the OP wanted to hide the grid visible in aligned views like Top, Side, Front, etc. If this is not the case, then David's answer is the optimal solution.

One hack you can do is change the 3D view grid color to match the background color, by copy/pasting the colors in ⎈ Ctrl⎇ AltU> User preferences > Themes:

Unfortunately it's not possible to get rid of the axis lines in the same way, as their color is controlled by a single global preference which affects the axis colors everywhere.

For anyone searching this feature in Blender 2.8 and onwards, its under viewport overlays: 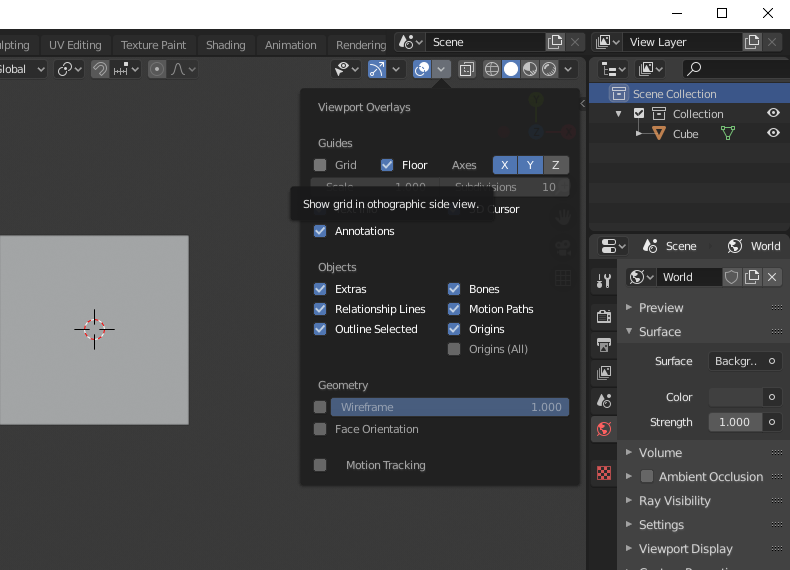 Go to the desired view, then press 4 on the Numpad followed by 6.

This makes the view go into an ortographic view about 15 degrees to the left, then back.

My hack is a bit basic but it was the only way in 2.76b that I could make it acceptable. Switch the grid floor back on first, then you can change the scale to 20 - trial and error to find a number that works for your model - and the subdivisions to 1:

This seemed to give me the easiest workaround in right, front, top and other aligned views. Note, the scale 20 worked on a small model but chances are good you may need to go up to 1000 to place the lines far enough part to be helpful.

Note, this hasn't gotten rid of all the grid lines in aligned views but spread them far enough part to get them mostly out of my way. It might help one of you here! Also switching grid back off makes no difference once you've done this, you just need it on to work the options.

The multiplicity of answers stems from loose use of terminology. Perspective is not a view (point), its a view projection, as is orthographic (projection); however, for many engineering types of folks, saying 'ortho' generally means "orthogonal" i.e. having to do with right angles...which insinuates X, Y, Z (axes) most of the time. So loose use of the terms "view" vs. "projection" has caused some confusion here....because clearly you can have some arbitrary camera view point in space, but that view can have an 'ortho' projection. An aligned view in Blenderspeak generally means a camera view that that is aligned with one of the primary orthogonal axes (top, left, front, etc), but note that such a view can be exactly aligned with a primary axes, yet still have either a perspective or orthogonal view projection. The inference of an 'aligned' view by most folks though, generally implies orthogonal projection, but not necessarily so. You can have an 'aligned' view with a perspective projection.....technically. If you look at the blender tip for perspective/ortho under the view menu...the tip does specifically use the term "projection" and not view.

So all that being said, the correct answer (for blender 2.79 anyhow) is the one with the least votes, by Adam Krol, i.e. set the scale value of the grid to zero. Do note that you cannot get rid of the primary axes lines in an "aligned view orthogonal projection" in 2.79. In 2.8, you can get rid of everything in said view/projection by unchecking the 'grid' box...but in doing so, will lose your primary axes lines also.

Not the answer you're looking for? Browse other questions tagged interface 3d-view customization or ask your own question.

2
set the view centered on an object
3
How to view subdivision lines in 3d perspective grid?
3
Background Images in the Right Orthographic Viewport Disproportionate to the Other Views
0
is there any way i can use crossview3d while editing?
0
Way to temporarily draw a uv grid over blender meshes?
0
Is there a way to display more than 7 strips/channels in video sequencer?