Okay, it's a bit of a crazy idea but... I have a sort of complex material where just certain bits have this hot magenta (no, it's not a missing texture) that needs to be toned down or maybe even replaced with another color entirely.

Sure, I could do it in Photoshop, but would rather address the issue within the material. Especially since materials that emit or transmit can get their colors on other objects in the scene, and also because for animations one would want to avoid the need for post-processing each frame in an image editor. (Also I like to go pure Blender whenever possible.)

So this now has me wondering (although it seems unlikely) - is there some kind of node setup that could target a specific color before it reaches the shader node and replace it with some other color? Perhaps also a way to adjust how specific or broad it is in capturing that color?

Kind of like what is possible with Select > Color Range... in Photoshop, for those who are familiar with that feature.

I'm thinking that with some clever combination of MixRGB, ColorRamp, and Hue/Saturation/Value, it might be possible. But I'm out of ideas beyond that. :-)

User Robin Betts has previously posted an answer that nearly solves my problem!

(Okay, it's not really a problem since I can fix my image in Photoshop, but it addresses the challenge.)

With some tweaking, I've prepared two node groups that are very similar to the one in that answer. Here they are in a .blend:

One replaces a color - not with a solid color fill, but instead using the "Color" blend mode in the MixRGB node. This one small adjustment made the result much more desirable for me, as variance in value is now preserved. 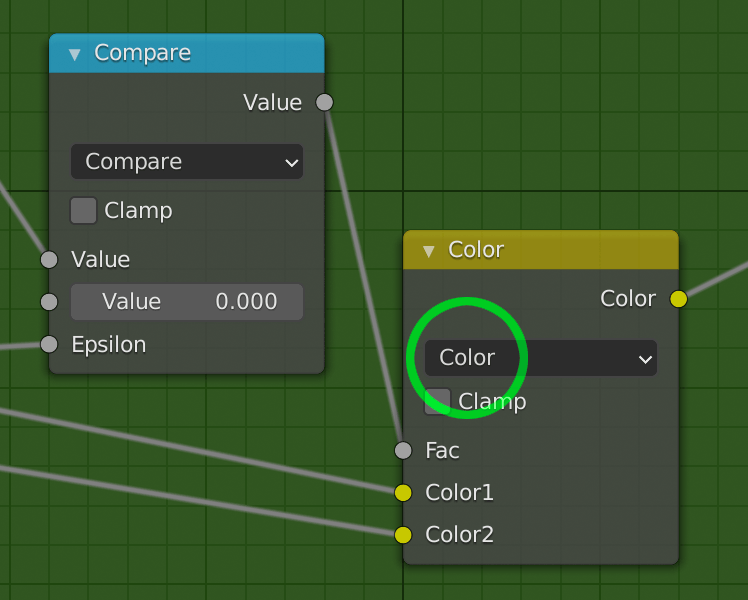 The other node group targets a color in the same way, but then shifts the hue in areas that have that targeted color. A different approach for doing something similar.

Each method has its merits, but just when I thought I had exactly the node groups I needed, I tested them on my original image and found that they don't work on high dynamic ranges of color. It appears the values climb out of reach and cannot be targeted.

I tried "normalizing" the RGB channels, which improved the result, but not completely nor predictably.

So now the question has become: How to replace a color even when its dynamic range is high?

What I've worked out to preserve high dynamic range, that is getting good-looking results (not sure if 100% accurate, but looking satisfying to me)... is to do the following:

I plan to clean up and put those nodes coming before and after the color processing into the group as well. Although I think seeing it this way makes it easier to understand.

Note the extremely low value on the group node's Influence slider, due to the extreme brightness of the magenta in my crazy material. ;-) Raising it much higher than this causes all colors to be replaced with the new color, in my case.

Not the answer you're looking for? Browse other questions tagged cycles-render-engine materials node-editor eevee-render-engine color or ask your own question.

10
Is it Possible to Dynamically Change Object Materals?
7
"Map Range" node equivalent for Material nodes?
12
Build color ramp out of math nodes?
4
What is an example of when I can use the 'Clamp' option in the MixRGB node?
3
Color palette as a replacement for the default color picker
2
How can I prepare a set of colors that should go together, and be able to apply them to different objects with a single click?
2
Material "Base Color" doesn't change when "Use Nodes" selected