Is Principled BSDF suitable for metals in terms of Fresnel?

My googling suggests that principled BSDF uses complex fresnel reflections for metallic materials even though the IOR parameters cannot be tuned:

Metallic materials have a very different reflectance curve vs. angle of incidence. This arises from the complex component of the IOR known as the coefficient of extinction.

A fully metallic principled BSDF node represents an unknown metal, in the sense that the complex component is unknown. Such a metal should have:

I don't see that. I see a perfectly specular metal with what appears to be no fresnel. I believe this is why online tutorials often plug a layer weight fresnel node into the principled BSDF node:

So is principled BSDF suitable for metals in terms of Fresnel?

I don't know how subtle metallic fresnel is. Is the shift in tint usually a shift in saturation, or an entirely new hue? It would be useful to side-by-side renders demonstrating:

There are a few complex fresnel shaders available online:

We can test the Fresnel response of the Principled BSDF. I'm testing in Cycles in Blender 2.93.0. There is no guarantee that Fresnel isn't handled differently in different versions.

Creating a 1,1,1 white world, and a 0.5 gray, 1.0 metallic, 0.0 roughness sphere and rendering with display device set to "None", we can see that the sphere is brighter at grazing angles than at direct angles: 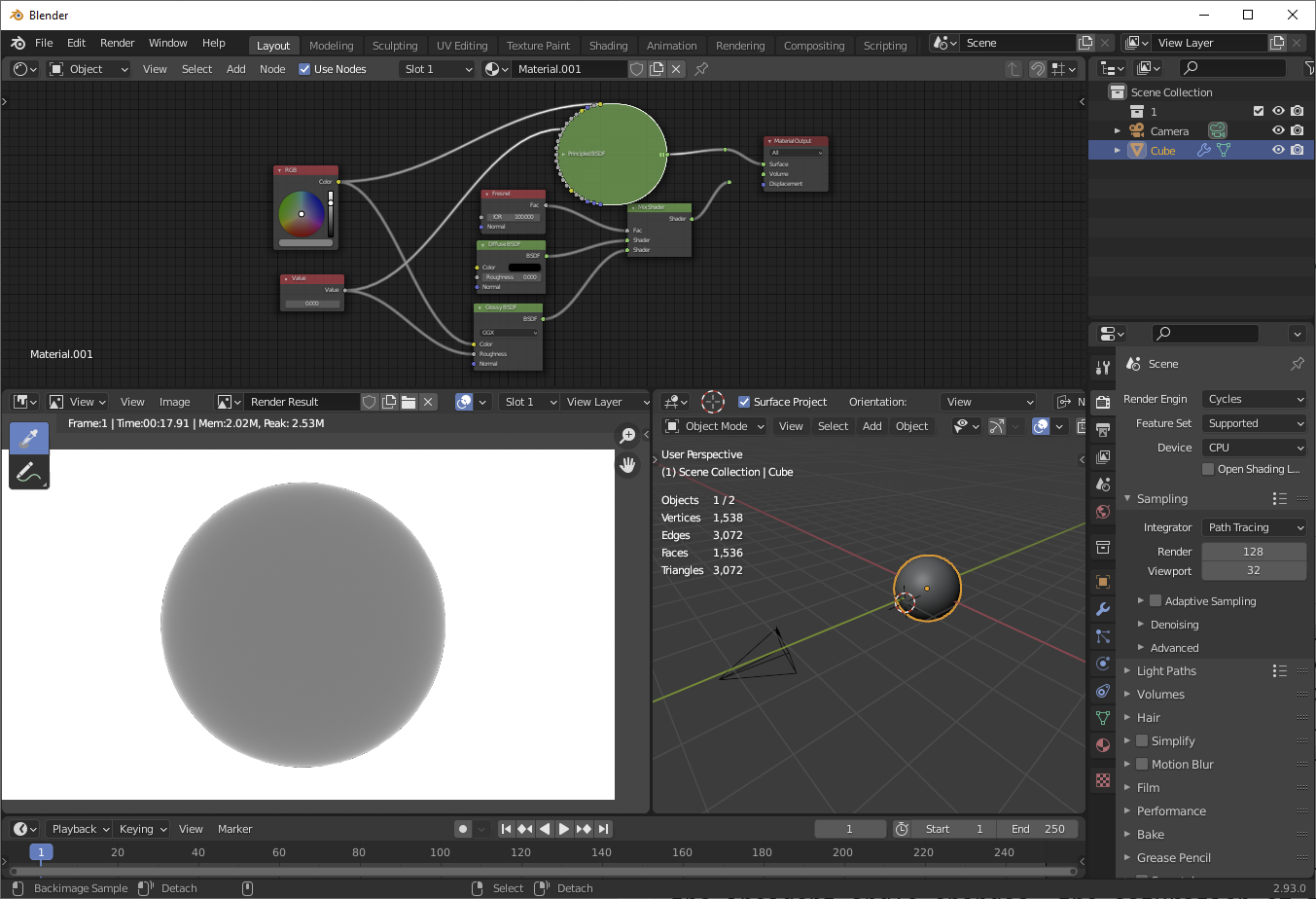 By sampling the render, I see that the value of the pixel ranges from 0.5 at the center of the sphere to 0.7 at the edges. (Which seems like a problem to me, because it's not conserving energy, but at least we've demonstrated Fresnel.)

If we repeat the test with a 1,0,0 red sphere, we'll see that the value of the render remains 1.0 throughout the sphere, but that the saturation of the reflection decreases at the incident angles. Again, this is not a realistic albedo, and unfortunately we're not conserving energy. Decreased saturation at grazing angles is built into the Disney Principled (upon which Blender's Principled is based.)

Testing in Eevee shows its own quirks that are somewhat different from Cycles, but the general pattern of Fresnel response remains the same.

You could certainly do something more realistic by using red, green, and blue glossies, multiplying them by a custom Fresnel curve, and adding them together. Still not perfectly realistic; in real life, the spectrum is continuous and unconnected.

Unfortunately, 3D rendering is a collection of abstractions and simplifications of reality. Macroscopic reality itself is way too complicated to calculate.

Not the answer you're looking for? Browse other questions tagged cycles-render-engine pbr or ask your own question.

2
Custom Fresnel Node for Specular Workflow
23
Custom fresnel curve
7
How to make a node group to calculate fresnel via F0 values
21
What do the settings in the new Principled Shader actually do?
2
Does fresnel node corresponds to fresnel-equations?
3
Adjusting specular for a metal
3
Where/How does the Principled BSDF incorporate Fresnel?