Geometry Nodes: Is it possible to connect point instances with curves? (Blender 3.0)

on my current scene I am trying to create a geometry node system that let's me distribute power poles along a street. The street is made of a curve and I can of course use that curve in combination with an array modifier to distribute my power poles and their cables along the street.

Now since the arrival 3.0 and the new geometry nodes with curve support, I was wondering if there is a smart way on how to distribute power poles or any other kind of object along a curve and additionally connect these object instances with curves/cables. Why would I want to do this? Well I was thinking about randomizing the power poles rotation, location and maybe even the scale to get a more realistic look in my scene. Having automatically connected cables between the poles would be the cherry on the ice.

Any ideas on how to approach this are welcome

With the current alpha, Yes.

Here be a curve

we resample him. then he be points of equal distance, along curv.

we convert curv to points. this lets us rotate them up, cuz otherwise they be lying down. 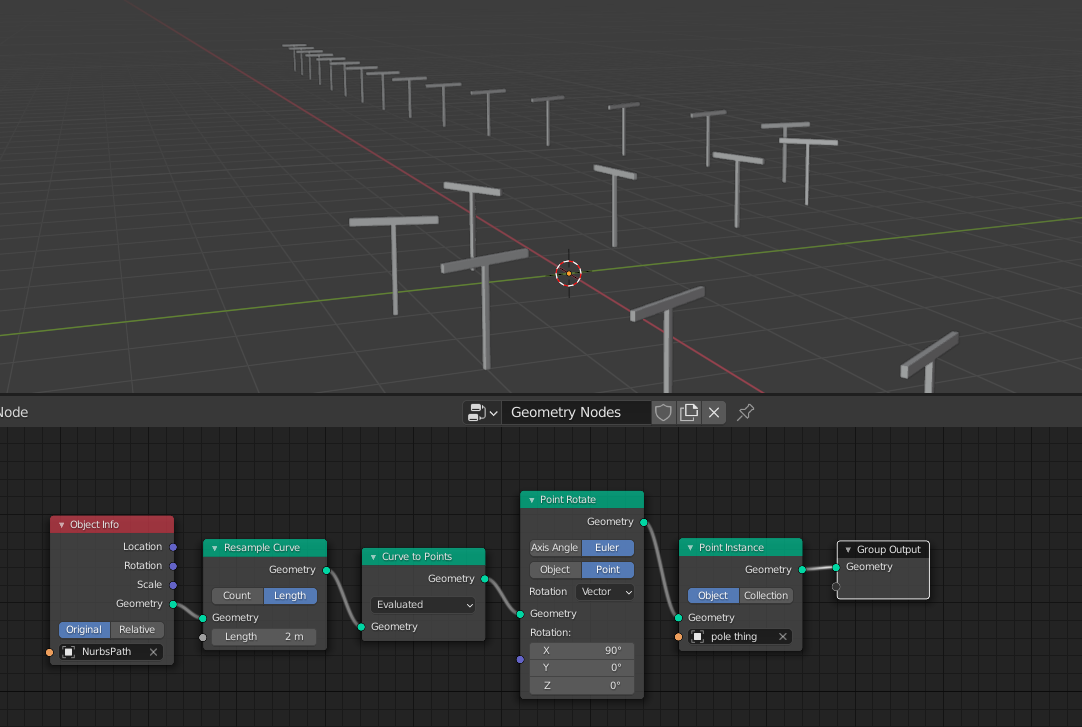 (then point instance as usual)

idk of any way to make new curv

but we don't need to! we already have a curv, lets just use him.

if you take the curv after resample, and you convert him to mesh, you get straight line between pole 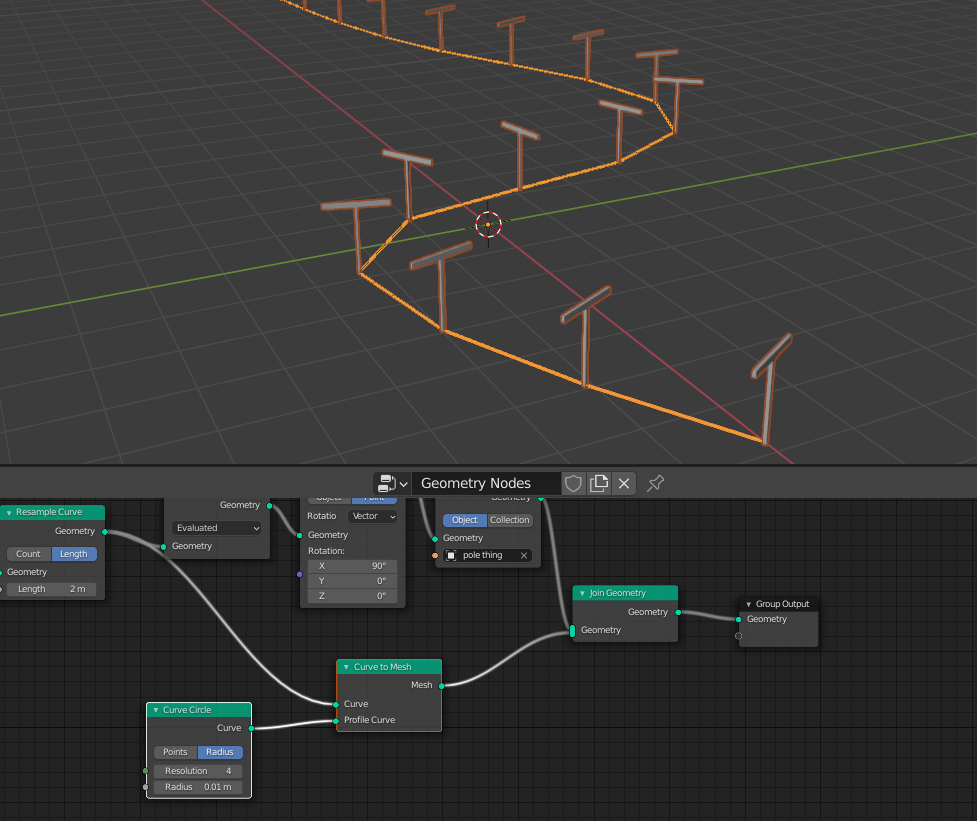 but there is problem. he is sleeping on ground. sad.

we bring him up by transform the profil curve

also, we can make two copy, one shift right and one shift left. then he look like power line. 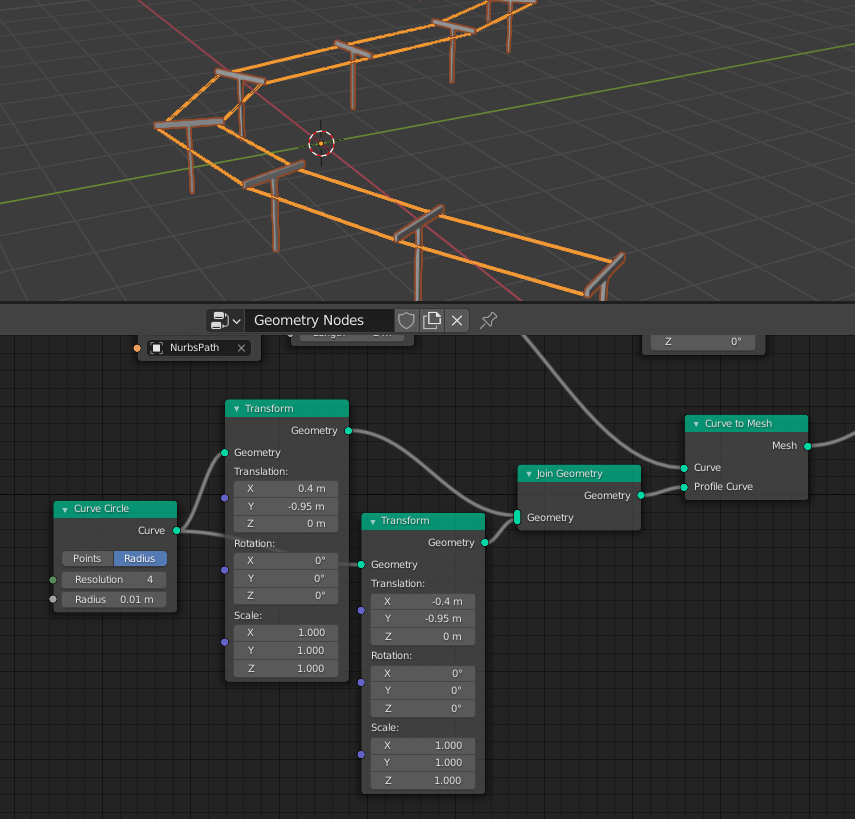 if you observ, you notice he is straight like uncook spagetti.

but how we cook?

if you don't like simple straight line, we need more points to make magic. remember the curv we resample? resample him again to have more point.

now how do we transform these point? we want the point that is far away from pole to be more down.

we calculate proximity between the many point and the poles: 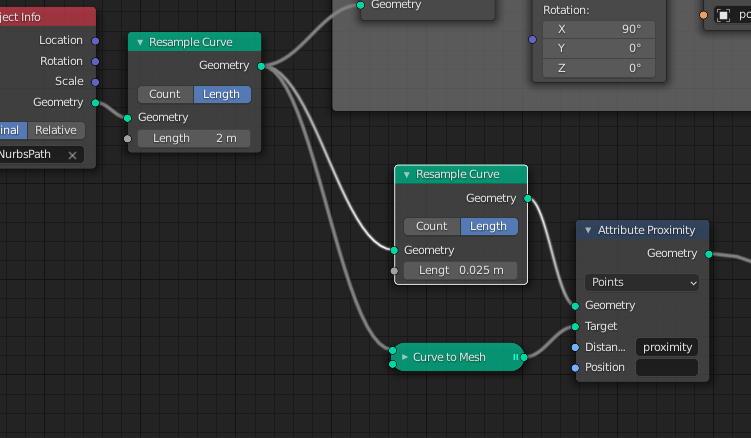 nothing will happen, but now the proximity live inside attribute named "proximity"

we can use him to push some point down.

now take a vector that point down

scale him by "proximity".

and add this vector to the point "position". 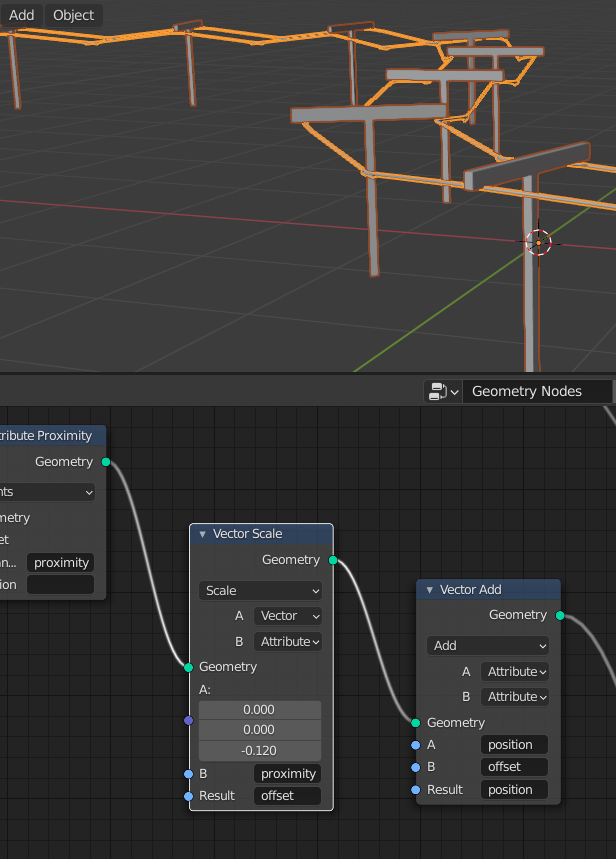 but he still look kind of wonky

is better to add "attribut curv map" to the proximity instead of using him direct. 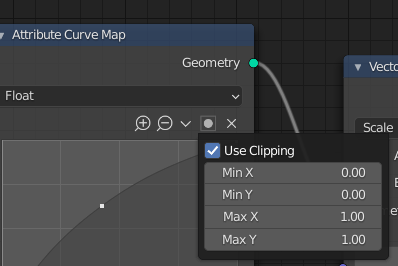 look we finished. we make pole with wire in attribute node! 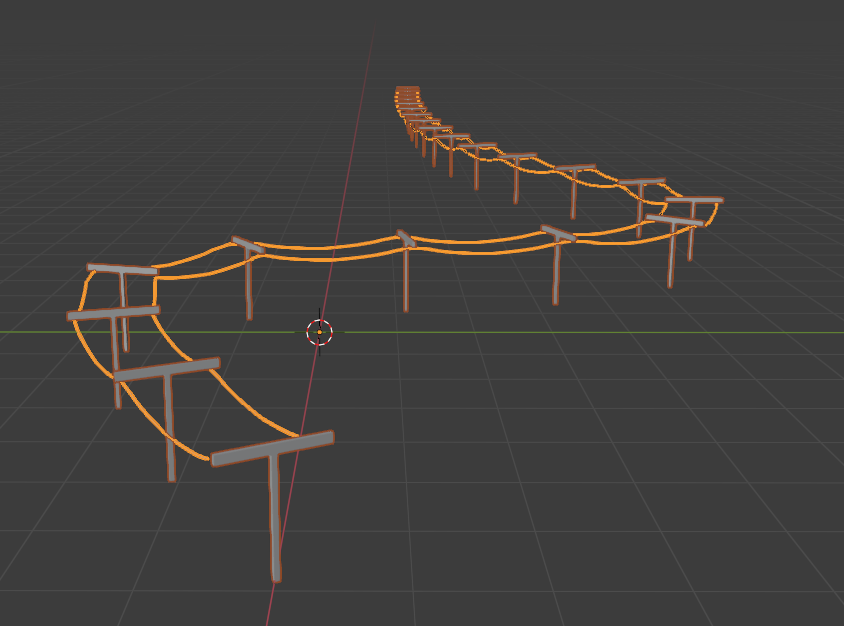 and here is final nodes in case i not explain something good. 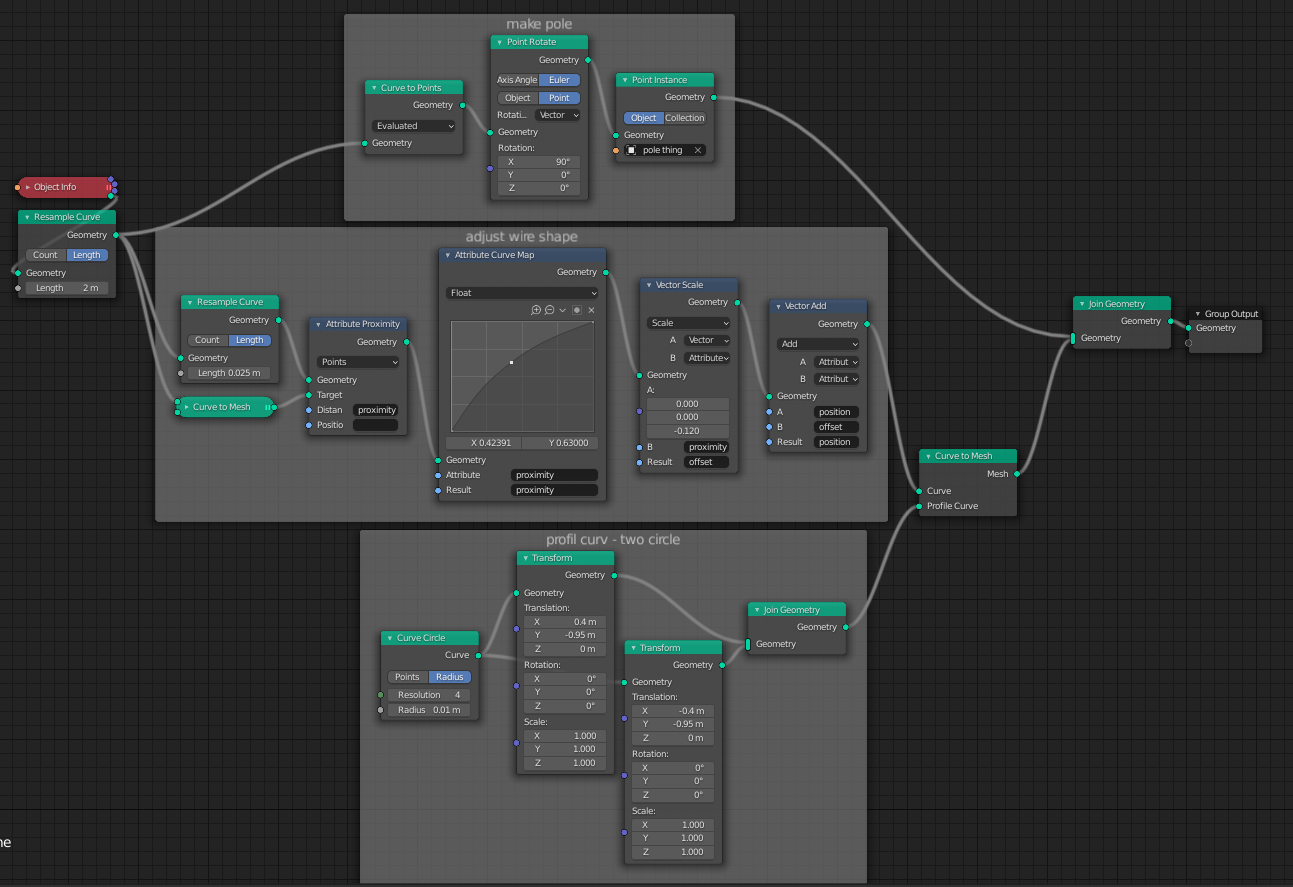 after Chris feedback, i find out way to reduce wonky issue

he is cause by transformed profil curv. becaus profil curv is so off-center, he is causing self-intersect geometry. completely remove the y offset from the profil curf

instead, transform result geometry by transforming it on z: 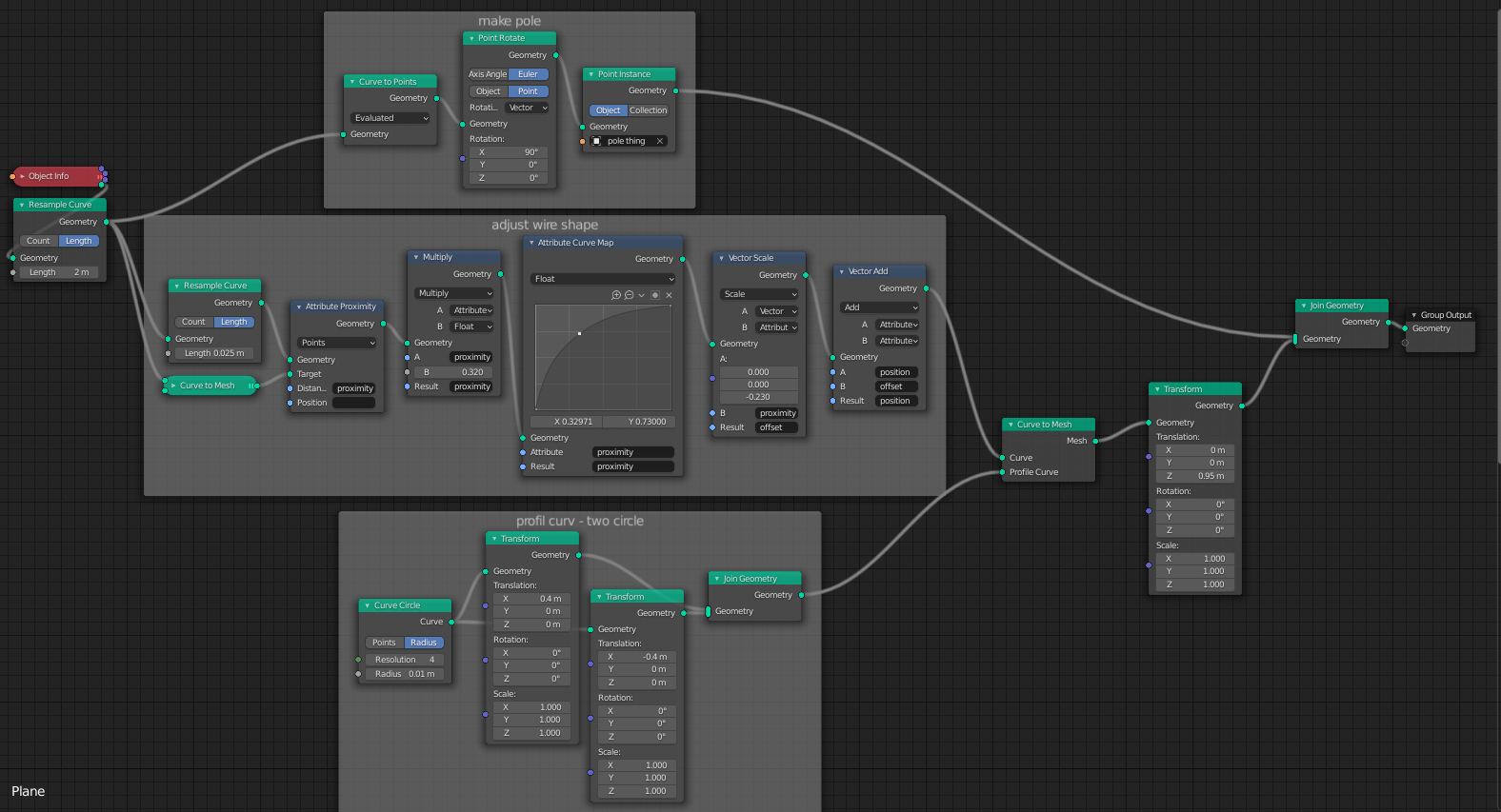