Follow-up of this question How would I be able to control the falloff of a node setup like this?

Currently, This does this:

I want to be able to control the falloff of a thing like this. how would I be able to do this? Thanks! 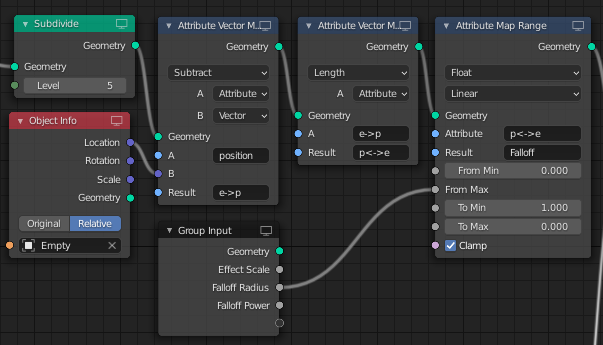 The effect that's being faded, here, is the movement of vertices away from the Empty (i.e. movement along e->p). Now we have a 0 -> 1 falloff, we can multiply that vector by a scale of the falloff, and add it to the position...

Above, Falloff is also raised to a power, to provide some option in falloff's curve. You could get more control by using an Attribute Curve Map node instead of the Power, but I haven't found a way to present that curve to the user in the GN modifier.

This gif shows change in Radius.

This one, Power, and Scale.

Not the answer you're looking for? Browse other questions tagged node-editor transforms geometry geometry-nodes or ask your own question.